A practical guide forward for progressives on healthcare 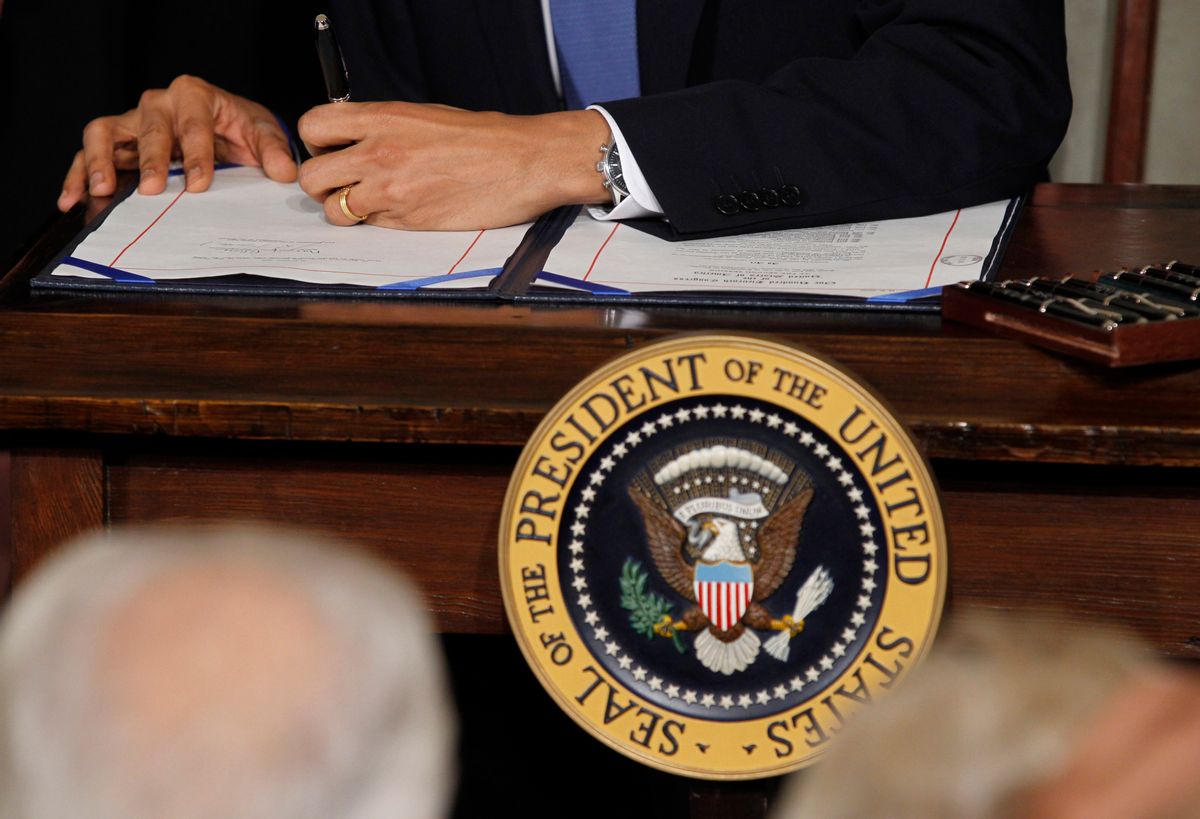 Two months after it became law, many progressives are still simmering over healthcare reform, convinced that it did too much for private insurers and too little for average Americans. The stakes are high: Demagogues on the right are whipping up fear of the new law in hopes of big gains in the November elections — and counting on progressives to stay home.

It would be a tragic mistake for progressives to play into the right's hand like this. While we share the long-term goal of a universal "Medicare for all" system, too many on the left are ignoring the important improvements to access and quality of care that the new law will achieve — and the policy space that it creates to go further in the future. In particular, we believe four major myths have unduly undermined progressive enthusiasm for the new law:

Myth: Progressive activists should ignore or undermine the new law, which will get us to single payer more quickly.

Reality: An effective political movement requires both idealistic foot soldiers and politicians capable of achieving the art of the possible.

For now, this means fighting hard to protect what we’ve gained while also fighting for more on the public option, on abortion and on immigrant inclusion. Building the power to change the system involves winning victories that make a real difference in people’s lives, thus encouraging them to fight on. With healthcare reform, Democrats won a huge victory, fueled by millions of activists who need to get a pat on the back — and then get back to work. Women in particular have important reasons to stay active, including the need to defend new laws that prohibit insurance companies from discriminating against them.

It's also worth remembering that sitting out this fall's elections because of healthcare reform would mean handing control of the country back to the most extremist Republican Party in history.

Myth: The new law won’t save money because the insurance industry is still standing.

Reality: The law begins to address the major drivers of excess healthcare costs: the overuse and high prices of new technologies and drugs, and social and economic inequalities.

The health insurance industry is predatory, dishonest and parasitic. It contributes to unnecessary administrative complexity that drives up costs. We’d be better off without it. However, it has had the unenviable and only faintly achievable remit of negotiating with the rest of the healthcare industry, which is equally inefficient.

The new law gives us a lot to work with. We spend 16 percent of our GDP on healthcare, more than any other industrialized country, but our health outcomes are worse than most of them. Americans use fewer doctor visits and prescription drugs; we just pay much more for every procedure and every prescription. The U.S. trains more specialists, who charge more than primary care clinicians and also drive some of the inappropriate use of acute care. As a result, the U.S. experiences more hospitalizations for chronic illnesses like hypertension and diabetes — conditions that could be prevented and treated at a lower cost and with better results by appropriate primary and preventive care. And maternity care that underutilizes midwifery care frequently results in worse outcomes.

The cost-control torch ultimately needs to pass to the government, the only purchaser with sufficient countervailing power to negotiate effectively with the drug, hospital and medical device industries, and with clinicians. This is what a single-payer system would do, and the new law punts on this part. But it does use the power of Medicare and other government programs to shift toward system changes that control costs by improving quality. These changes include making comparative effectiveness research available and expanding primary care and prevention. It sets a global budget for Medicare, which must be achieved without reducing benefits or increasing costs for beneficiaries.

The other significant driver of our crummy health outcomes is the social and economic inequalities that derive from our Wild West brand of capitalism. Expanding coverage for more affordable healthcare will smooth some of these edges and improve health.

To be clear: Without a national budget of some sort, money saved through these policies will likely be shifted and spent elsewhere in the healthcare system. The pilot programs that the new law creates will provide lessons for how to improve care while reducing costs — valuable information for future reform efforts.

Myth: The insurance industry is still standing because President Obama made a backroom deal.

Reality: The president made a well-publicized deal with the entire healthcare industry, which is still a force to reckon with.

The healthcare debate revealed and reinforced important information about where power resides. Vast swaths of the U.S. are still in the grip of Republican or ConservaDem representation in Congress. Democratic campaign funding schemes bolster this arrangement by siphoning party funds from progressive to Blue Dog candidates. Progressive challengers are sprouting up in primaries around the country in response. (Bill Halter, take a bow.)

The healthcare industry accounts for one-sixth of the U.S. economy and remains enormously powerful. It includes pharmaceuticals, insurance, medical devices, hospitals and other institutions, and some groups of clinicians. Employers know that they pay less for healthcare in other countries with more equitable systems, but keeping healthcare benefits rooted in employment helps to discipline workers, who might otherwise unionize or change jobs. And more than ever, the corporate-owned, corporate-dominated media are a barrier to any meaningful population-wide comprehension of why patients and the public are being fleeced and abused, and what can be done about it.

Among the key players in the debate, on both sides, there just wasn't an appetite for major changes in how the system functions. For instance, some of the stronger unions are firmly ensconced in the same hospitals whose budgets would likely take a haircut under more substantial reform.

Remarkably, the public stuck with the issue, breathing life back into the public option time and again. As late as February, the netroots mobilized 1.2 million contacts to Congress on a single day. But no organization ever had a credible strategy for mobilizing the massive uprisings required to get rid of the insurance industry, nor did any uprising materialize spontaneously.

This left the fulcrum of power for change at the White House. Clearly, the White House calculated early on that it needed to buy all possible peace from the healthcare industry and the U.S. Chamber of Commerce. Doing so would give it time and space to nudge the issue into the public’s view long enough to establish support, before the inevitable attacks flooded the media (which they ultimately did). In the end, the administration and congressional leaders reasonably calculated that the whole enterprise could evaporate at any moment, and they didn't want to gamble on losing any votes.

Obama's reluctance to push for a bolder final law — one that included the public option, abortion and immigrant inclusion — was surprising and disappointing. But in the end, progressives should appreciate that he overcame obstacles that have sunk every reform effort over the past 100 years and managed to sign a bill into law. Now the challenge is to build on the law — to recognize the institutional changes that the law enacts, while pushing for more fundamental reform.

Myth: The country is ready to go for a Medicare-for-all single-payer system, run by the government.

Reality: The country has mixed feelings about the government. While only the public sector can truly create affordable coverage for quality care for everyone, we need to contest with corporations for the policy direction of the state.

Progressive movements in the U.S. have often battled both the government and capital. The New Deal and the Great Society marked a coda in U.S. history, characterized by aggressive activism by the federal government in the interest of the majority of the population. This heritage, perhaps now resuscitated by the Obama administration, was damaged by the “credibility gaps” of the Vietnam era, undermined by the Reagan years, and ravaged by the Bush administration.

Since 1980, the prevailing economic agenda has represented the triumph of "free" markets. The exercise of state power to defend corporate interests has been presented as a benefit to society at large: It preserves our individual freedoms and the "right" to buy an unlimited array of cheap products. In return, we are asked to consent to cuts in taxes, social services, and spending on education and health, under the pretext that it’s good for us to compete for these basic human necessities.

It is possible that within the confines of the law we just passed, a law that is both compromised and a compromise, the Obama administration intends to introduce accountability and responsiveness to the public into its healthcare policymaking. Health and Human Services Secretary Kathleen Sebelius is seeking public comment about her regulatory authority to set insurance rates. She is deciding how to define "unreasonable" rate increases and whether in fact all rates should be regulated. These are important issues that advocates and the public can and should be addressing.

Where to From Here?

With the new law, we have won policy space to further challenge corporate control, including control of the healthcare system. Limits on the insurance industry’s ability to bilk and fleece the public now include: laws; an energized public that wants to see the laws enforced; and an administration that has already taken enforcement action and gives every indication of continuing to do so. We have won major advances in coverage for healthcare and maybe for affordability.

The short- and longer-term benefits of the law could discredit the scare tactics at the center of the Republicans’ campaign to repeal the law within months. The Medicare program will not go broke at a faster rate but will be sounder financially, as will our economy overall. The misgivings expressed even by the likes of Obama supporter Merle Haggard — “I’m afraid we just can’t afford it” — should give way to the preponderance of evidence that the law will in fact reduce the deficit, once it trickles out. Many benefits will begin to roll out immediately, including lower prescription drug costs for seniors and expanded coverage for young adults. Little will change — as promised — for the overwhelming majority of Americans who are covered by self-insured or commercial health plans through large employers.

Progressives need a strategy that combines jiujitsu with direct action, and that distinguishes between necessary compromises and sellouts. We have to reach out to congressional districts currently represented by ConservaDems or Republicans and win over some of the population that straddles the middle of the road. Our culture of political debate should aim to attract and develop supporters who are savvy and well-informed to surmount the formidable obstacles we face. Progressives must move forward together. We still have the same goal: equitable, quality, universal, affordable healthcare.

Ellen R. Shaffer, Ph.D., MPH, is co-director of the Center for Policy Analysis, which sponsors the EQUAL campaign for Equitable, Quality, Universal, Affordable healthcare. Judy Norsigian is the executive director of Our Bodies, Ourselves in Boston.