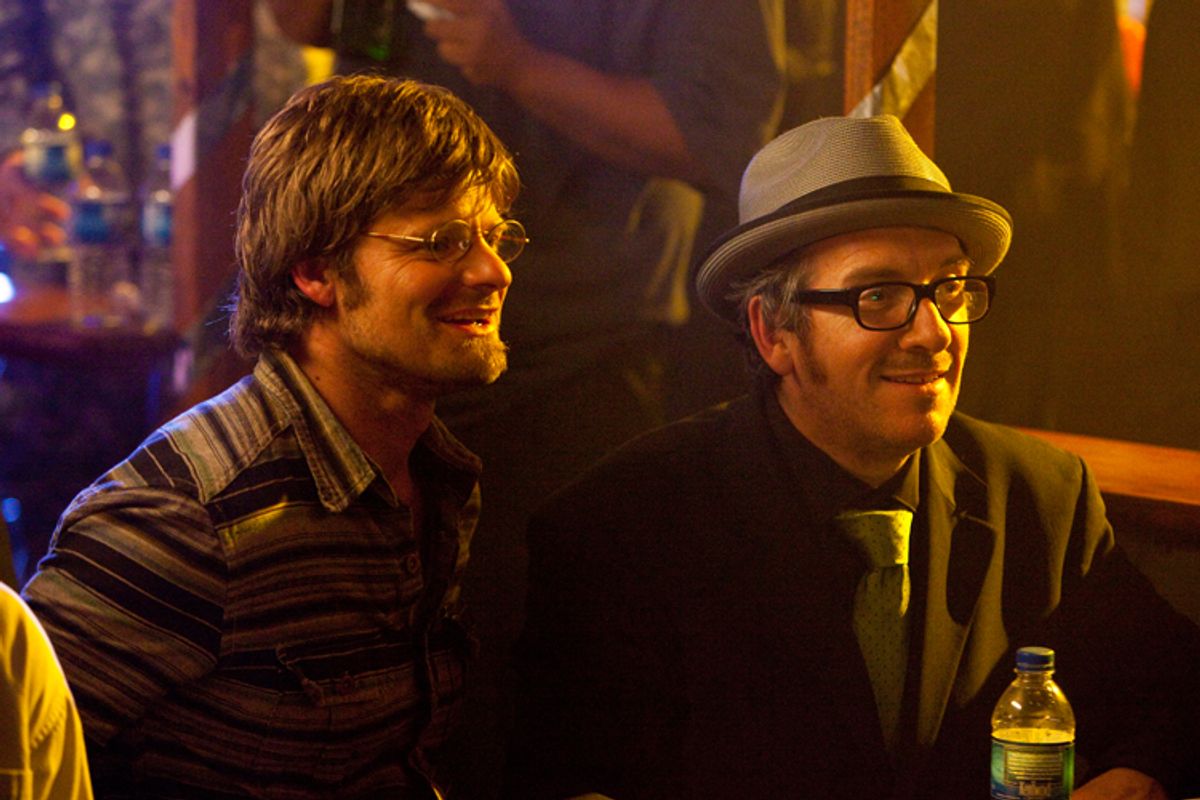 "The flooding of New Orleans was a man-made catastrophe. A federal fuck-up of epic proportions." -- Creighton Bernette (John Goodman) of "Treme"

No one will ever fault HBO's "Treme" for not being ambitious enough. But sometimes when you try to tackle a Great Big Idea directly, it slips out of your fingers like a greased bowling ball. This is the trouble with big ideas in general. Even Shakespeare delayed rolling out the heavy philosophical artillery until after the punning jesters had pleased the ruffians in the pit, the young romantic's waxing poetic about his lover had delighted the ladies, and some nefarious plot had been hatched. Despite the ways it lingers on the sights, sounds and sensations of New Orleans -- as well as the anguish and longing of its inhabitants in the wake of Katrina -- "Treme" can't resist pouncing right on top of the gigantic question of What Went Wrong Here, and this otherwise nuanced story wobbles under the weight of such an ambitious inquiry.

That said, it's impossible not to savor "Treme's" patient pace, its delirious, swooning love of great music and live performance as scrappy, spontaneous art, its delight in the simple pleasures -- great food, drink, spirits, dancing in the streets -- that the city of New Orleans elevates to its raison d'être. Even though the road here is so littered with potholes that you can't smoke enough ganja to avoid being rattled by them, "Treme" pushes the envelope on several fronts, testing our tolerance for unorthodox storytelling, pivotal characters whose intentions are far from pure, and ethical questions that stubbornly refuse to resolve themselves into neatly packaged morals. But the show's main challenge may lie in the very particular tonal whiplash it inflicts on its viewers.

Now rest assured, much of the dialogue here is just as sly and smart as the most unforgettable exchanges from "The Wire," and once again, some of the most memorable scenes are those in which very little action or plot development occurs: We encounter a rambling, light conversation between Ladonna (Khandi Alexander) and Antoine (Wendell Pierce) at Gigi's, enjoying the evening and the song on the stereo; we witness a tense exchange between Albert (Clarke Peters) and Lulu, the nice lady down the block that unexpectedly blooms into flirtation; we take solace in a mutually respectful moment between the Japanese jazz fan and Antoine that brings a nice resolution to a night of mutual confusion.

But just as we're lulled into the grace of these thoughtful pauses, here comes Davis McAlary (Steve Zahn) with his sputtering outbursts about the city going to shit, a surge of verbal wanking that rips us out of this formerly visceral moment. Next there's Creighton Bernette (John Goodman), the reluctant Lorax of New Orleans, assuring us, "I'm not trying to be the spokesman for the city. New Orleans speaks for itself." But it's too late, we've already seen his YouTube videos and heard his angry ranting at the TV reporters, and now we're listening as he titters nervously over whether or not Roy Blount (whose pen spews "butter" according to him) is bullshitting him with his high praise. Somehow we don't buy big, blustery Bernette as the type to be shocked and confused by all of this attention, and his humility feels a little forced.

But this disconnect between professed stances and underlying actions underscores some essential trouble with "Treme" -- something in its moody, inconsistent ways, something in its tendency to ricochet between silence and big, showy speeches -- that makes the story feel slightly off-kilter. As viewers, we find ourselves jerked between slow, restrained scenes that speak for themselves -- live music and street parades and understated exchanges -- and meticulously scripted, overwritten bursts of aggression from the show's pivotal mouthpieces. David Simon and Eric Overmyer are in love with New Orleans, sure, but they're also in love with words -- angry words, big words, curse words, technical words -- about what's happened here. These words – their ferocity and speed, their disconnection from the matter at hand -- tend to jostle us loose from this moment, distance us from the action, alienate us from what's actually happening on the screen. Every time the writers insist on harpooning big ideas and dragging them up the beach to be butchered into a thousand wordy morsels, it's as if Sampson and Gregory are halfway through their witty first scene when Romeo interrupts, waving a vial of poison around and rambling on about how dry sorrow drinks his blood.

On the one hand, this is probably a necessary hazard with a TV drama as sweeping and experimental as "Treme." And aren't our small screens crowded enough with meticulously plotted but skin-deep stories for us to place little importance on some steady smattering of clues or twists to keep us interested? Unfortunately, "Treme" presents a simple looming question -- what happened to Daymo? -- that isn't compelling enough to last through the first season. We haven't met Daymo, except in Ladonna's dream, so we hardly have much of an investment in the outcome there. Although it's difficult not to want Ladonna to find some peace, her relationship with her brother isn't clear enough for us to feel anxious over whether the man is alive or dead.

It's also troubling that the primary dramatic actions in the story have no real consequences. Albert finds the kid who stole his tool box and beats him to a bloody pulp, landing the kid in the hospital, but there's only one conversation that alludes to this violent twist, and Albert is free to go back to chatting amiably with his new lady friend for several episodes. Although "The Wire" was studded with consequence-less, senseless violence, its own way of subverting the moralistic TV tradition that demands that every crime has a demonstrable price attached to it, on "Treme," Albert's beatdown is this isolated violent act that seems to beg for retribution. Even if this is the reaction of a victim of a brutalized city, we're not nearly as convinced of Albert's essential character as we might've been of any of the flawed but well intentioned figures on "The Wire." He's a tough, charismatic leader who is disgusted by laziness and cutting corners, and (like so many of the characters on this show) he's seriously pissed off. For Albert to take such regrettable action without it haunting him for the rest of the season feels a little off. Even if the kid resurfaces in the last few episodes, the thread of this story has already been lost, and Albert's apparent disregard for the whole thing makes him far less likable than he would be otherwise.

Likewise, "Treme's" tenacious focus on regular folks is constantly undercut by the unrelenting parade of big names that traipse in front of its cameras. Is a joke about Delmond's (Rob Brown) girlfriend's "exceptions to monogamy" list made more funny when he discovers all of her favorites at the same party that night? Or does it propel the viewer back into an alienated state of celebrity rubbernecking, a far cry from the hunger for authenticity that's a big part of the show's premise? Do we need Tom Colicchio, David Chang, Eric Ripert and Wylie Dufresne to show up at Janette's (Kim Dickens) restaurant, complimenting her food and flirting with her, so we know what a good chef she is? Or does it just make us feel like someone flipped over to "Top Chef Masters" when we weren't looking? For a story about the struggles and small victories of ordinary people, there sure are an awful lot of millionaires and megawatt stars floating around these parts.

"That’s New Orleans!" you say? Well, whether it is or it isn't, this flow of cameos (and the underlying, unspoken hint that we should recognize every last one of these people or figure it out, tout de suite) never seems to let up for a second. Not only that, but it jolts viewers out of enjoying each scene on its own (often considerable) merits.

Clearly, "Treme" aims to make bold choices on several fronts: presenting characters that are less than lovable (Sonny [Michiel Huisman] the dirtbag druggie boyfriend may be my least favorite), leaving storylines to simmer slowly or even grow cold and congeal, presenting characters as pawns or cathartic figures with very few actual lines (the bouncer from Baton Rouge who becomes Sonny's roommate), or bouncing from one subplot to the next without any clear theme to each episode. In many of its pursuits, "Treme" succeeds. But the same bold strokes and passionate choices that give this show the swagger in its step and the sweetness in its slow moments also bring some awkward missteps -- and maybe even a stubborn refusal to pull back on the throttle occasionally.

The rocky ride of "Treme" is epitomized by the last scene of "Shallow Water, Oh Mama": Dressed up as sperm with her husband and daughter and marching happily in a Mardi Gras parade, Toni Bernette (Melissa Leo) gushes, "Where else could we ever live, huh?" In that moment, we understand how it must feel to abandon yourself to the odd whims of this carefree and cruel city. Then, a minute later, the camera pans back to an unnerving papier-mâché replica of Mayor Ray Nagin with a giant hard-on. Roll credits. Maybe such ambitious, reckless choices are meant to match the wildness, vulgarity and whimsy of New Orleans and Mardi Gras themselves. Sometimes, this bumpy ride feels exhilarating; other times, you just want to tell everyone to sober up and keep it in their pants.