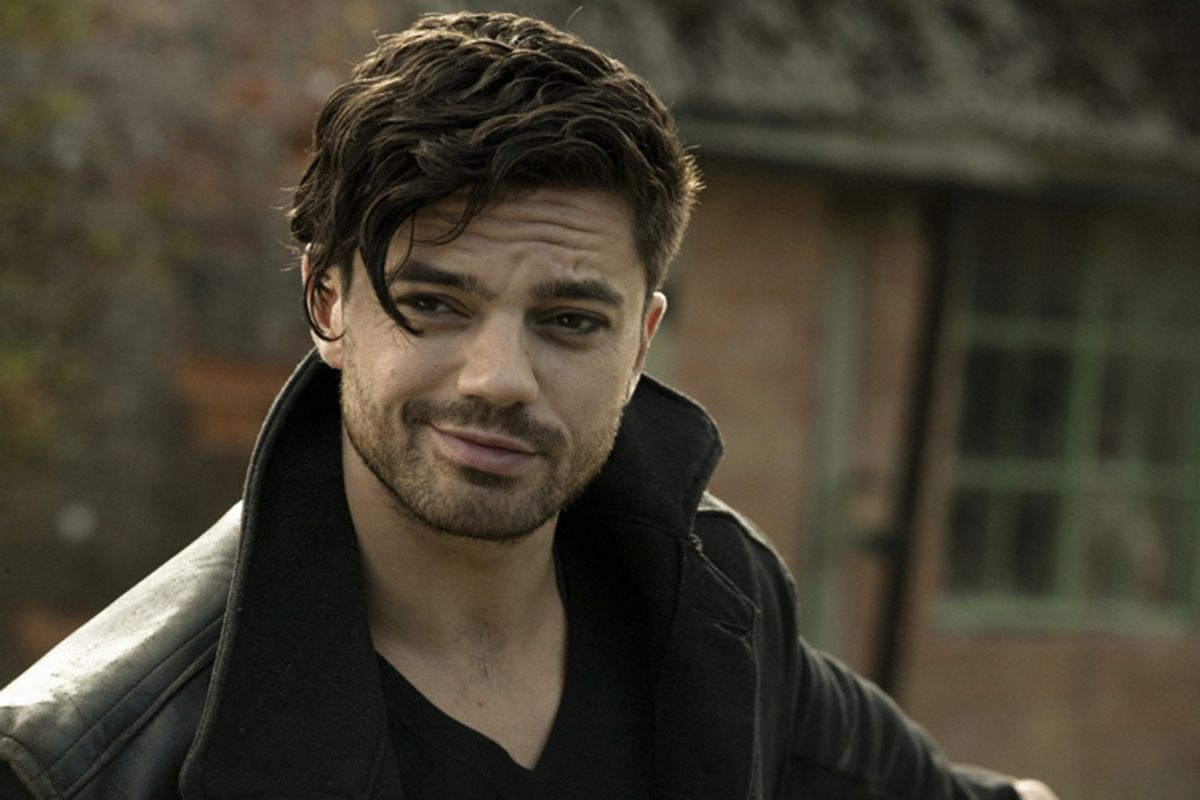 CANNES, France -- I'm not going to try to sell you Stephen Frears' new film "Tamara Drewe" as a masterwork of modern cinema or anything, but this brightly colored, country-house sex farce was definitely a welcome treat at a festival loaded with art-house heavy lifting. Based on a popular British graphic novel by Posy Simmonds -- which is itself based, implausibly enough, on Thomas Hardy's "Far From the Madding Crowd" -- "Tamara Drewe" stars Gemma Arterton, a young actress suddenly ubiquitous in Brit-cinema, as its eponymous heroine, a one-time ugly duckling who comes back home to Dorset as a sexually liberated writer with a new nose and form-fitting denim cutoffs.

Officially, Tamara's back in the green and pleasant English heartland only to fix up her mom's cottage and sell it off -- likely to some "wanker-banker" from London -- but many adventures await her, most of them wearing trousers. Local lad Andy Cobb (Luke Evans) is handsome, capable and upstanding, and he's been pining for Tamara ever since they broke up as teenagers. But if her love life were that easy to figure out, there'd be no movie. She's also got to contend with the Bad Boy, black-clad rock god Ben Sergeant (Dominic Cooper) and the Married Man, pompous mystery novelist Nicholas Hardiment (Roger Allam).

There's never the slightest doubt about where "Tamara Drewe" is going, and as with so many of Frears' well-crafted films, the pleasure comes in the details. Lovely as Arterton is, she's very nearly upstaged by Tamsin Greig as Beth Hardiment, wronged wife to philandering Nicholas, who is first a comic and then a triumphant symbol of womanly English suffering. Bill Camp is terrific as a nerdy Yank academic (a Thomas Hardy expert, ha ha) who rises to unlikely heroism, and 17-year-old Jessica Barden plays the delicious, malicious Jody, a teenager whose obsession with rock-star Ben drives many of the plot's collisions and mishaps.

At a press lunch with American journalists on the Cannes beachfront, Frears was both irascible and jolly, seeking to avoid any appearance of artistic pretension. He prefers to see his long and varied career, from "My Beautiful Laundrette" and "Sammy and Rosie Get Laid" on through "The Queen," in terms of a man doing his job. "My father was a doctor who went to work 50 weeks a year," he told us. "That was what I was raised to believe a man did: You go to work."

Frears was famously crusty as president of the Cannes jury three years ago -- they gave the Palme d'Or to "4 Months, 3 Weeks and 2 Days" -- and when I asked him what he'd learned from that experience, he cracked, "I learned that at Cannes, it's better not to be in competition." (Indeed, "Tamara Drewe" isn't.) "In a way, I don't like film festivals," he added. "I like going to the cinema and sitting on the edge of my seat. Film festivals -- you know, they can ghettoize the whole thing too much."

Before we sat down to lunch, I spent a few minutes on the beach chatting with Dominic Cooper (video below), the fast-rising stage and screen actor who plays rock star Ben Sergeant in "Tamara Drewe." Cooper has been the focus of intense tabloid and blogosphere speculation over the past week after splitting with former girlfriend Amanda Seyfried and keeping company at Cannes parties with Lindsay Lohan, Seyfried's costar in "Mean Girls."

As Cooper quipped after I turned the camera off, Ben's role for Tamara is that of pure boy-toy. "He adores her, but he can't really understand her. She's far too intelligent for him. Basically, he's a human vibrator." Cooper no doubt has human-vibrator potential himself, but he also comes with impeccable acting chops. His background in London theater and British TV is extensive, along with recent movie roles in "An Education," "The Duchess" and "Mamma Mia!" In his next film, "The Devil's Double," he plays both Uday Hussein and the man forced to impersonate him, and he's also slated to play Howard Stark (aka, Iron Man's father) in the upcoming "Captain America."

Are you enjoying yourself here? I get the feeling it hasn't just been work.

Oh, no, I'd definitely be lying if I said it was just work. It's madness here. I've never seen anything quite like it.

Have you been to Cannes before?

No, I've never been to Cannes. It's stunningly beautiful. I've never seen such opulence, or such ridiculous houses floating in water. I had the opportunity the first night of going to one particular one that had a yellow submarine attached to the bottom of it. You had to get a boat almost as big as the boat we were going to, to get to it. I've really never seen anything like it.

It's good fun but there is a bit of work to be done. It's quite a scary place to show a film for the first time, in front of a huge and very cultured audience, an audience that really knows film. Especially a comedy where you're getting an immediate response from the audience. You know, if they don't like it they won't be laughing. You hear whether they like it or not. Thank goodness they were.

And you have the red carpet stuff, which from the outside looks terribly glamorous and fun, but is actually quite awkward. You're ushered around, treated like cattle, a chunk of meat that's ushered from one position to the next. And if you don't particularly like getting your photo taken, it's utterly painful. But at the same time it is exciting and the adrenaline is there and you're proud of the film that you're in. And they seem to love it, don't they? So it's actually a very exciting experience.

I thought "Tamara Drewe" was a nice change of pace for the Cannes audience. It's a little lighter than most of the fare here.

I've heard that they needed some light relief, actually. You can forget that you are making entertainment, and it's to entertain people. I love a good dark, hearty take on the world, and it has its dark moments, this film. It's a commentary and observation of middle-class people and the terrors that they're up to. They've lost their moral compass, really, and they're all lying to each other and cheating on each other and telling each other things to benefit themselves. Which we're all guilty of at one time or another. At the same time, they're almost caricatures, they're these larger-than-life, colorful characters.

You play this consummate bad boy in the film. It seemed you had to strike a balance between him being a caricature and him being a real person.

Yeah, absolutely. I had to have the confidence in Stephen to really guide that and judge it, but also allow me to be as ridiculous as I could. I've met people like that, people who are so full of themselves and so involved in their own world. I loved it. It was very exciting, playing him. I didn't take it too seriously, but I also didn't want him to be hated. He's a bad boy and he's just so wonderfully stupid and ignorant toward everything that you have some sort of sympathy toward him, actually.

A friend of mine who is English said that she saw Ben as an ordinary Cockney kid who had this fame land on him, whatever combination of accident and talent that was. Is that how you saw him?

Kind of. I also saw him as someone who was putting on a different face, like everyone in this film. They're lying about who they are, or hiding behind a mask. I saw him as a bit of a "Mockney" who probably came from quite a nice background, a Mummy's boy with a piano and a drum kit. He's so vain that he's developed an image for himself that he likes.

Your director was of course Stephen Frears, and he's a pretty big name in the history of British cinema, at this point. Was it a major thing for you to work with Stephen?

It was wonderful. My first experience of meeting him was when I walked into the room for a part I was desperate to do. Literally, as I walked in the room, he was like, "No! No! Completely wrong. Get out." And I was like, "Excuse me, I've come all this way I just want to meet you." And he said, "No, no, you're wrong. Your hair's all short. This character needs long hair." So I started arguing with him: "I can have long hair! I can have any kind of hair you want." And he went, "No, you're completely wrong." And then he said, "Dominic, one last chance. Do you have a cigarette?" I didn't know what to do, I was terrified. I said, "No, but I can get you some."

It was so pathetic. And he fantastically remembered that experience and had me back. But I think that says a lot about who he is. He knows exactly what he wants and he doesn't waste any time. He doesn't suffer fools, and I think it was a perfectly good reason. I wasn't right for it, and he didn't want to waste half an hour of his life having a chat about nothing. And he didn't want me to waste half an hour of my life chatting about nothing.

Actually, making the film was similar. He knew exactly the whole picture and the whole editing process. Every shot was necessary, and there's not a great deal that was shot that wasn't in the final cut. That's really rare, and it makes you feel like you're in such safe hands. He's just a great guy. You feel very comfortable with him. He says the most extraordinary things, too, while you're acting. Things that make no sense whatsoever. "You're giving me too much Northern Line, I need more Central Line." What?

Did you figure out what that meant?

No, but it kind of has an effect. It sinks in somewhere. And something then happens, it changes how you do the performance after that. It's quite exciting. You have no idea really what it means, but it does something. And he's definitely what they call an actor's director. That's his first care, and he'll always discuss things with you and always make sure that you are happy.

This was a somewhat different experience from doing Racine's "Phèdre" onstage in London, I suppose?

Yes, it was, very much. Though I must say that my only other experience that felt like doing rock 'n' roll was doing "Phèdre" at the Davros in Greece in front of 40,000 people. That was the last rock-star feeling I had. But no, it's very different.

Before we go, can you talk about playing Uday Hussein and his double in an upcoming film?

I've finished it already. It's by Lee Tamahori who made "Once Were Warriors," and I play the son who was a terrible maniac. A terrible, terrible, terrible, man. I play him and he forced someone -- someone he knew from school who looked almost identical to him -- to be his body double. This is all true. This guy was forced to do it, otherwise Uday said he would kill his entire family. He became part of a regime that he didn't want to be part of, and experienced the horrors of that regime firsthand.