Better engineering, training could help prevent runway overruns, such as the one this weekend that killed 158 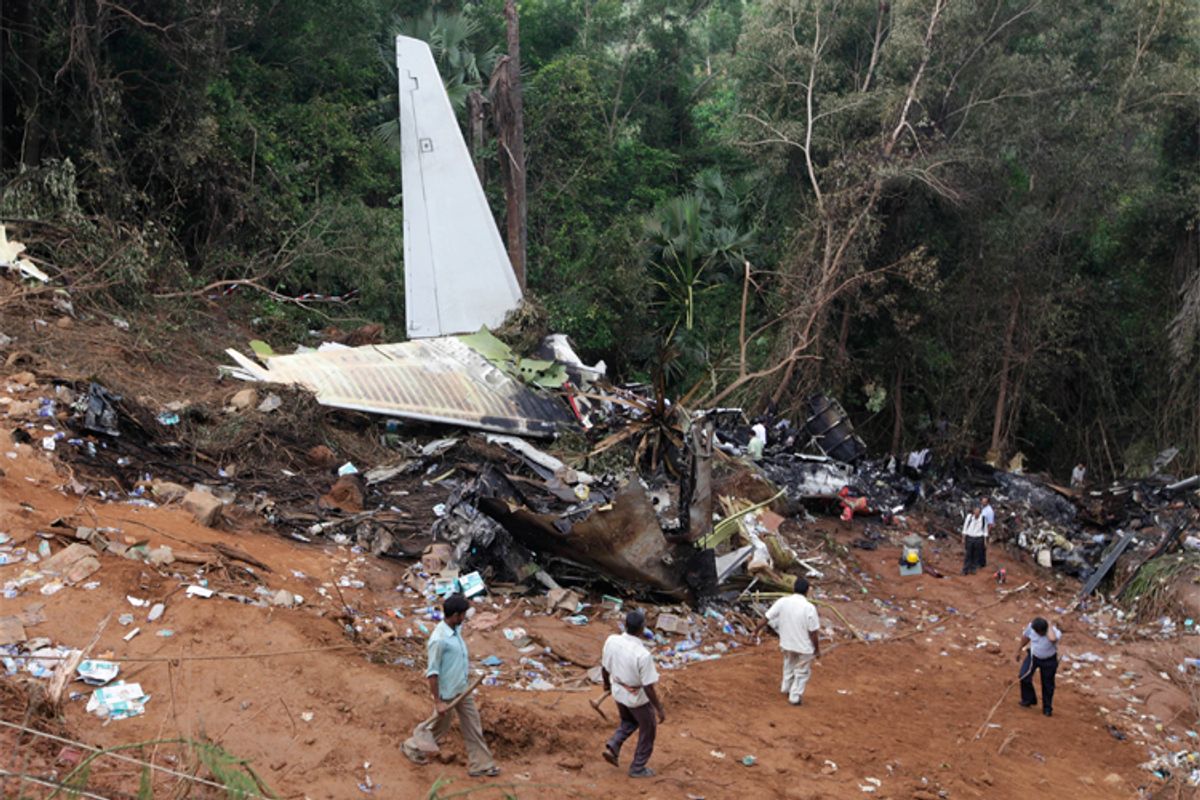 Forensic officials and rescue workers inspect the wreckage of a crashed Air India Express passenger plane in Mangalore on May 23.
--

On May 12, an Airbus A330 crashed in Libya killing 103 passengers and crew; this past weekend, an Air India Express 737 overran a runway while attempting to land in the southern Indian city of Mangalore, killing 158. Not to cast a jinx, but plane crashes, like celebrity deaths and tropical storms, seem to happen in threes, so I'll be eyeing the news nervously in the days ahead.

Two large-scale crashes in under two weeks is most likely just a coincidence, but it's also true that the overall number of accidents, globally, is on the rise. There are two ways of looking at this. The first way is to remember that the number of commercial jetliners worldwide has more than doubled in the past quarter-century, carrying more than double the number of travelers. Although accident totals might be going up, accident rates -- i.e., fatalities per miles flown -- have been steadily falling. Despite any uptick in the raw number of crashes, we are much safer than we used to be, both in America and abroad.

On the other hand, some experts worry that we're approaching a tipping point. They cite, among other problems, regulatory foot-dragging, substandard hiring and training standards, and a general attitude of complacency. How any of this may have factored into the disasters in Libya and India remains to be seen.

The Mangalore incident highlights a particular and growingly common kind of accident: the runway overrun. A plane is landing -- or taking off -- in what seem to be manageable conditions, yet for one reason or another it careens off the runway and crashes. We've seen this several times in the past few years -- in Toronto, in Sao Paulo, in Chicago, in Lexington, Ky. This, too, can be looked at a couple of ways, one more positive than the other. On the bright side, we're seeing more runway accidents because, through vastly improved crew training and technology, we've all but eliminated most of the other kinds. What's left over are those causes that are the toughest to engineer away. There is a certain, inexorable precariousness of fate any time a jetliner is hurtling down a runway at 160 mph, and this will always be the most inherently dangerous portion of any flight.

Then again, in retrospect, a majority of these accidents turn out to have been easily avoidable, the fault of human error compounded by airport infrastructures (short runways, lack of stopway zones, etc.) that maybe aren't as top-notch as they could be. It could be we still have some work to do when it comes to that training and technology.

It's impossible to say what went wrong in Mangalore, but it's worth noting that the runway involved, while a relatively robust 8,000 feet long, ends abruptly at the edge of a steep gorge, into which Air India Express Flight 812 plummeted. That does not make the runway dangerous by any stretch -- 8,000 feet is plenty of room for a 737 under almost all conditions -- but it does make it less forgiving should some serious mistake be made.

Reportedly, for reasons not yet understood, Flight 812 attempted to take off again after having touched down, only to run out of room.

Landings are more scientific than most people realize. A pilot does not eyeball the runway and conclude "that looks about right," then hit the brakes and hope for the best. Taking weight, wind and weather into account -- including penalties for a surface slickened by ice, snow or rain -- data must show that a plane be able to stop within the available distance, plus a buffer margin. A flight will not be dispatched to an airport in the first place unless it has room enough to touch down and come to a complete stop within the first 60 percent of the intended runway’s total length.

That's textbook. If, however, the approach is too fast, too high or otherwise unstable, that guarantee no longer applies.

The best way -- indeed the right way -- of dealing with an unstable approach is to discontinue it. Normally this would be done well before the tires make contact with the runway. Although initiating the go-around maneuver after touching down is still very possible, it becomes very risky if a significant distance of pavement is already eaten up. The crew of Flight 812 may have found itself in a position where, having neglected to break off the landing when it was still perfectly safe to do so, suddenly there was neither room enough to accelerate to climb speed nor room enough to stop.

Early eyewitness reports spoke of one or more of the 737's tires having blown. This is unconfirmed and may have nothing whatsoever to do with the catastrophe, but it's interesting to talk about nonetheless.

Malfunctions or blowouts involving a plane's forward (nose) gear are by nature pretty innocuous. Those involving main-gear tires beneath the wings and fuselage are a little different, and can be dangerous. The most likely time for a tire failure is during or shortly after any sort of high-speed braking event -- such as a takeoff abort or an attempted sudden stop after landing. The brakes generate tremendous amounts of energy and heat, some of which is transferred to the tires themselves. Although airplane tires are filled with inert nitrogen and affixed with fuse plugs that cause them to automatically deflate, rather than burst, once hitting a certain temperature, failure of a main-gear tire at high runway speed can still induce all sorts of unpleasantness, from reduced braking capabilities to the chance of fire. Making things worse is the possibility of a single failed tire propagating the failure of those around it.

In 1986 a Mexicana 727 went down after takeoff from Mexico City killing 167 people. An overheated brake caused one of the plane's four main tires to burst, with shrapnel severing fuel, hydraulic and electrical lines. The tire had been erroneously serviced with air instead of nitrogen. Inflation pressure, too, is important; at high speeds an underinflated tire can generate intense temperatures. In 1991 a Canadian-registered DC-8 crashed in Saudi Arabia killing 261 people. A single, underinflated tire transferred energy to a second tire, and both came apart during takeoff. Bits of material then began to burn after gear retraction. Fire spread through the cabin as the plane circled back for an emergency landing, with seats and their occupants ejected through the fuselage. And last but not least, the fiery crash of an Air France Concorde in 2000 was linked to a fuel tank puncture brought on by a burst tire.

Such occurrences are rare, of course, and modern airliners are protected with highly sophisticated anti-skid systems, brake temperature readouts in their cockpits, and wheel-well fire suppression systems in the gear bays.

Notice I say "modern." Those catastrophes listed above involved models that are now obsolete. One of them was a DC-8, a plane that I'm all too familiar with, having flown a freighter version for the better part of four years.

Late one night in 1998 we were prepping for takeoff out of Brussels, Belgium, at our highest allowable taxi tonnage when the ground controllers gave us a long, circuitous route to the runway. Rolling along the apron in predawn darkness, we suddenly heard a bang and felt a shudder. A small pothole, we concluded, and kept going, as otherwise the aircraft felt normal. Just as we turned onto the runway and were cleared for takeoff, we heard a second bang, followed rapidly by a third, and then a fourth. And with that, the airplane -- all 355,000 pounds of it -- seized and wouldn't move.

The first noise we'd heard was one of the DC-8's eight main tires giving up the ghost. At max weight and after several sharp turns along the taxiways, it was only a matter of time before the adjacent one met a similar fate. With two gone, stress on the remaining two sent them popping as well. We were lucky things happened when they did, and not near takeoff speed with the threshold lights fast approaching. The runway was closed for seven hours until the crippled plane could be unloaded, defueled and towed away for repairs.