How to make tortillas the Zapotec way

They're sacred in Oaxaca -- and now you'll see why. Plus: Recipe for black bean "enchiladas" 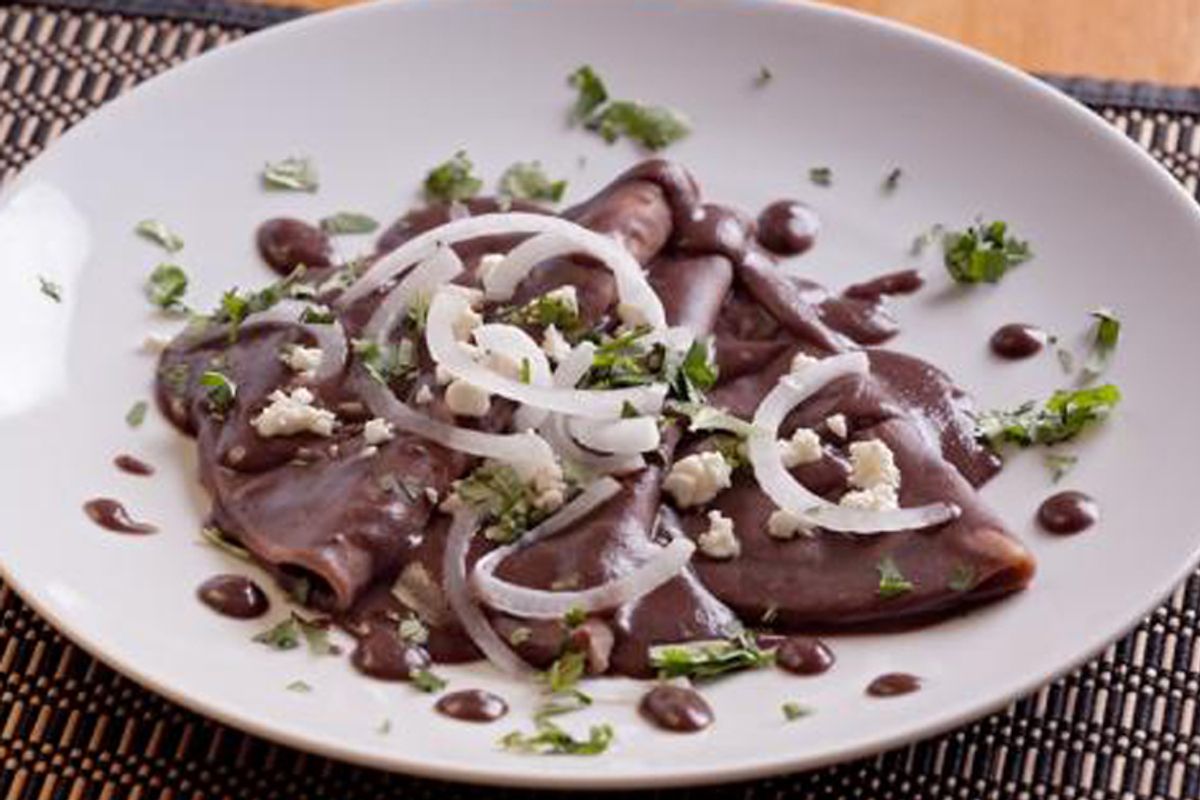 Tortillas are sacred in the Zapotec village of San Lucas Quiaviní, Oaxaca. Devotees worship them by ripping them into little pieces and dunking them into soups, slathering them with spicy stews and sauces, wrapping them around little pieces of grilled meat, or otherwise laying waste to them in any number of thrifty and freakishly delicious ways, each field-tested and perfected by centuries of experimentation and practice.

The hellishly complicated Zapotec language spoken in San Lucas also venerates tortillas. The language has, among other things, a pronoun system that distinguishes referents according to the speaker's respect for them: animals and children are referred to with one set of pronouns; close friends and family with another. At the top of the linguistic pecking order are the reverential pronouns, used only to refer to God, saints, and a small number of culturally salient elements, such as the sun and moon -- and tortillas.

The presence of tortillas in the Zapotec pantheon finally made sense to me once I visited San Lucas to investigate that language: Tortillas appeared at every meal, without fail. Whenever I tried to get a Zapotec translation for a sentence such as "I already ate," what I invariably got back was "I already ate tortillas." The term for taking communion in the Catholic church translates literally as "eat the holy tortilla." If the dozens of missionaries trolling rural Oaxaca for lost souls had any sense at all, they'd translate the middle of the Lord's Prayer as "give us this day our daily tortilla."

And those tortillas are worthy of adoration. The most common variety in the village are big, thin corn tortillas -- about a foot across -- often faintly dusted with the ashes of the open fires over which they were cooked. I thought that I'd get tired of eating them three times a day over the two- or three-week duration of my trips down there, but I never did.

Over the course of several trips to San Lucas, I slowly figured out how to make those amazing tortillas. For reasons soon to become clear, I've never tried to make them this way myself -- and I hope I never have to.

Preparation time: about a year

Equipment needed: a grinding stone (metate) and a stone hand roller (mano), a fireproof flat skillet (comal), at least one adult male relative, one donkey, and at least two children or female relatives

Interestingly, expat San Lucas natives now living in the States tell me that not all tortillas can be referred to with reverential pronouns. This privilege is reserved for homemade tortillas back home: anything store-bought (or, God forbid, that comes in a re-sealable bag with NO TRANS-FATS! printed on it) is referred to with a socially neutral third-person pronoun, if spoken of at all.

If you've tried to work through the recipe above, you won't need to wonder why.

And here is my shortcut-filled take on a classically thrifty Oaxacan way to make tortillas the center of a hearty breakfast or simple supper, napped in a rich, savory sauce made from seasoned and pureed black beans. The sauce has startling blackish hue, but set aside any visions of the Deepwater Horizon: instead, think of that striking color as either evocatively earthy and primitive, or cutting-edge elegant. Either way, you'll have a stunning-looking plate, even if you must use unholy tortillas from the supermarket.

½ tsp. dried epazote, crumbled (Epazote is a Mexican herb that is almost inseparable from black beans in Oaxacan cooking, and well worth procuring)