He's keeping out of sight, where a purist libertarian can win. But he can't stay there forever 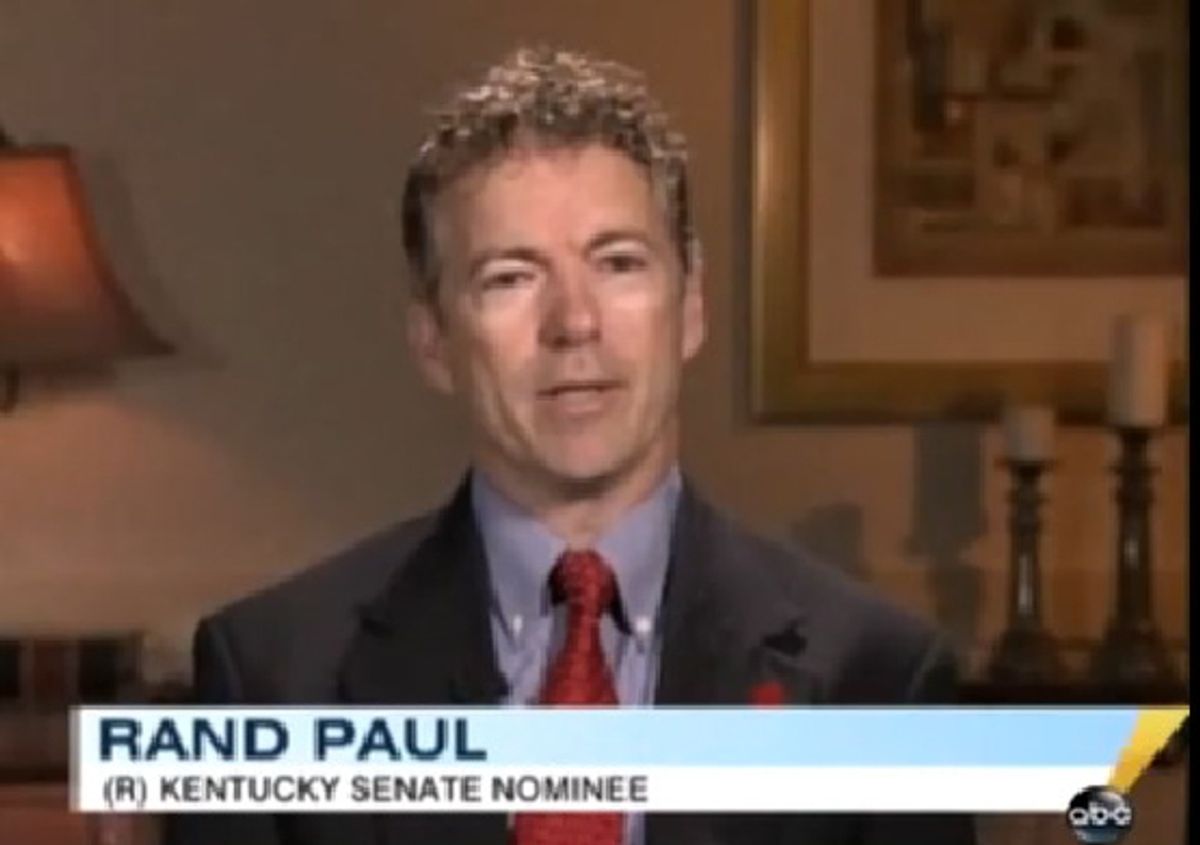 Last Friday, Kentucky Senate candidate Rand Paul went on ABC's "Good Morning, America," and the first words out of his mouth after saying hello were, "When does my honeymoon start? I had a big victory."

It must be thrilling for a political novice like Paul to win such a resounding victory in a Republican primary while maintaining his posture of ideological purity. The guy is clearly not prepared, however, for bridging the difference between a primary and a general election. Talking to George Stephanopoulos on Friday, he complained, "For an entire 24 hours, I’ve suffered from them saying, 'Oh, he wants to repeal the Civil Rights Act.' But that's never been my position." Stephanopoulos tried to clear through Paul’s frenzied deflection, to point out that Paul is obviously lying about his own clearly-stated beliefs. There comes an amazing moment at 1:40 of this video, where Stephanopoulos announces that he's going to read a letter to the editor Paul wrote in 2002, and Paul has to jump in and start filibustering. It's a rare sight: a candidate for federal office flailing to keep his own words off the air.

So the GOP nominee is now banking on people knowing as little about him and his opinions as possible. Paul is a candidate who believes himself to be a daring truth-teller, but refuses to answer substantive questions as "gotcha" attempts, or veers off on non-sequiturs to get away from straightforward interviewing. Obviously, this is a great day for democracy.

Paul's opposition to fairly bedrock pieces of American law, however, raises a whole host of other questions that he really ought to answer before he expects people to vote for him. If he's anything like consistent, it's hard to imagine that he believes in social security or Medicare, the minimum wage -- just to name a few. But how can we be sure? What will he admit to? In other words, he's exactly the kind of candidate who should be going on Meet the Press.

Which is why it's a damn shame that he canceled his appearance on yesterday’s "Meet the Press." A spokesman for the candidate explained on Friday, "Rand did 'Good Morning, America' today, set the record straight, and now we are done talking about it."

This is simply not something that Paul gets to decide. Talking about important issues is not a favor that a candidate does for the press. It's an obligation, and at this point, he's produced nothing better than a haze of misdirection. (And if I hear one more white Republican condescendingly reassure us that civil rights law is not an important issue, I'm going to blow my stack. Besides, Paul's stand on most major issues is now in doubt.) Representative democracy just can't work if candidates act like this.

Of course, it's pretty revealing that Paul had to start obfuscating his real views as soon as he became a general election candidate. What we're likely to see between now and November is the gradual transformation of the ideologically idiosyncratic Rand Paul into something much more like Trey Grayson, the generic Republican who lost the Republican primary last week.

Grayson is, well, pretty gray. There's a reason he didn't catch fire in the primary. But he would never have made Paul's rookie mistakes. This is not only because he's a seasoned politician. It's also because the Republican Party has mainly abandoned the orthodoxies of paleoconservative libertarianism that are unpalatable to the mainstream. Paul thought he could revive those tenets by pure force of will. He's been trying, essentially, to be a third-party candidate on a major-party ticket. Almost immediately, he's found out this doesn't work.

Ironically then, win or lose, the Paul campaign is likely to be yet another piece of evidence that the American people have little interest in old-fashioned libertarianism as a governing philosophy. Either Paul will try to stick to his guns and he'll lose or, more likely -- because he's already started doing this -- he'll abandon those beliefs that make him unusual (and unusually despicable).

What ducking out on "Meet the Press" means is that he’s already recognized this problem and, self-pityingly, doesn't want to face up to it. It's quite a bind: to get what he wants, Paul inevitably will have to betray his dearest, most backward-looking beliefs. Facing the enormity of this, he's holed up. He wants his honeymoon, in the magical place where he can be a purist, faithful to the creed, without also being an unelectable monster. But he can't stay in Candyland until November, not if the press does one-tenth of its job. When he comes back to reality, we'll be waiting to hear from him. Ultimately, he'll have to answer, and not just to the press. Paul has to meet the people of Kentucky