How to be wrong and offensive: Argue that the untamed Internet is inspiring "white flight" to Apple's walled garden 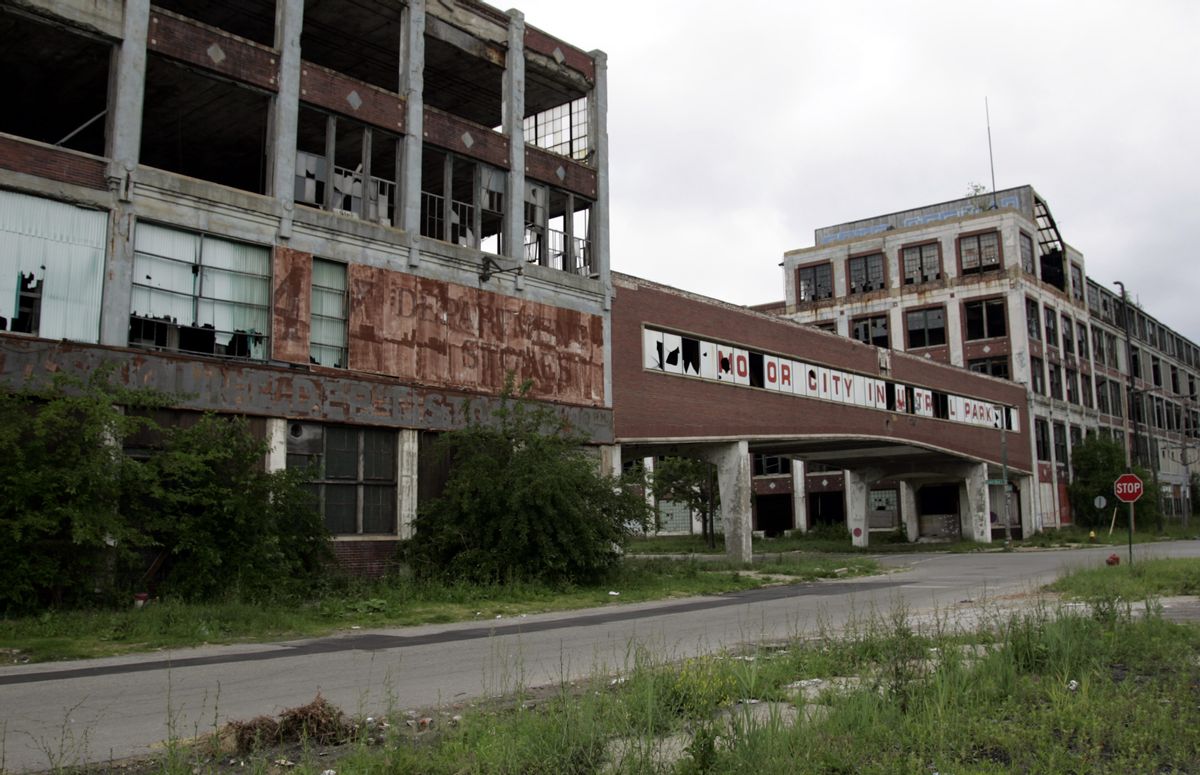 The abandoned and decaying Packard Motor Car Manufacturing plant, built in 1907 and designed by Albert Kahn, is seen near downtown Detroit, Michigan June 21, 2009. As communities from Buffalo to Milwaukee struggle with shuttered factories and vacant neighborhoods, some have turned abandoned properties into parks, gardens and other open space, even going so far as to plow under entire neighborhoods. In Flint, Michigan, the birthplace of General Motors, a pioneering program that allows local government to capture profits from tax foreclosures has generated funds to demolish over 1,000 abandoned homes in the past five years. Picture taken June 21. REUTERS/Rebecca Cook (UNITED STATES TRANSPORT BUSINESS EMPLOYMENT) (Reuters)
--

The fastest way to understanding the black hole of stupidity that relentlessly sucks all sense and meaning from Virginia Heffernan's New York Times Sunday Magazine thumb-sucker, "The Death of the Open Web," is to imagine what might happen to your iPhone if the open Web actually did die.

Suddenly, you would be the owner of a stylish brick that you could occasionally use to make phone calls with unsatisfying sound clarity. All the whiz-bang apps in the world would not save your beautiful gadget from the trash heap. Yes, the iPhone is snazzy, and yes, it offers a manicured online experience, but the must-have utility of the device is that it gives you access to the open Web -- whether that be Google, or the social network of your choice, or YouTube or Amazon or eBay or the movie listings in your city or your e-mail or your favorite blogger or quirkiest webcam or whatever --  without chaining you to a laptop or a desktop. Whether directly through a browser or as intermediated by an app, the appeal of the smartphone is that it delivers connectivity to the ever-expanding Internet universe. That is indeed the whole point: Access to everything.

Ostentatiously supporting her thesis with neither facts nor data, Heffernan posits that the iPhone and iPad are encouraging an analogue to the "white flight" that devastated U.S. cities in the '60s and '70s.

The Web is a teeming commercial city. It's haphazardly planned. Its public spaces are mobbed, and signs of urban decay abound in broken links and abandoned projects. Malware and spam have turned living conditions in many quarters unsafe and unsanitary. Bullies and hucksters roam the streets. An entrenched population of rowdy, polyglot rabble seems to dominate major sites.

People who find the Web distasteful -- ugly, uncivilized -- have nonetheless been forced to live there: it's the place to go for jobs, resources, services, social life, the future. But now, with the purchase of an iPhone or an iPad, there's a way out, an orderly suburb that lets you sample the Web's opportunities without having to mix with the riffraff. This suburb is defined by apps from the glittering App Store: neat, cute homes far from the Web city center, out in pristine Applecrest Estates. In the migration of dissenters from the "open" Web to pricey and secluded apps, we're witnessing urban decentralization, suburbanization and the online equivalent of white flight.

Polyglot rabble! Oh my! I guess that means that the meanies can call you bad names in more than one language. I suspect more than a little bit of projection is at work here. Heffernan sounds like someone who has read one too many nasty comments posted on her own online work and decided to declare jihad against the barbarians in response. But her thesis isn't just wrong, it's deeply offensive. To invoke the term "white flight" without considering the role of white racism in precipitating the decline of American cities is inexcusable and manages to completely confuse the historical sequence of events. White flight contributed to urban decay by, among other things, decimating urban tax bases and eviscerating downtown commercial sectors.

The correctly applied metaphor would be to suggest that the iPhone has ruined the Internet by luring the affluent upper white middle class away from the "open Web," leaving nothing behind but the darkly pigmented mob. And it would still be wrong.

But there's an even deeper problem with Heffernan's thesis than just the unthinking choice of a racially embedded metaphor to discuss online user behavior. Namely: Where is the evidence that the "open Web" is withering away in the first place? Heffernan states:

The far more significant development, however, is that many people are on their way to quitting the open Web entirely.

Says who? Again, Heffernan cites no data in support of this assertion. Last October, YouTube was streaming 1 billion videos a day. One week ago, that number was up to 2 billion. Is that a sign of people abandoning the open Web, or is it proof of an almost unthinkably fast surge in the number of people watching free online video, via whatever device? For most of this year (until recent privacy concerns ballooned) Facebook was adding 20-25 million new users a month. One could argue, I suppose, that Facebook itself is a suburban escape vent from the open Web, but I can guarantee you that if Facebook attempted to wall itself off from the barbarians by charging for access it would immediately go into rapid, terminal decline.

Heffernan is correct to note that Steve Jobs has found a clever way to make money via the iPhone's walled-off AppStore. Good for him. But the end of that story -- as suggested by the skyrocketing growth rates of Android phones -- has hardly been written. The open Web tends to find ways around walled gardens. And the computing devices that give us the most choices tend to be the long-term winners. Openness conquers all.

The open Web is unruly, and it can be nasty and brutish. But it is also teeming with life and energy and passion. Not only is it not dying, but it looks impossible to kill.