The absence of debate over war

With combat as the normalized American condition of both parties, it's unsurprising that debates have disappeared 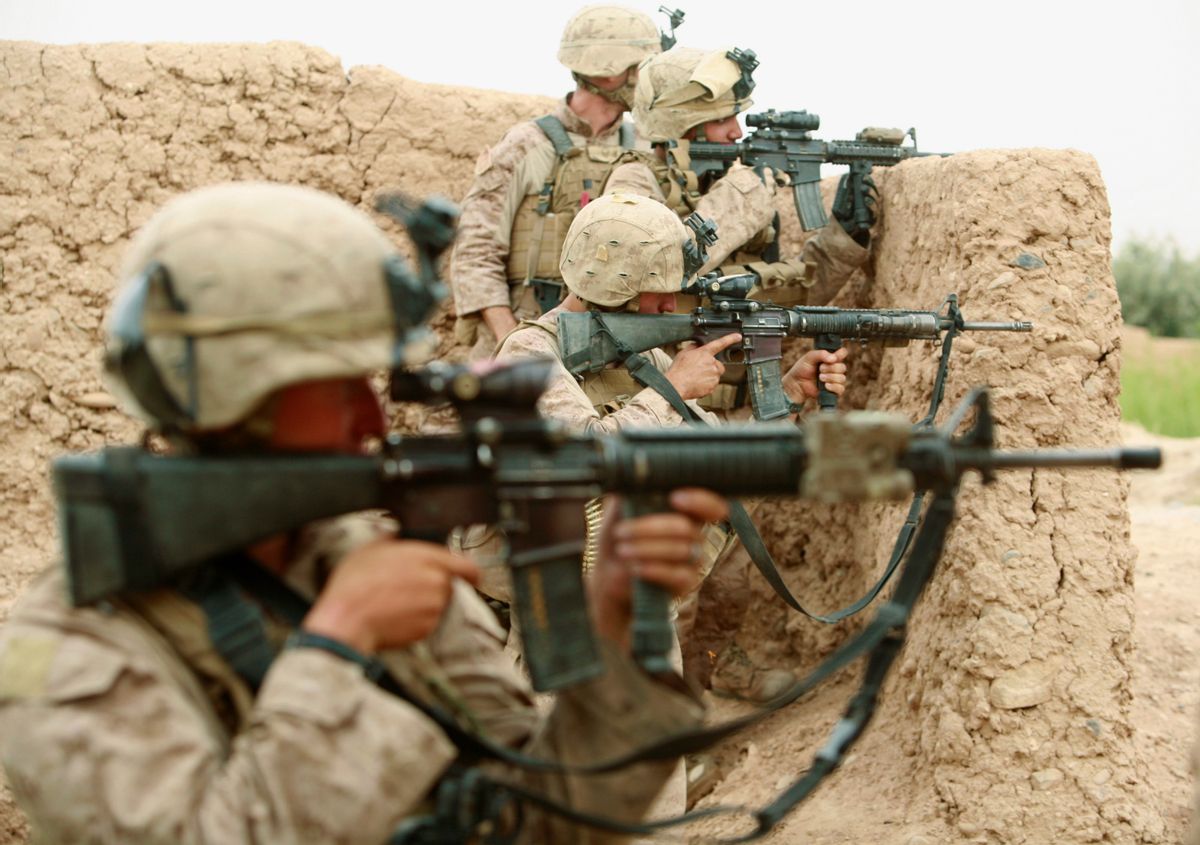 The Washington Post's Fred Hiatt ponders how little attention our various wars received during the primary campaigns that were just conducted:  "You would hardly know, from following this year's election campaign or the extensive coverage of last week's primaries, that America is at war. . . . those wars, and the wisdom of committing to or withdrawing from them, have hardly been mentioned in the hard-fought campaigns of the spring."  Hiatt is right in that observation, and it's worth examining the reasons for this.

One significant cause of America's indifference to the wars we are waging is that those wars have virtually no effect on the overwhelming majority of Americans (at least no recognized effect), while they impose a huge cost on a tiny sliver of the population:  those who fight the wars and their families.  Hiatt acknowledges that fact:  "it's yet another reminder of American society's separation from its professional military."  If anyone would know about that, it's the endless-war-loving, nowhere-near-a-battlefield Fred Hiatt.

Everyone from the Founders to George Orwell thought (and hoped) that the massive societal costs which wars impose would be a deterrent to their being fought, but, given the types of wars the U.S. chooses to wage, most Americans who express their "support" for them bear absolutely no perceived cost whatsoever.  Worse, many who cheer for our wars enjoy that most intoxicating and distorting reward:  cost-free benefits, in the form of vicarious feelings of strength, purpose, nobility and the like, all from a safe distance.  It's very difficult to generate attention for political issues that Americans fail to perceive so directly and tangibly affect them -- that's why the failing economy receives so much attention and our various wars (and civil liberties erosions) do not.

Then there's the lack of partisan division over these wars.  During the Bush presidency, war debates raged because those wars -- especially the Iraq war -- were a GOP liability and a Democratic Party asset.  Anger over the Iraq War drove the Democratic takeover of Congress in 2006 and Obama's election in 2008 (though it did not drive the end of the war).  But now, America's wars are no longer Republican wars; they're Democratic wars as well.  Both parties are thus vested in their defense, which guts any real debate or opposition.  Very few Republicans are going to speak ill of wars which their party started and continued for years, and very few Democrats are going to malign wars which their President is now prosecuting.

Here we find, once again, one of the most consequential aspects of the Obama presidency thus far:  the conversion of numerous Bush/Cheney policies from what they once were (controversial, divisive, right-wing extremism) into what they have become (uncontroversial bipartisan consensus).  One sees this dynamic most clearly in the Terrorism/civil-liberties realm, but it is quite glaring in the realm of war as well.  Hiatt describes it this way:

[M]aybe, in a time of toxic partisanship, we should be grateful for this inattention to the wars, taking the absence of debate as a sign of rare bipartisan consensus. Certainly few would miss the vitriol of the Iraq debate of a few years back.

It's not surprising that Hiatt is grateful for the disappearance of what he calls "the vitriol of the Iraq debate a few years back."  As one of the media's leading cheerleaders for the invasion and ongoing occupation, it's understandable that he wants no longer to be reminded of the enormous amounts of innocent blood which he and his war-cheering comrades have on their permanently drenched hands.  But he is nonetheless right to take "the absence of debate" as a "sign of rare bipartisan consensus"  (though such consensus is hardly "rare").  It's true that the (dubious) perception that the Iraq War will soon end has probably dampened the urgency of that issue in the eyes of many people, as have the pretty words that Obama utters when he speaks of war, but the real reason the "debates" have disappeared is because it serves neither party to engage them.

But the most significant factor in understanding this lack of debate is the fact that "war" is not some aberrational, temporary state of affairs for the country.  It's the opposite.  Thanks to Fred Hiatt and his friends, war is basically the permanent American condition:  war is who we are and what we do as a nation.  We're essentially a war fighting state.  We have been at "war" the entire last decade (as well as largley non-stop for the decades which preceded it), and continue now to be at "war" with no end in sight.  That's clearly true of our specific wars (in Afghanistan).  And, worse, the way in which The War, more broadly, has been defined (i.e., against Islamic extremism/those who wish to harm Americans) makes it highly likely that it will never end in our lifetime.  The decree that we are "at war" has been repeated over and over for a full decade, drumbed into our heads from all directions without pause, sanctified as one of those Bipartisan Orthodoxies that nobody can dispute upon pain of having one's Seriousness credentials immediately and irrevocably revoked.  With war this normalized, is it really surprising that nobody debates it any longer?  It'd be like debating the color of the sky.

That's why I always find the War Excuse for anything the Government does so baffling and nonsensical.  Any objections one voices to what the Executive Branch does -- indefinite detentions, presidential assassinations of citizens, extreme secrecy, etc. -- will be met with the justification that such actions are permissible "during wartime," as though "wartime" is some special, temporary, fleeting state of affairs which necessitates vesting powers in the government which, during "normal" times, would be impermissible.

But the contrast between "war and "normal times" is totally illusory.  For the United States, war is normalcy.  The "war" we're fighting has been defined and designed to be virtually endless.  Political leaders from both parties have been explicit about that.  Here's how Obama put it last May in his "civil liberties" speech:

Now this generation faces a great test in the specter of terrorism. And unlike the Civil War or World War II, we can't count on a surrender ceremony to bring this journey to an end. Right now, in distant training camps and in crowded cities, there are people plotting to take American lives. That will be the case a year from now, five years from now, and -- in all probability -- 10 years from now.

All the way back in September, 2001, with the World Trade Center still smoldering, George Bush said basically the same thing:  "Now, this war will not be like the war against Iraq a decade ago, with a decisive liberation of territory and a swift conclusion. . . . Americans should not expect one battle, but a lengthy campaign unlike any other we have ever seen."  Thus:  to justify new and unaccountable powers based on the fact that we are "at war" is, in essence, to change the American political system permanently, because the "war," and the accompanying powers that it justifies, are not going anywhere for many, many years to come.

With both political parties affirming over and over that we are going to be at "war" for years, indeed decades, it's unsurprising that so few people are interested in debating "war."  That's true even for the limited question of Afghanistan, where most Republicans won't question a war their President began and most Democrats won't question a war their President has vigorously embraced as his own.  From the perspective of the permanent factions that rule Washington -- from Wall Street and AIPAC to the intelligence and military "communities" -- therein lies the beauty of the two-party system:  as long as both party establishments support a particular policy, any meaningful debate over it comes to a grinding halt.

UPDATE:  Just to underscore the point:  suppose that Obama announced that he did not intend to withdraw troops from Iraq and/or Afghanistan on schedule, or suppose that he decided that the U.S. should militarily confront/attack Iran ostensibly over its nuclear weapons program.  If any of that were to happen, how would most Democrats -- and the Party itself -- react now that there's a Democratic President?  Most Republicans would certainly support those policies, so where would the "debate" come from?  Isn't it fairly clear that to the extent "debate" existed at all, it would be confined to some small and relatively marginalized enclaves, while the mainstream of both parties supported those decisions?  I'm not predicting any of that will happen, only that if it did, there'd be the same lack of debate as Hiatt ponders today.