After debate on immigration and climate, the GOP says the meeting went badly; the White House says it was just fine 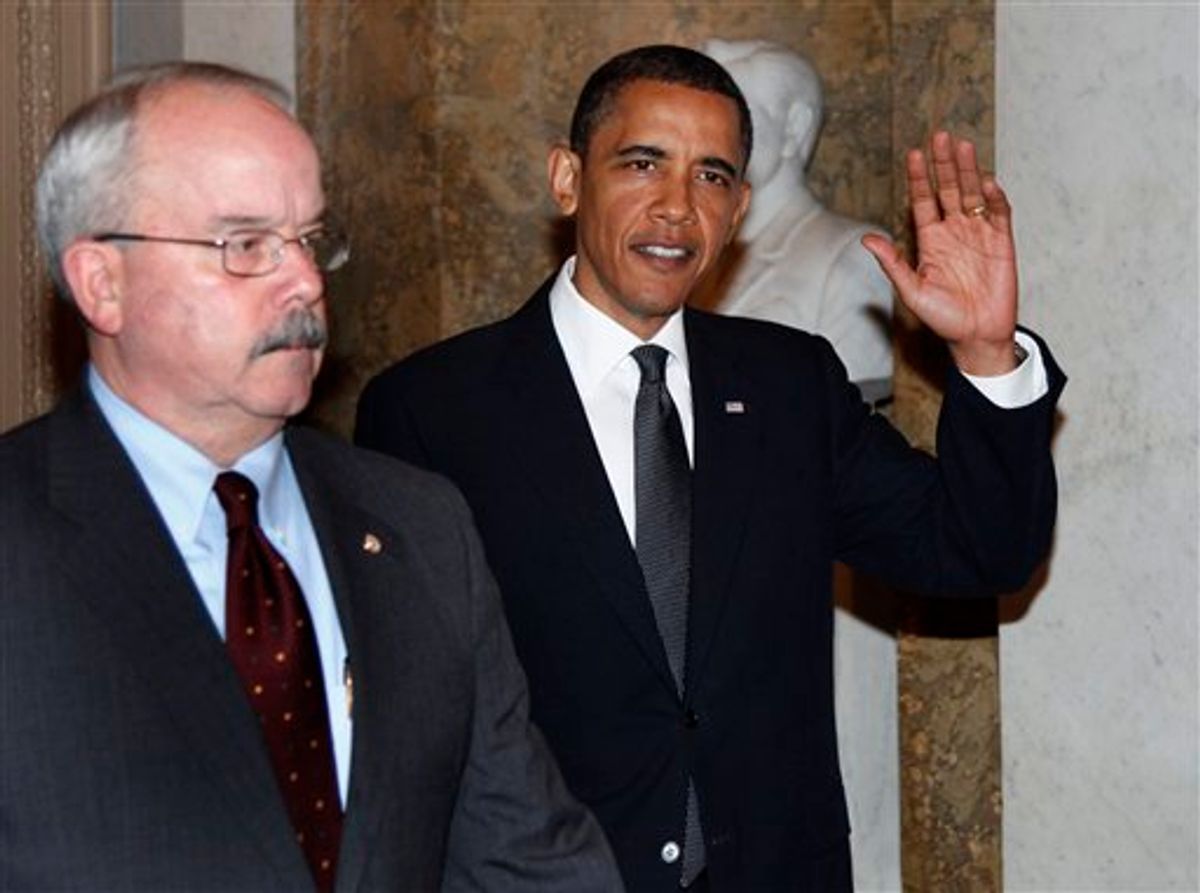 President Barack Obama, escorted by Senate Sergeant-at-Arms Terrance Gainer, waves as he arrives on Capitol Hill in Washington, Tuesday, May 25, 2010, to meet with Senate Republicans behind closed doors for talks ranging from jobs to the massive Gulf oil spill and prospects for strengthening border security this election year. (AP Photo/Carolyn Kaster) (AP)
--

Getting elected in a statewide campaign sometimes takes more political savvy than winning in a narrowly drawn district designed to put like-minded voters together and consolidate one party's base. Which may explain why, when Senate Republicans met with President Obama Tuesday, they didn't make the same mistake their House counterparts made in January and put the whole thing on TV.

But the end result of both get-togethers seemed to be about the same: Obama and the Republicans didn't find much they agreed on. (The main difference this time, of course, is that the president didn't get to humiliate his adversaries in public.) "It was a good exchange, a candid exchange on both sides," said GOP leader Mitch McConnell, R-Ky., after lunch. Translated out of the diplomatic niceties of institutional Senate-speak, that means they didn't get along so well; Kansas Sen. Pat Roberts described Obama as "thin-skinned" afterwards.

The lunch talk apparently started out well enough, with Obama asking Republicans to work with the White House on some issues for the good of the country. And then they got down to specifics, and everyone remembered that they each have very different definitions these days of "the good of the country." Obama pushed for immigration reform; Republicans said he needs to send soldiers to the U.S.-Mexico border. Obama asked for help on climate change legislation; Republicans think that's the vehicle for a massive, secret tax hike. There was some sort of back-and-forth between Obama and Sen. David Vitter, R-La., over the BP oil spill. (And some secrecy, too: Roberts, who took very careful notes that he read from when talking to reporters later, said Obama went off the record during some exchanges.) Immigration was the main point of contention, and the reason the White House gave for the meeting, but it seemed like everything turned into a bit of an argument.

Republicans were united after the lunch behind one simple message: they didn't really like what they heard. "It's always good to have the president come up and speak to our conference," said Sen. John Thune, R-S.D. "And certainly we had a lively discussion today. But I think what's really important is not so much the symbolism of bipartisanship as it is the action of bipartisanship." Sen. Scott Brown, R-Mass., who arrived in Washington earlier this year saying he wanted to work with Obama when possible, was a little less blunt: "He offered the opportunity, if we had some issues and theories where we think we can work together, we should let him know about it," Brown said. "So I appreciate his willingness to let us try to find that common ground." Then again, Brown's constituents in Massachusetts probably like Obama considerably more than Thune's in South Dakota do.

Things might have gone a little smoother, though, if Senate Republican leaders hadn't decided to make the caucus starve in the name of keeping the discussion lively. The lunch meeting didn't involve any lunch; the food wasn't served until Obama had left the Capitol, nearly an hour and a half after the session started. Senators are creatures of habit, and one of their habits is a regular Tuesday lunch with their colleagues. In fact, Republicans said Obama might have taken a few more questions, but the GOP decided the session had gone on long enough and sent him on his way. (Presumably so the food wouldn't get cold.)

The White House, for its part, claimed everything was perfectly friendly. It was "civil in tone," spokesman Bill Burton told reporters while flying to California for a fundraiser. The meeting was less contentious than the GOP was making it out to be, Burton says. Which may be the ultimate Obama attempt at conciliation -- he leaves a lunch with a bunch of people who immediately run to tell the press how much they squabbled with him, and his aides say nothing of the sort happened. Either way, don't expect the meeting to wind up leading to any great breakthroughs. Lunch or no lunch, it's an election year, after all.