A man's right to choose an abortion

How much say should a man have in the choice to become a parent? 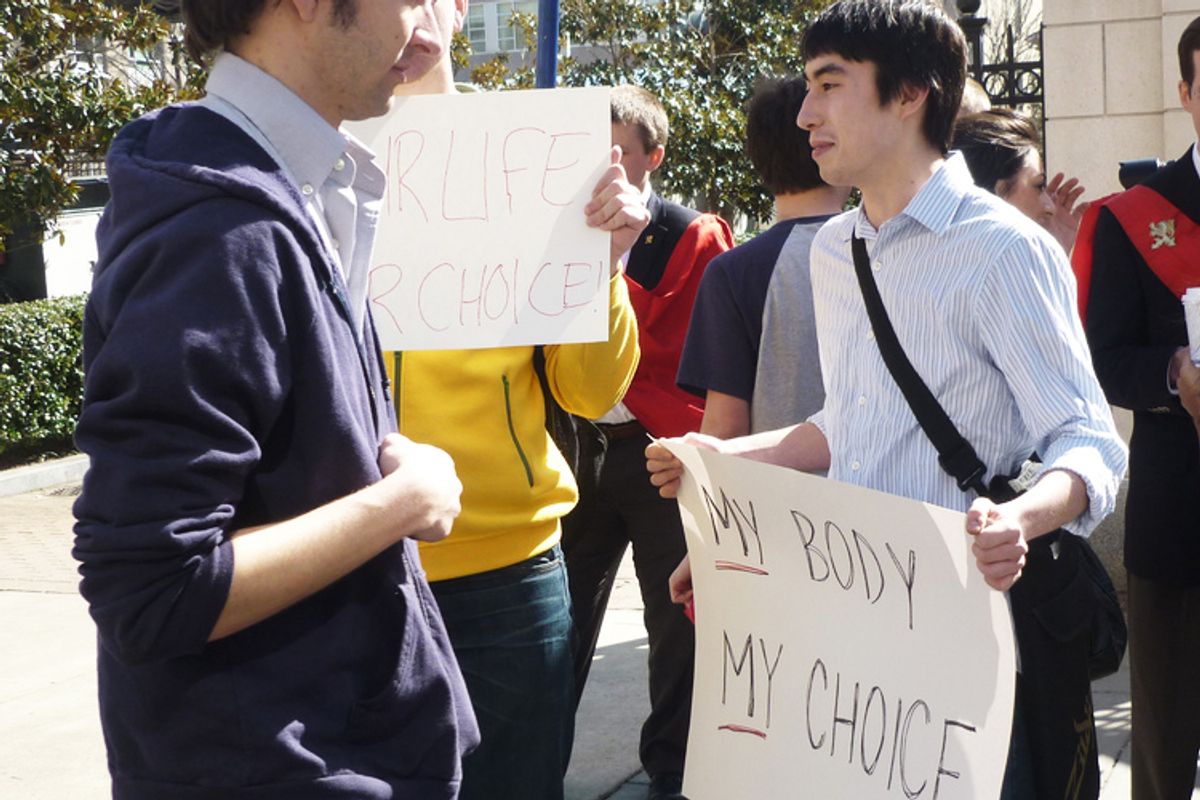 Pro-choice. Keep your laws off my body. Every child a wanted child. Does that apply to men, too?

In a complicated, fascinating and refreshingly balanced story for the June issue of Elle called "The Parent Trap," writer Stephanie Fairyington explores the case of Greg Bruell, a divorced, stay-at-home father of two who, when confronted with an unwanted pregnancy, just said no. Bruell and his girlfriend had already gone through one abortion when, just months later, she found herself pregnant again. He says they'd agreed ahead of time that if she conceived again, "she'd abort without waffling." Instead, she not only had the baby, she sued him for child support. What may have been a messy private situation for a man, a woman and a child soon became a golden opportunity for the National Center for Men, an advocacy group devoted to "assertively addressing all legitimate men's concerns."

The organization, which attained attention five years ago after it filed suit over a similar story, latched onto Bruell, a man whose track record as an attentive, supportive dad seemed to block any potential cries of deadbeatism. Its director, Mel Feit, argues persuasively in Elle that "reproductive choice isn't a fundamental right if it's only limited to people who have internal reproductive systems."

And yet, it's not that simple. There are plenty of paternity tests and child-support suits to go around, but the fact remains that choice for a man is still frequently as close as the nearest door. You can't argue, as Feit has, about the Equal Protection clause when only one party is getting pregnant and bearing the full physical load of abortion or childbirth. And considering that approximately 84 percent of children in single-parent families are being raised by mothers, it doesn’t look like there's an epidemic of reluctant fathers being dragged into the role of patriarch.

When it comes to reproduction, whatever fondness we may have for exact equivalents doesn't apply. But does that mean a man has no say whatsoever in who gets to carry around his DNA? Speaking to Salon.com Wednesday, Feit said, "She has to make the ultimate decision, but he has a moral right to input," adding that, "When a man and woman have discussed what they want and have an agreement, I do not think she has a right to impose her change of mind."

Well, does she? The story's writer, Stephanie Fairyington, told us Wednesday, "Men basically have no rights on this. I wanted to explore the irony of feminists making biological claims to justify denying men equal reproductive rights." So if we'd be outraged at the notion of a woman being forced to have an unwanted child, if we wouldn't stand for a moralizing, "You knew what you were getting into when you had sex," how do we respond when those arguments are applied to a man? If we would never hold a woman who put a baby up for adoption subsequently accountable to that offspring, what expectation should there be for a man who opts out? As Bruell says in the Elle story, "I don't want to be forced to take responsibility for something that I was deceived into becoming a part of.”

But that "something" Bruell refers to isn't just a failure of birth control. Pregnancies have a tendency to result in babies, who in turn become sentient humans, as Bruell, who is in fact now spending time with and supporting his baby daughter, would likely attest. (Mel Feit's response to the story's turn of events is that, "They're figuring things out, and that's inspiring.")

It is entirely possible to grow up with the knowledge that a parent couldn't or wouldn't provide financially and emotionally for you and still be a secure, amply loved and nurtured person. The planet is full of them. But surely there's also something a little crappy about having a father who viewed your existence simply as a trick or a breach of a deal. When my own father left and didn't look back when my mother was pregnant, it was both a blessing and a supreme act of selfishness. Life is rarely black or white, especially when it comes to family.

The world would likely be a far better place if people unprepared to have children acknowledged it and made clearly stated arrangements as early in the game as possible. Bad parenting, after all, has bankrolled far more shrink sessions than merely absent parenting could ever hope to underwrite. As a writer/producer and mother of one of the coolest girls on the planet, Marcelle Karp says, "If the biological father is in any way in the child's life, the mother has every right to go to family court and demand child support. But if he has 'left the building,' then honestly, he's doing the mother and the child a favor. No kid wants a fake dad around and no woman needs a man to flake on her kid." And in among the incredibly complex, deeply emotional rhetoric of rights and responsibilities, maybe the simplest and most ethical rule of thumb for both women and men is the motivation Stephanie Fairyington had in the first place: "It seems fundamentally unfair to impose a major life decision on someone who's made it clear they didn't want it."