There's a clear link between the BP spill and the global warming bill. Obama needs to explain it to Americans 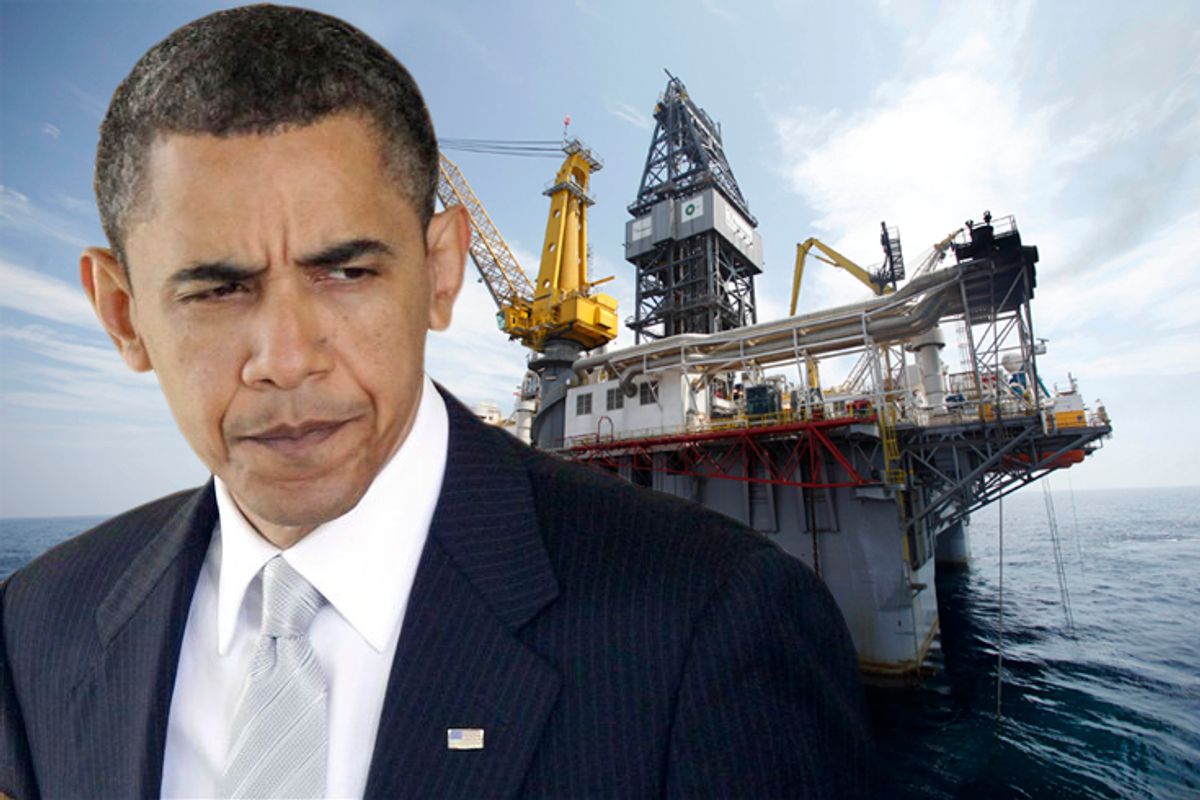 The Development Driller III, which is drilling the relief well, is seen at the site of the Deepwater Horizon oil spill in the Gulf of Mexico, off the coast of Louisiana, May 11, 2010. REUTERS/Gerald Herbert/Pool (UNITED STATES - Tags: DISASTER ENVIRONMENT ENERGY) (Â© Pool New / Reuters)
--

The truth is that there's not much more that President Obama can do to stop the eco-disaster now hitting the Gulf of Mexico. But his response to our fossil fuel-driven crises -- so far -- can still be deemed grossly inadequate.

That's because the Gulf spill is actually one of two environmental catastrophes now unfolding, and Obama doesn’t seem to understand how they are related.

The milder but more imminent of the two is the BP disaster. It's now clear that the Gulf Coast will be ravaged, that the impact will be felt for at least a generation, and that we will probably be testing seafood from the area for decades. If the Loop Current entrains a significant amount of the oil and dispersants to the Florida Keys, America's great coral reef might suffer irreparable damage.

Most of the blame rests with BP -- and with Big Oil's powerful supporters in Congress, who have created the voluntary, "trust us" self-regulation we now have. Some of the blame also resides with the Minerals Management Service, which became absurdly cozy with the industry under the Cheney-Bush administration.

Because BP and Big Oil deluded themselves (and everyone else) into believing that such a disaster was unthinkable, nobody was prepared for it. The Rube Goldberg contraptions that BP is slapping together now is proof of this. If a single major oil company had thought that any of BP's jury-rigged solutions made sense, they would have pre-built and prepositioned them a long time ago.

With its reckless cost- and corner-cutting and efforts to hide the magnitude of the gusher, BP has proven itself completely untrustworthy. As millions of gallons of oil and hundreds of thousand of gallons of dispersants cause their inevitable damage to sensitive coastal wetlands, fish, fowl and wildlife, frustration will boil over, a process that has already begun.

Unfortunately for Obama, Congress established the principle that the oil companies are responsible for dealing with major spills after the Exxon Valdez disaster two decades ago. The oil companies pay for the cleanup and the federal agencies oversee the process.

But even more unfortunate for Obama is that in spite of BP's incompetence, nobody really knows how to stop the mile-deep undersea volcano (other than drilling a relief well, which takes many weeks). And nobody knows how to clean it up. Independent experts calculate that BP may be spewing the equivalent of the Exxon Valdez disaster every few days. As Robert Brulle, a professor of Public Health at Drexel University and 20-year Coast Guard veteran, has noted, "With a spill of this magnitude and complexity, there is no such thing as an effective response."

Buried at the end of a piece on how Louisiana Gov. Bobby Jindal and others are criticizing the administration for various failings, the Washington Post has this quote from Byron W. King, an energy analyst: "But really, Uncle Sam has almost no institutional ability to control the oil spill. For that, you need people with technical authority, technical skill and firms with industrial capabilities."

As of Monday, the Coast Guard, which is overseeing BP's cleanup efforts, has no plans to take over. Adm.Thad Allen said, "To push BP out of the way would raise the question: to replace them with what? They’re exhausting every technical means possible to deal with that leak."

On Monday, Sen. Bill Nelson, D-Fla., issued a seemingly compelling call that others have made: "The military ought to take charge. The military can organize it and be the head of the rescue operation. Otherwise we have a situation that's going out of control." But the Navy is already providing technical assistance in plugging the leak and the Coast Guard is coordinating and overseeing the cleanup effort by BP. Even Nelson couldn't explain how the military was better positioned to deal with the disaster.

If I were Obama, I'd put Jindal in charge of the Louisiana response. In the unlikely event Jindal can accomplish much, everybody wins. In the likely event he can't, well ...

Obama's problem is that the situation is virtually uncontrollable. And this is characteristic of big environmental disasters -- particularly so with the biggest catastrophe that is now unfolding: human-caused global warming. Indeed, the impact of unrestricted emissions of greenhouse gases -- from sea level rise to desertification to ocean acidification -- will likely be irreversible for centuries.

And that's why Obama's legacy -- and indeed the legacy of all 21st century presidents, starting with George W. Bush -- will be determined primarily by whether we avert catastrophic climate change. If not, then Obama -- and all of us -- will be seen as a failure, and rightfully so.

There would be no other way to judge all of us if we (and the rest of the world) stay on our current greenhouse gas emissions path, which risks warming most of the inland United States by nine degrees or more by century’s end and which could lead to sea levels 3 to 6 feet higher (rising perhaps an inch or two a year), cause the Southwest -- from Kansas to California -- to become a permanent dust bowl, and transform much of the ocean into a hot, acidic dead zone. All of this would make the BP oil disaster fade into distant memory.

By the end of the third decade of this century, all of American life -- politics, international relations, our homes, our jobs, our industries, the kind of cars we drive -- will be forever transformed by the climate and energy challenge.

Obama is the first president in history to articulate in stark terms both the why and how of the sustainable clean energy vision. Last April, he said, "The choice we face is not between saving our environment and saving our economy. The choice we face is between prosperity and decline." In October, he said at MIT, "There are those who will suggest that moving toward clean energy will destroy our economy -- when it's the system we currently have that endangers our prosperity and prevents us from creating millions of new jobs."

But while Obama is a great speechmaker, he is not yet a great communicator -- like, say, Ronald Reagan or Winston Churchill. He lacks Reagan's overarching, consistent ideology and he lacks Churchill's laser focus on the imminent threat and the consequences of inaction.

Obama needs to take charge of the spill response, yes. But more important, he needs to communicate to Americans that the disaster was ultimately caused by our addiction to fossil fuel -- and to make it clear that we face a far greater disaster if we don't start working toward ending that addiction. In short, it's time to move away from the dirty, unsafe fuels of the 19th century and to embrace the clean safe fuels of the 21st century that never run out.

He needs to devote himself to passing comprehensive climate and clean energy legislation this year, the best chance he'll have during his presidency to do so -- and thus to preserve the health and well-being of future generations of Americans (not to mention his legacy). And this means more than just saying all the right things. What Obama must do is lead the Senate to a solution that many are too fearful to devise themselves.