The Sestak affair: High crime or politics as usual? 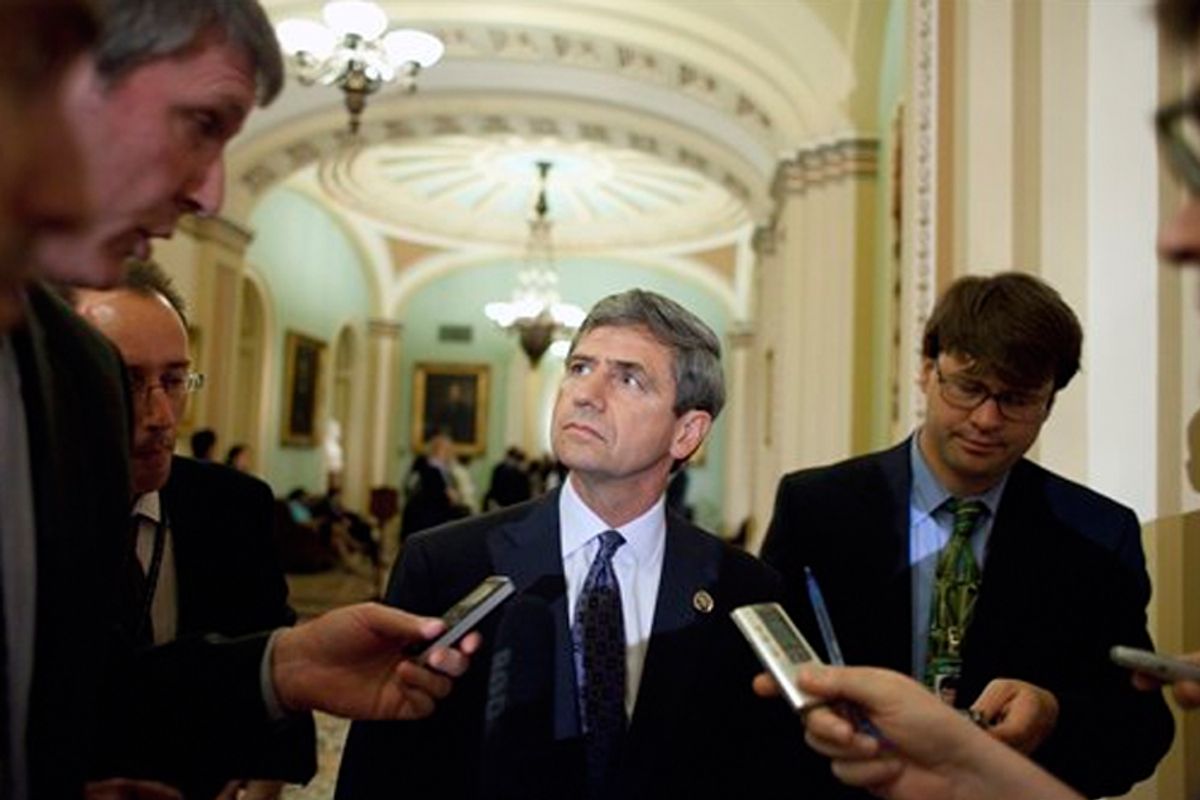 With Dick Morris proclaiming that the "Sestak job-offer scandal" may lead to the impeachment of Barack Obama, it is probably safe to assume that there isn't much of a scandal here at all, if only because Morris is so reliably and consistently wrong about almost everything. Nevertheless, Rep. Joe Sestak, D-Pa., has created real consternation by repeatedly stating that someone in the Obama White House offered him a job if he would drop out of the U.S. Senate primary that he won last week -- and now by refusing to name that official or elaborate on their conversation.

If a White House official offered such a deal to Sestak, was that a crime? Morris is not alone in suggesting that it was. Sean Hannity is equally convinced, and Patrick Buchanan seems persuaded as well. Karl Rove has pointed to three specific felony statutes that any such offer would have violated in his opinion. A columnist at Human Events even excitedly predicts that White House chief of staff Rahm Emanuel will be headed for prison in an "October surprise." Jonah Goldberg was skeptical at first, but he got in line too.

Frankly, it seemed to me -- when asked about this topic on MSNBC’s "Morning Joe" last Monday -- that offering a federal position in exchange for a political action might indeed constitute a criminal offense. (Unlike most of what I say or write, by the way, this remark instantly led to an approving quotation by one or two of the dozens of right-wing pundits promoting this story.)

But the available facts are far too sketchy to draw any firm conclusions, which is why the Washington and White House press corps has been asking detailed questions. So far they have gotten few answers. Both White House spokesman Robert Gibbs and presidential advisor David Axelrod seem to have confirmed that a conversation with Sestak occurred, although they say that White House lawyers have determined that nothing improper was said. Sestak is sticking to his story and saying nothing else, despite growing demands from the press and from Republicans, including his opponent Pat Toomey, that he disclose more.

Whatever Morris, Buchanan, Rove, Hannity and many of the other commentators – including me -- who perceive a possible offense may think, the relevant fact is that none of us happens to be a lawyer. (Rove, who sometimes plays at lawyering on Fox, is a high school graduate.) Among the nonpartisan (or not-so-partisan) attorneys who have expressed an opinion about the case, very few if any suggest that a criminal prosecution is likely to ensue. Melanie Sloan of Citizens for Responsibility and Ethics in Washington, one of the most respected watchdog outfits in the capital, says the opposite. According to her, "there has never been a prosecution based on such facts and I find it impossible to believe there would be. I think this is really just politics as usual. Parties routinely do what they can to clear the field for preferred candidates."

Politics as usual, of course, is a phrase descriptive of many things that happen in Washington, not all of them innocent. But Sloan is right if she means that previous administrations have used various instruments and inducements to help preferred primary candidates. A Media Matters researcher found a 1981 Associated Press story that reported that Reagan political adviser Ed Rollins had publicly offered "an administration post" to then-Sen. S.I. Hayakawa, R-Calif., if he chose not to seek reelection the following year.

Richard Painter, a Minnesota law professor who served as the chief ethics officer in the Bush White House (and also happens to be a Toomey college classmate and supporter), agrees with Sloan:

The allegation that the job offer was somehow a “bribe” in return for Sestak not running in the primary is difficult to support. Sestak, if he had taken a job in the Administration, would not have been permitted to run in the Pennsylvania primary. The Hatch Act prohibits a federal employee from being a candidate for nomination or election to a partisan political office [5 U.S.C. § 7323(a)(3)], He had to choose one or the other, but he could not choose both.

The job offer may have been a way of getting Sestak out of Specter’s way, but this also is nothing new. Many candidates for top Administration appointments are politically active in the President’s political party. Many are candidates or are considering candidacy in primaries. White House political operatives don’t like contentious fights in their own party primaries and sometimes suggest jobs in the Administration for persons who otherwise would be contenders…This may not be best for voters who have less choice as a result, and Sestak thus should be commended for saying "no". The job offer, however, is hardly a "bribe" when it is one of two alternatives that are mutually exclusive.

Some have suggested that Sestak disclose the details of his discussions with the White House about an Administration job. Generally, such discussions are highly confidential, as employment negotiations often are (the Bush Administration took care to prevent leaks about potential appointees and we were usually successful). Although Sestak has no legal obligation of confidentiality, he should get permission from the White House before disclosing further details. If the White House were to consent to disclosure, that would be the exception rather than the rule. At this juncture, disclosure would probably help defuse the controversy, but this is a call for the White House to make.

Of course, Painter’s bosses in the Bush administration never promised to run the most transparent government in American history. That vow was made by Obama and the same White House aides whose responses on this matter are now so opaque. Sooner or later, either Sestak or his erstwhile antagonists in the White House will have to explain exactly what happened between them -- especially if they want to deprive Toomey of what is quickly becoming his favorite subject.