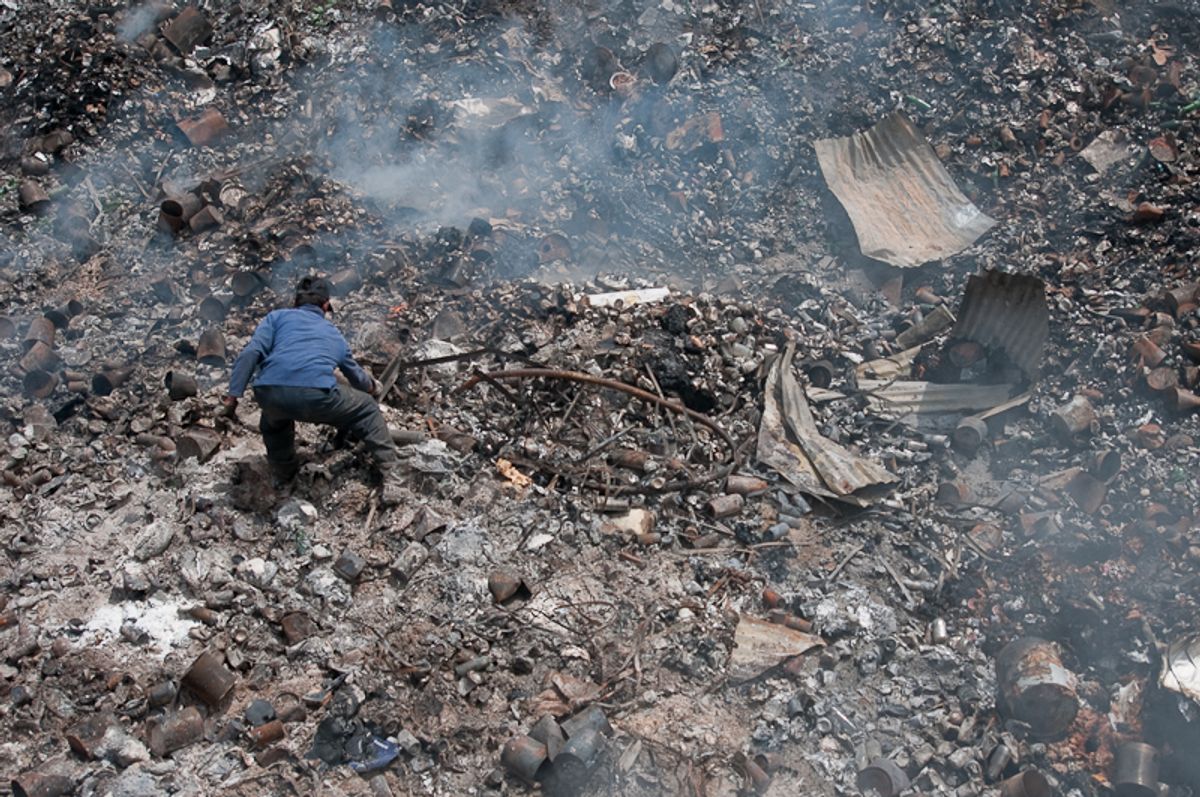 Downwind from a toxic trash fire, a pair of Afghan workers keep an eye out for the next truckload of waste as their lunch reaches a rolling boil in a kettle. Without any words, the hot water is poured onto the ground as soot-stained fingers divvy up 10 hard-boiled eggs. Hours earlier, these eggs were lifted from a dumpster outside the dining facility at U.S. Forward Operating Base Sharana in eastern Afghanistan. Adding salt, the men make quick work of the eggs while another trash truck steers into sight. Leaving behind only eggshells, these workers shuffle down a steep embankment and into a field of smoldering trash in search of scrap metal. By midday, a steady rain has soaked the men and reduced the hazardous smoke to a pale haze that extends across the dump site.

Inside Sharana, private contractors are paid by the U.S. government to transport and burn unsorted waste materials. According to a military representative, salvage rights to the scrap metal were awarded to a local landowner whose cooperation facilitated the initial development of this burgeoning base.

Plowing past thousands of melted water bottles, these local workers lug blackened mattress coils and scorched sheets of corrugated metal. With each step, their lungs are exposed to a mixture of partially combusted plastics and other dangerous particulate matter. Harmful toxins generated by burning plastics have been linked to reproductive abnormalities and immune disorders in people. Along with plastics, this dump site contains particulate matter from printed paper, paint, batteries, rubber, treated wood products, and various metals. Long-term exposure to these types of particulate matter can lead to serious illness and premature death.

"Breathing this smoke makes me feel sick," said Zar Gul, a young worker with a long mustache that hangs over the corners of his mouth. He is not alone. Burning eyes and asthma-like symptoms are a common complaint among men working near the open-air burn pit. Conditions may get worse. President Barack Obama's troop surge is expected to double the population of Sharana in the next six months. During the surge, the burn pit will be fueled by the combined trash of more than 9,000 people.

Existing Army regulations have failed to protect local workers at Sharana from the known hazards of trash fires. Military installations located outside of the U.S. are required to operate within the National Environmental Policy Act. These regulations establish strict standards for the operation of bases in order to safeguard the health of soldiers and civilians. In recent years, a new technical bulletin has allowed military officials and private contractors to circumvent some of these regulations.

Published in 2006, Army Technical Bulletin No. 593 provides guidelines for field waste management. This bulletin requires that disposal methods are "protective of human health." In spite of this, it authorizes the open-air burning of waste materials in emergency situations and only until incinerators can be installed. This bulletin also acknowledges that people in close proximity to improper burn methods could experience "significant environmental exposure." Apparent overuse of this emergency authorization has created a large-scale environmental disaster, sending toxic clouds skyward over hundreds of military bases in Afghanistan and Iraq.

Last November, at the Senate Democratic Policy Committee Hearing on military burn pits, Sen. Byron Dorgan of North Dakota pointed to a map of Balad Air Base in Iraq. "This picture shows these are bases that are big bases, have been around for a long while, very much like a city, and you would not expect someone to have a burn pit near an American city in which you are burning and putting into the air black plumes of smoke with toxic materials, hazardous materials, medical waste and so on, to expose those in that region," said Dorgan according to official transcripts.

Dorgan went on to explain that more than 20,000 people work and live at Balad Air Base. Even though several incinerators have been installed at Balad, the use of burn pits has not ended. Today, there are approximately 30 incinerators burning trash in Iraq and Afghanistan, with an additional 80 on back order.

During a recent telephone interview, a spokesperson with Disabled American Veterans expressed his concerns regarding this waste management catastrophe. "We need incinerators installed as quickly as possible," said Dan Clare, the DAV assistant national director of communications. "No civilians or service member should be exposed to the toxic air that spews from these burn pits." More than 500 veterans have contacted the DAV to report health concerns possibly related to burn pit exposures. Clare fears the actual number of injured service members and local civilians is far higher.

At the moment, thousands of reinforced American and NATO forces are located on bases near key population centers in Afghanistan. Each base has a dump site. The people of Afghanistan will slowly inherit these dump sites during the U.S. troop withdrawal scheduled to begin in 2011. When these trash fires are extinguished, serious health risks related to negligent waste management practices will remain in place. Dump sites often produce leachate when rainwater seeps through layers of contaminated soil. Leachate is a fluid that contains dissolved and suspended materials.

Without engineered treatment systems, leachate can pollute water supplies. Water insecurity is already a pressing problem in Afghanistan. According to the United Nations, only 23 percent of the Afghan population has access to safe drinking water. Any leachate contamination of aquifers or surface water could worsen preexisting conditions by limiting the usage of available water resources. Water scarcity has implications beyond public health. Social and economic development could become increasingly unsustainable if environmental damage from dump sites resulted in elevated water insecurity.

No leachate treatment systems or incinerators have been installed at Sharana, where local workers pile into empty trash trucks at the end of each day. Inside open-box beds, some of the men try to sleep as they are hauled across this American base. Before reaching the front gate, these workers spill from the trucks and are escorted to the fence line by foreign security guards contracted from Nepal. During the workday, these Nepalese guards avoid the trash fires and seasonal rains by watching the Afghan workers from inside a wood shack built on the crest of a hill. Hand-painted signs on the shack warn local workers to stay outside.

James Lee is a photojournalist and former Marine. He is scheduled to begin graduate work in international relations at San Francisco State University this fall. See his fourth installment of "Scenes From Afghanistan," a photo-essay series for Salon.