Why can't Hollywood get Jews right? 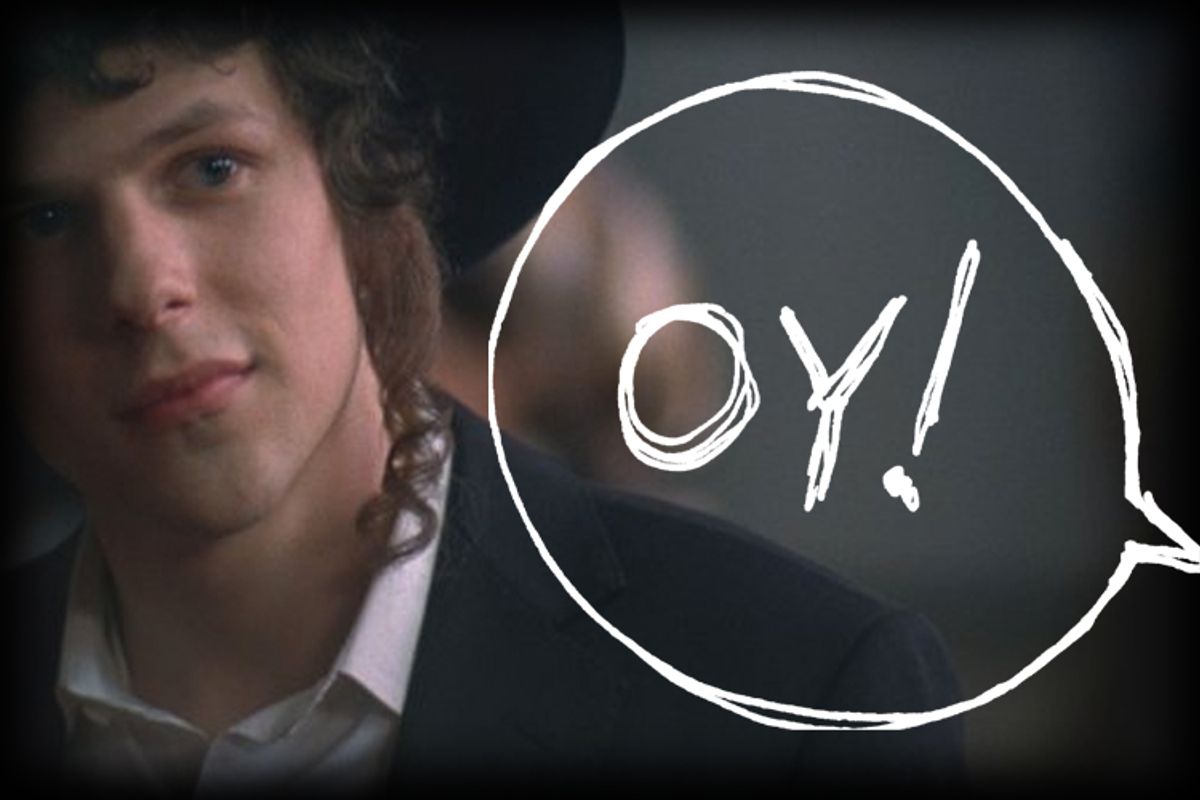 Why can't any movie get payes -- the long, curly sidelocks on Hasidic men -- right?

It's not like there aren't any Jews working in the film industry. Granted, they're probably Reform/Reconstructionist/atheist/High Holy Days or Buddhist Jews, but from "A Price Above Rubies" to "A Stranger Among Us," films that purportedly give a glimpse into the closed world of ultra-Orthodox Judaism come off as phony to those in the know.

Consider "Holy Rollers," the new film about Brooklyn Hasidim serving as drug mules to transport Ecstasy from Europe to New York. The payes on actor Jesse Eisenberg are like costume pasties emanating awkwardly from his curly, too-long-for-a-Hasid hair. That didn't stop the stark, sentimental and somewhat contrived indie from being nominated for a Grand Jury Prize at Sundance. Of course it was! What do non-Jews know? Or to paraphrase the "Holy Rollers" bad boy Yosef, played by Justin Bartha: One goy! Forget about him. God does.

Perhaps my demand for authenticity is silly or naive. After all, this is an era of reality television (the ultimate oxymoron). But "Holy Rollers," filmed a block away from my father's house in Flatbush, Brooklyn, has the arrogance to say it's offering insight into a secret universe when it's overstuffed with mistakes like a hot pastrami from Katz's (non-kosher) deli.

The Gold family (can you get any more generic?) hectically toss around random Yiddish words -- bubbeleh (darling), gelt (money), and baruch (blessed is God) when they mean "kineh hore" (ward off the evil eye). Interestingly, Adam Goldberg's Jewsploitation satire, "The Hebrew Hammer," used the same words correctly, and it's part of what made the film a cult classic. It doesn't help "Holy Rollers" that many of the actors, like Eisenberg, speak English perfectly rather than using the mishmash of English and Yiddish that most yeshiva boys speak, having grown up in Yiddish-only homes so that their sentences come out mangled: "You vant I should make something for you for dinner to eat?" It's a cadence captured perfectly by Philip Roth in "Portnoy's Complaint."

There are other inconsistencies: The men and women are on the same floor in the synagogue (whereas in reality there's usually a curtain an inch thick or women are housed in a separate floor); the film calls a "Kollel" (where men study for life) a "holel." I could keep going, like one of those eggheads who thrills in nitpicking every film. But I'm not showing off, I'm just flummoxed: How could an "insider's" movie get so sloppy?

"Holy Rollers" was created by 37-year-old Danny A. Abeckaser, or Danny A., as he likes to be called. When this actor/club owner saw a BBC news report that mentioned the role Hasidim played in the Ecstasy trade, he hired writer Antonio Macia (Jew? I think not) to pen the fictional story of one 20-year-old naif (Eisenberg) who unwittingly gets drawn to the dark side. As the film epilogue says, "Holy Rollers" is based on reports of one Israeli drug ring in 1988-89 that used Hasidim to carry more than 1 million pills from Amsterdam. In truth, the Israeli Ecstasy cartel using Hasidim and other mules continued for many more years, and was responsible for nearly the entire Ecstasy trade in New York.

I didn't grow up Hasidic either. Like Abeckaser, I grew up near the Hasidim, but much closer proximity-wise and religiously. I grew up Modern Orthodox, with relatives in the black hat world. (There's a whole galaxy of difference between those men who wear black hats and the ones who wear the long coats and the side curls.) There are some gaffes even I didn't catch. At a movie screening after-party, one former Hasid who still dresses the part expressed concern with what kind of Hasidim the guys in the film were. Were they from Crown Heights? From Williamsburg? From Boro Park?

I don't want to be unfair: "Holy Rollers" gets many things right: the boring rabbi's speeches that are supposed to be poignant, the bleak Brooklyn Hungarian split-level houses where neighbors have no boundaries, impossible blind dates where a young woman who can't even look Eisenberg in the eye asks him how many children he wants and what school they are going to go to.

The most realistic character in the movie is Justin Bartha, best known as the bland groom in "The Hangover." In "Holy Rollers," Bartha plays Yosef, the first Hasid to run drugs. The movie starts off with him blatantly smoking on the Sabbath and watching porn, and he ends up not only carousing with girls but popping the very pills he schlepped across the country. Bartha gets the tone right for the true hocker, which is yeshiva slang for religious hustler types, those guys you might see hanging out in a swirl of cigarette smoke outside the pizza store, wearing their suit jackets arrogantly on their shoulders, twirling their tzitzis fringes seductively, no longer caring much for community mores or the Holy One, Blessed Be He.

It's these gems that make the mistakes stand out more. But what "Holy Rollers," like most of its Hasidic predecessors, really misses is the motivation behind the desire to live in this community. It misses the warmth and the safety. It doesn't really show why anyone would want to belong to an ultra-Orthodox community, why anyone would be sad to leave there, why everyone wouldn't become a drug-running mule to make money and sleep with hot girls like Ari Graynor. I don't think Abeckaser gets what it means to belong to this community. What does come across is a bleak, wintry, poor, boundariless prison, and it doesn't make sense why anyone would want to go back to that once he had tasted the other side.

I know this, because even though I am no longer religious, I have had many long years of struggling with leaving my modern Orthodox community, with missing all the good in it even as I recognized the bad: the conformity, the racism, the focus on money, all portrayed in the film. As I went through my separation process, I had a terrible time explaining it to others, especially secular Jews.

That's why I wish films like "Holy Rollers" were better. Our world is divided into religion haters and true believers, and accurately rendered fiction could bridge the gap between the atheists and fundamentalists, to show them there is beauty in both.

Amy Klein is a freelance writer based in New York and Los Angeles. Her articles appeared in the New York Times, the Los Angeles Times, NPR, the San Francisco Chronicle, Hustler and MSN. She is working on a memoir about her formerly religious life.