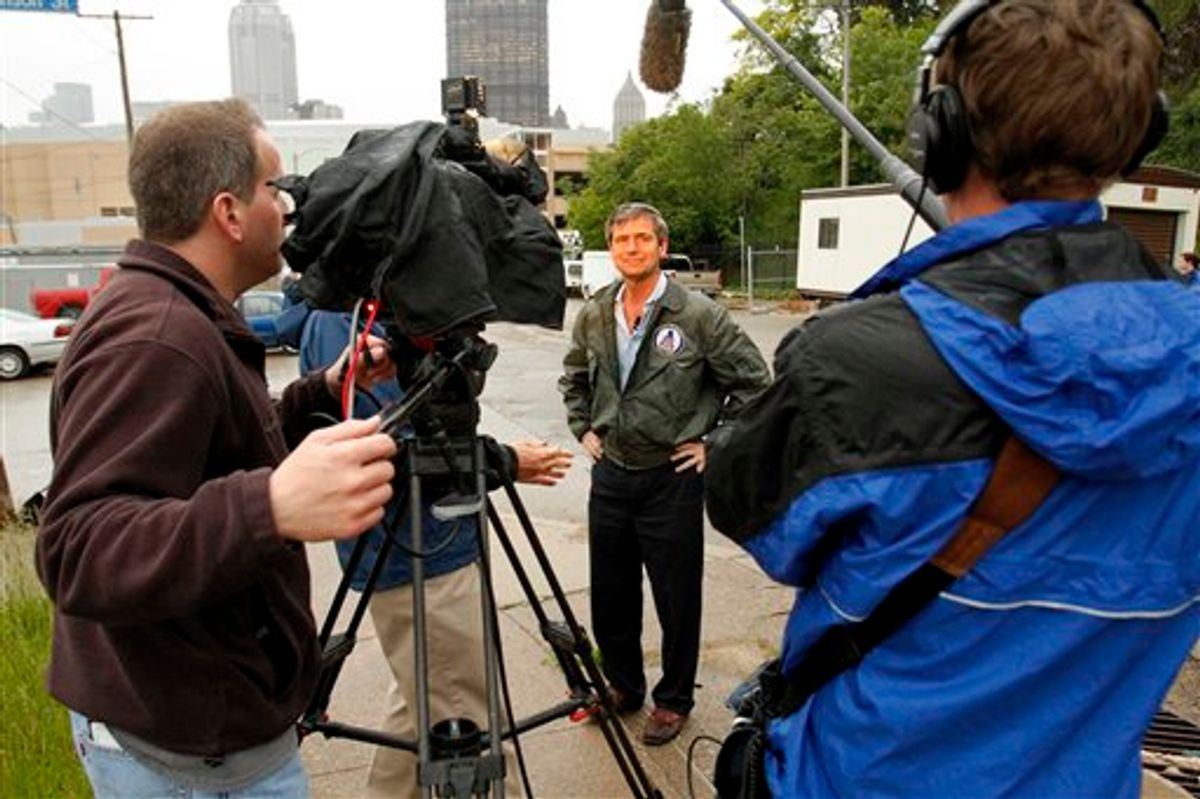 About an hour ago, the non-story about whether the White House offered Joe Sestak a job if he dropped out of the Pennsylvania Senate race officially became a ludicrous Washington obsession.

After a vote in the House, Sestak wandered out of the chamber and was immediately surrounded by nearly a dozen reporters. There was serious business to investigate, after all; someone somewhere had engaged in a political act, in a way that might have influenced politics! Many candidates would have walked away immediately. Sestak, though, is congenitally unable to ignore people waiting to talk to him (and constantly apologizes when, inevitably, the conversation does come to an end). So after waiting five minutes or so for a reporter from the Allentown, Pa., Morning Call to show up, he started taking questions about the "scandal" over the job offer.

As it turned out, he had very little to say. "All this will come all out tomorrow," he said, stumbling over his words as he tried to assure the media scrum that President Obama's promise that the White House would issue a statement on the matter "shortly" would, in fact, come true. "All this will come out, I think, as soon as the White House decides to speak, and then I'll have something to say."

Someone from the White House had apparently spoken to Sestak's brother Richard, who runs his campaign, and it was clear Sestak was under the impression whatever the administration put out would drop Friday. (Which, insofar as it's the day before a holiday weekend, would fit the usual White House pattern.) Evidently, the plan is for the White House to offer up its version of the story, which will probably say that no one offered him a job directly -- or illegally -- but in a way that still jibes with Sestak's reading of the situation. And that will be that.

"We'll wait to see what they have to say tomorrow," he said, three times in a row, in answer to different questions.

And then the reporters, frustrated by Sestak's unwillingness, or inability, to make news, started getting more aggressive, like he was secretly hiding something. "Which is a better job -- senator, or secretary of the Navy?" someone from Politico asked. (Sestak being Sestak, that cued up a story familiar to anyone who had seen him on the campaign trail, about how commanding his first ship was the best job he'd ever have and being a member of Congress was the second-best.)

Q: How much has this whole controversy taken over your Senate campaign at this point? You're continually asked about this.

A: Not at all, not at all. Absolutely not.

Q: You're followed around the building.

A: Not at all, this is the first time anyone's really bothered me like this.

That's right: this story has gotten to the point where the pressing question is whether the questions about it are a problem.

"I understand Washington, D.C.," Sestak said. "This is of interest to Washington, D.C. But the fact is, I was asked a question. Something happened seven, eight months earlier -- and if you look at the original interview, I just said yes, and beyond that I just said this is for others. No, [voters] are not worried about my job. They're worried about their job." (That last bit, he uttered in a raspy whisper, which he frequently uses for emotional emphasis.)

All told, Sestak stood there for more than 15 minutes, not really saying anything but refusing to walk away, lest he appear rude. He said he wanted the focus to remain on Pennsylvania; a reporter told him it would be, if only he answered the questions. "But I am still focused on it!" he announced. Eventually, the reporters ran out of questions, and Sestak begged out of the hallway, taking another five minutes to say his goodbyes.

The next chapter in this dopey saga is too easy to predict, though. At one point, Sestak promised he'd be available for questions once the White House statement came out. Which means you can bet that when the administration sends something out late Friday, someone on your TV will begin hyperventilating because Sestak hasn't shown up yet to corroborate, or not, the White House account. There are a lot of 24-hour news cycles to fill, after all, before November 2.