She's dumped tens of millions of her own dollars into the governor's race, but she's not winning. Sound familiar? 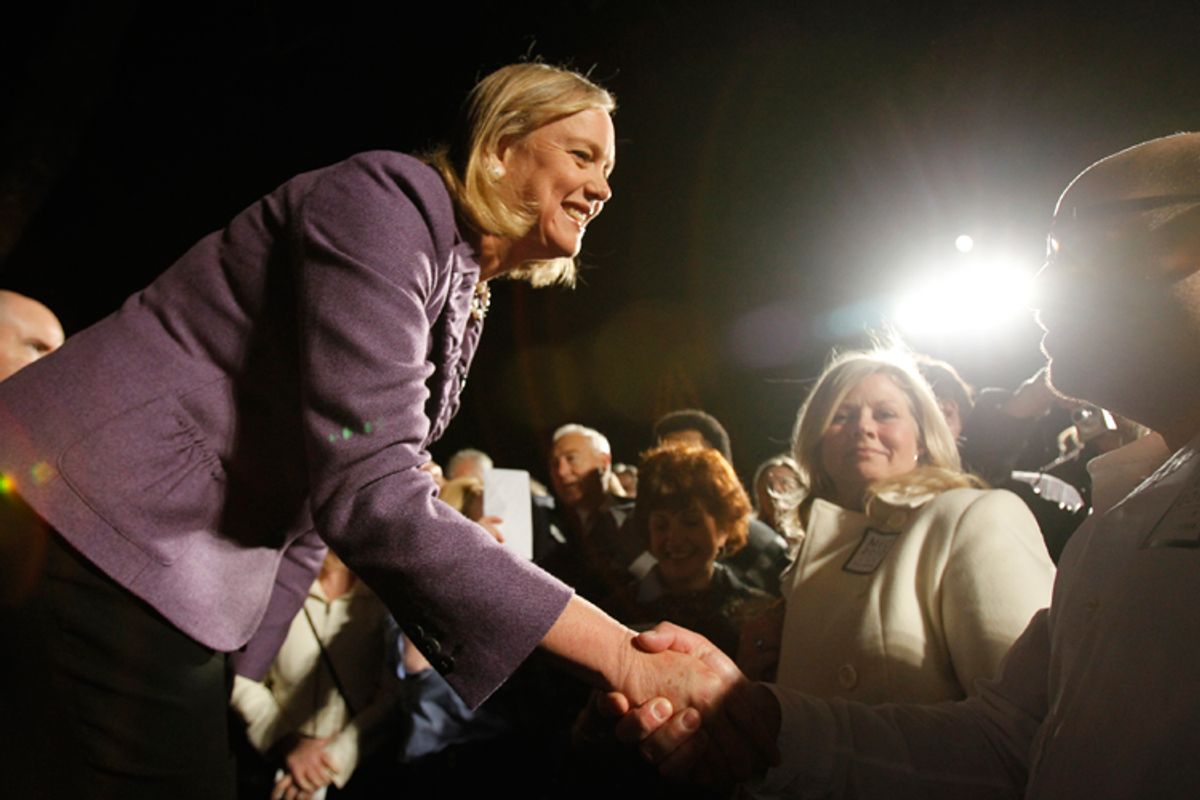 California is an incredibly expensive state in which to run a political campaign, a hurdle that multimillionaire Republicans Meg Whitman and Steve Poizner both think can be overcome with their vast personal fortunes. But history isn’t on their side: The Golden State actually has a reputation as a graveyard for high-profile self-funding political novices.

Whitman, the former CEO of eBay, and Poizner, who made a fortune in Silicon Valley before winning election as the state's insurance commissioner in 2006, are both seeking the GOP gubernatorial nomination in the June 8 primary. Whitman has already spent $64 million of her own money, while Poizner has thrown down $17.7 million of his own.

They’re walking in the footsteps of several high-profile self-funding failures, though. Michael Huffington, then a one-term congressman, dumped $28 million of his own money in a bid to unseat Democratic Sen. Dianne Feinstein in 1994. He lost by 2 points. Four years later, Al Checchi, the former chairman of Northwest Airlines, ponied up $40 million to run for governor -- only to lose in the Democratic primary to then-Lt. Gov. Gray Davis (who raised $7 million the old-fashioned way).

And the phenomenon of failing self-funders isn't limited to California. The Center for Responsive Politics found that in the 2008 cycle 49 candidates for the Senate or House put in at least $500,000 of their own money. Of them, only six House candidates and one Senate candidate won. (The one senator is a longtime incumbent, New Jersey Democrat Frank Lautenberg, a former CEO at ADP who has long written his own checks.)

For all the money she's spent in California this year, Whitman is struggling to keep her head above water. Most recent polls, from Research 2000, PPIC and even often-Republican-leaning Rasmussen, have her still trailing former Gov. Jerry Brown, the presumed Democratic nominee, by single digits -- with Brown having spent almost nothing on his campaign yet. And that assumes she even survives her primary against Poizner, who has positioned himself to Whitman's right and who is within striking distance in some recent polls. (Although a survey released Tuesday gave Whitman a 25-point advantage.)

Whitman and Poizner aren't the only extravagant self-funders this cycle. Republican professional wrestling impresario Linda McMahon has plopped down $14 million in trying to pick up the Senate seat in Connecticut vacated by Chris Dodd, with plans to spend up to $50 million. But Whitman has already shattered that, and if California's curse holds, she'll end this campaign as the biggest self-funding flop in history.