Perhaps we should ask after a DHS report says that attacks against the U.S. are at "an all-time high" 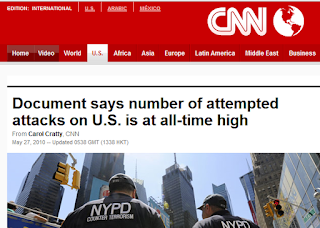 The article notes that a new classified Department of Homeland Security report documents that "the number and pace of attempted attacks against the United States over the past nine months have surpassed the number of attempts during any other previous one-year period."

Maybe, one day, we might want to ask:  "why"?  Is it because they Hate Us For Our Freedoms more than ever before?  Are we Extra Free now, thus increasing their Hatred to brand new levels?  Or are they still angry about George Bush's cowboy swagger even though he's been gone for a-year-and-a-half?  Or is it that those Crazy Primitive Hateful Muslim Fanatics are being pumped full of more unfair anti-American conspiracy theories than before?  Or does something else explain this?  Is there perhaps anything we're doing to cause it?  Asking all that may not be as fun or as profitable as picking out all the new rights we're going to restrict and renounce and the shiny new powers we're going to vest in our leaders each time there is another attempted Terrorist attack, but it's probably still a good idea to do it anyway.

UPDATE:  One other question:  does what we know about the last several accused Terrorists provide any clues -- attempted New York subway bomber Najibullah Zazi (one of the first Afghan citizens ever involved in a Terrorist plot aimed at the U.S.); accused attempted Times Square bomber Faisal Shahzad (an American citizen of Pakistani descent with a history of increasingly angry emails aimed at Guantanamo, the wars in Iraq and Afghanistan, American violence in the Muslim world and "the plight of the Palestinians," leading him to search for -- as he put it in 2006 -- "a way to fight back when rockets are fired at us and Muslim blood flows"); and accused Fort Hood shooter Nidal Hasan (the son of Palestinian parents on the verge of being sent to the war in Afghanistan)?

Do we find any clues in any of these most recent incidents as to why Terrorism aimed at the U.S. is, at least if DHS is to be believed, at "an all-time high"?