More mud is needed, crews might also use golf balls and rubber scraps to plug holes 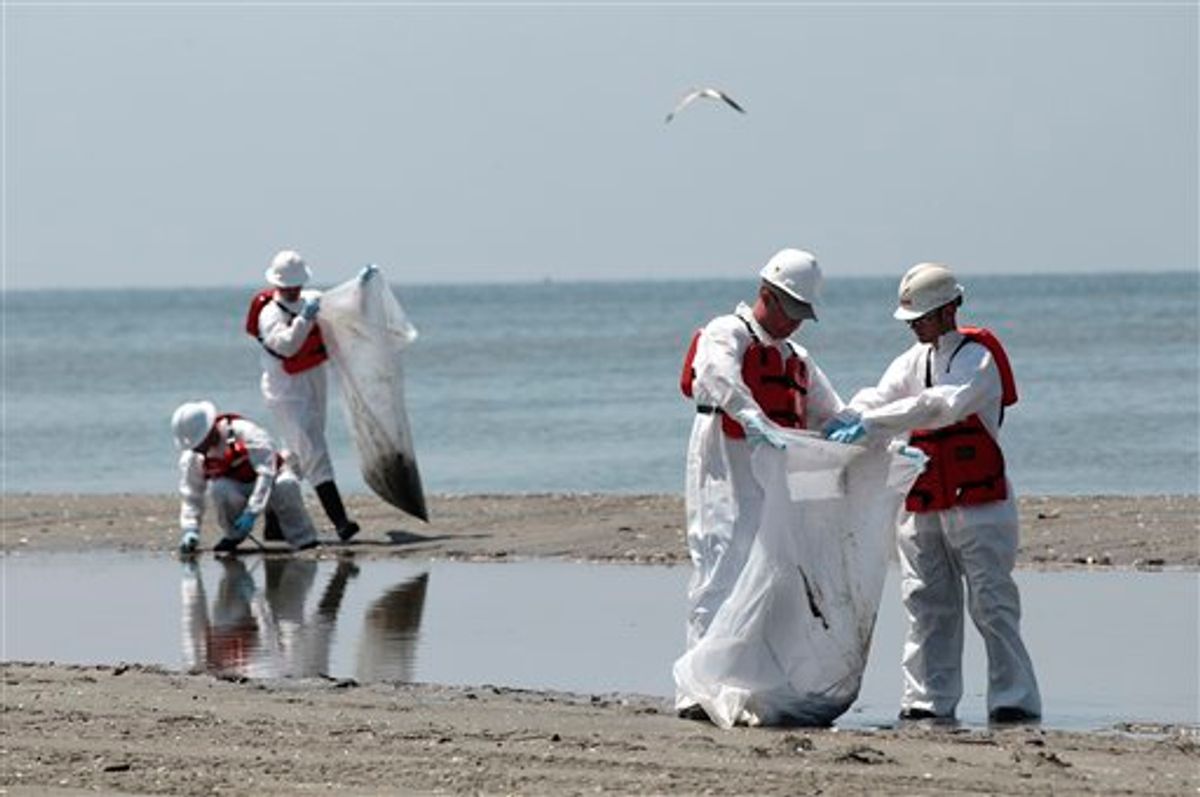 BP suspended its attempt to choke off the gusher at the bottom of the Gulf of Mexico on Thursday so crews could monitor their work and bring in more drilling mud, but the company said everything was going as planned and the effort was expected to resume later in the evening.

News that it would be at least 24 more hours before officials know if the procedure called a "top kill" will work came as dire new government estimates showed the disaster has easily eclipsed the Exxon Valdez as the biggest oil spill in U.S. history.

As the world waited, President Barack Obama announced major new restrictions on drilling projects, and the head of the federal agency that regulates the industry resigned under pressure, becoming the highest-ranking political casualty of the crisis so far.

"The fact that it's taken more than 24 hours is not a big surprise," he said. "We'll stay at this until we're successful or we determine we can't be successful."

He said crews may also shoot assorted junk such as golf balls and rubber scraps into a piece of equipment known as a blowout preventer to fill holes.

The top kill try was the latest in a string of attempts to stop the oil that has been spewing for five weeks, since the Deepwater Horizon rig exploded and sank off the coast of Louisiana. Eleven workers were killed in the accident.

If the procedure works, BP will inject cement into the well to seal it permanently. If it doesn't, the company has a number of backup plans. Either way, crews will continue to drill two relief wells, considered the only surefire way to stop the leak.

A top kill has never been attempted before so deep underwater.

The stakes were higher than ever as public frustration over the spill grew and a team of government scientists said the oil has been flowing at a rate 2 1/2 to five times higher than what BP and the Coast Guard initially estimated.

That larger figure would be nearly four times the size of the Exxon Valdez disaster, in which a tanker ran aground in Alaska in 1989, spilling nearly 11 million gallons.

"Now we know the true scale of the monster we are fighting in the Gulf," said Jeremy Symons, vice president of the National Wildlife Federation. "BP has unleashed an unstoppable force of appalling proportions."

BP spokesman Steve Rinehart said the previous estimate of 210,000 gallons a day was based on the best data available at the time. As for the new figures, he said: "It does not and will not change the response. We are going all out on our response."

The spill is not the biggest ever in the Gulf. In 1979, a drilling rig in Mexican waters -- the Ixtoc I -- blew up, releasing 140 million gallons of oil.

In another troubling discovery, marine scientists said they have spotted a huge new plume of what they believe to be oil deep beneath the Gulf, stretching 22 miles from the leaking wellhead northeast toward Mobile Bay, Ala. They fear it could have resulted from using chemicals a mile below the surface to break up the oil.

In Washington, Elizabeth Birnbaum stepped down as director of the Minerals Management Service, a job she had held since last July. Her agency has been harshly criticized over lax oversight of drilling and cozy ties with industry.

An internal Interior Department report released earlier this week found that between 2000 and 2008, agency staff members accepted tickets to sports events, lunches and other gifts from oil and gas companies and used government computers to view pornography.

Polls show the public is souring on the administration's handling of the catastrophe, and Obama sought to assure Americans that the government is in control and deflect criticism that his administration has left BP in charge.

"My job right now is just to make sure everybody in the Gulf understands: This is what I wake up to in the morning, and this is what I go to bed at night thinking about. The spill," he said.

Obama said he would put an end to the "scandalously close relationship" between regulators and the oil companies they oversee. He also extended a freeze on new deepwater oil drilling and canceled or delayed proposed lease sales in the waters off Alaska and Virginia and along the Gulf Coast.

Fishermen, hotel and restaurant owners, politicians and residents along the 100-mile stretch of Gulf coast affected by the spill are fed up with BP's failures to stop the spill. Thick oil is coating birds and delicate wetlands in Louisiana.

"I have anxiety attacks," said Sarah Rigaud, owner of Sarah's Restaurant in Grand Isle, La., where the beach was closed because blobs of oil that looked like melted chocolate had washed up on shore. "Every day I pray that something happens, that it will be stopped and everybody can get back to normal."

Charlotte Randolph, president of Louisiana's Lafourche Parish, one of the coastal parishes affected by the spill, said: "I mean, it's wearing on everybody in this coastal region. You see it in people's eyes. You see it. We need to stop the flow."

"Tourism is dead. Fishing is dead. We're dying a slow death," she added.

The Coast Guard approved portions of Louisiana's $350 million plan to ring its coastline with a wall of sand meant to keep out the oil.