Could "top kill" get Obama off the hook?

Or does pressure for a new energy regime spike higher than ever? 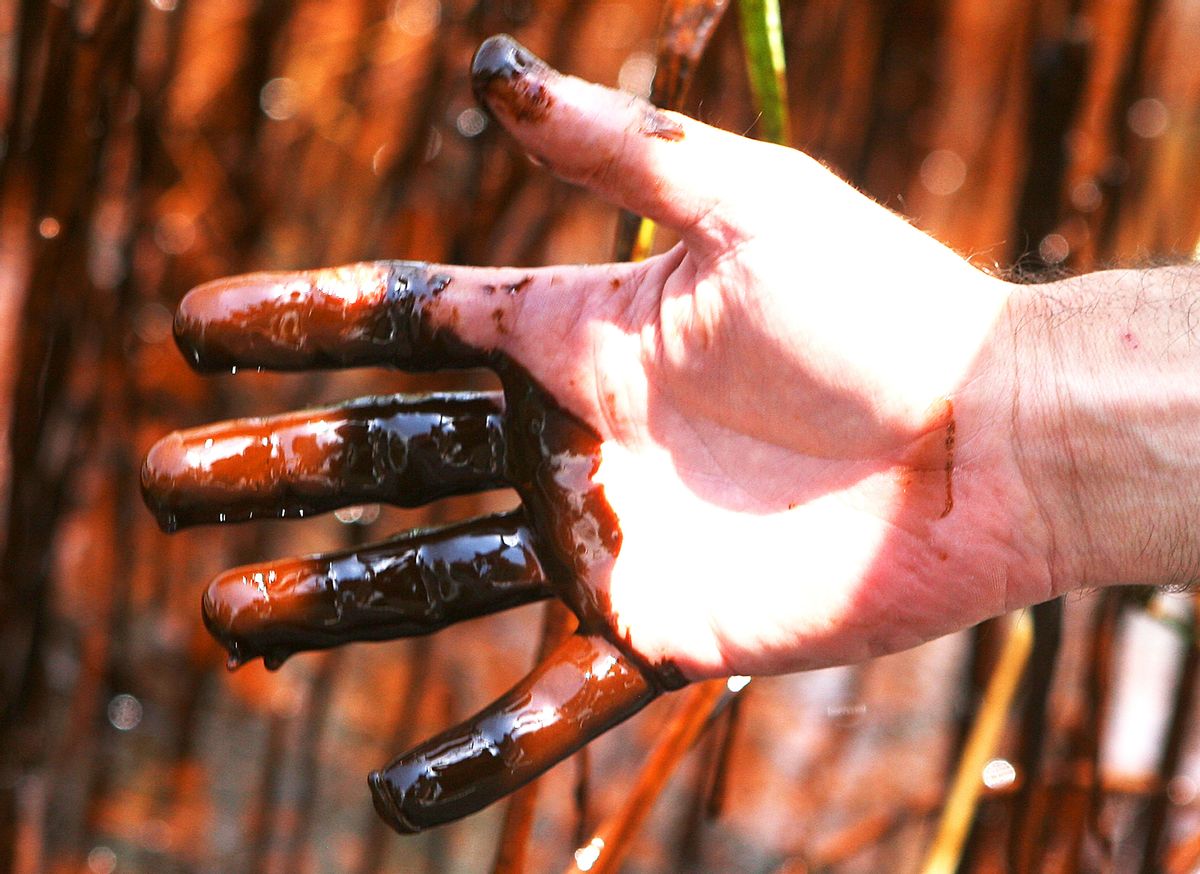 Garret Graves with the Coastal Protection and Restoration Authority shows his hand after collecting oil samples in Pass A Loutre near Venice, Louisiana on May 26, 2010. Louisiana Governor Jindal gave a tour of the area to reporters showing the damage of the oil spill. BP launched an ambitious deep sea operation to choke off a gushing oil leak in the Gulf of Mexico on Wednesday, but President Barack Obama cautioned Americans there was no guarantee it would work. BP is under intense pressure from Obama to bring a swift end to the five-week-old spill that threatens an environmental catastrophe and has ignited a political storm. QUALITY FROM SOURCE REUTERS/Sean Gardner (UNITED STATES - Tags: DISASTER ENVIRONMENT BUSINESS) (Reuters)
--

There could be no better visual metaphor for the political damage the Obama administration has taken from the BP oil spill than the live feed of the underwater gusher itself -- a dark cloud of hydrocarbon poison relentlessly forcing its way into the Gulf of Mexico. As long as the leak continues, the pain -- economic, ecological, political -- will just get worse.

Exxon Valdez, move over. According to an independent analysis coordinated by the U.S. Geological Survey, released Thursday, the flow of oil has been more than twice as powerful as previous estimates, thus qualifying easily as the worst oil spill in U.S. history. In the short term, consequences are inevitable -- a major shakeup and restructuring of the Minerals Management Service, and a host of new restrictions on offshore oil drilling, including a one-year timeout on any new drilling in the Arctic.

But what will happen to the politics of the spill after the leak is plugged? Scattered media reports early Thursday morning suggested BP's "top kill" effort to plug the well with heavy drilling mud was working -- though the official word from the Coast Guard went no further than "BP is having some success slowing the Gulf of Mexico oil leak."

Let's suppose the "top kill" is a success. The immediate likely outcome will be a severe drop in the political heat comparable to the drop in oil well pressure instigated by the mud. Attention will turn to cleanup and pinpointing liability, but there will no longer be the same sense of steadily expanding dread. The spill will move off the front pages, and the political sparring will jump to the next hot button issue.

And then, just as predictably, gas prices will start to rise again, drill, baby, drill pressure will start to rise again, and drilling will resume, in deeper and more dangerous waters than ever. Perhaps not during the Obama administration, but certainly in the decades to come. Environmentalist dreams that President Obama might take advantage of this disaster to put a halt to offshore drilling for all time are utterly unrealistic. Not just because Obama doesn't have the heart for it, but because the American people won't stand for it, once their pocketbooks start to feel the pain again. We learned that during the last campaign and we will surely learn it again.

What Obama can and must do is use this opportunity to refocus attention on clean energy development and climate legislation that provides economic incentives to move away from fossil fuels. It's all very fine to fire the head of MMS, and to demand new safety regulations, and figure out how to prevent the kind of accident that just occurred from happening again, but that's all a sideshow. Meanwhile an invisible plume of carbon dioxide boils into the atmosphere, infinitely more dangerous to our livelihoods in the long term than a single oil spill, no matter how gargantuan.

Obama made some stabs at connecting these dots during a tour of a solar power start-up in Fremont, Calif., on Wednesday. But he needs to do much more. Just as his administration seized on Anthem's healthcare premium hike to push healthcare reform, and the SEC suit against Goldman Sachs gave new force to bank reform, the White House must use the Gulf oil spill, whether plugged or not, to push for climate and energy legislation, now. Because as soon as the gusher halts, memories will start to fade. And dropping the ball on energy could be the worst mistake Obama makes.