Why your kids act the way they do 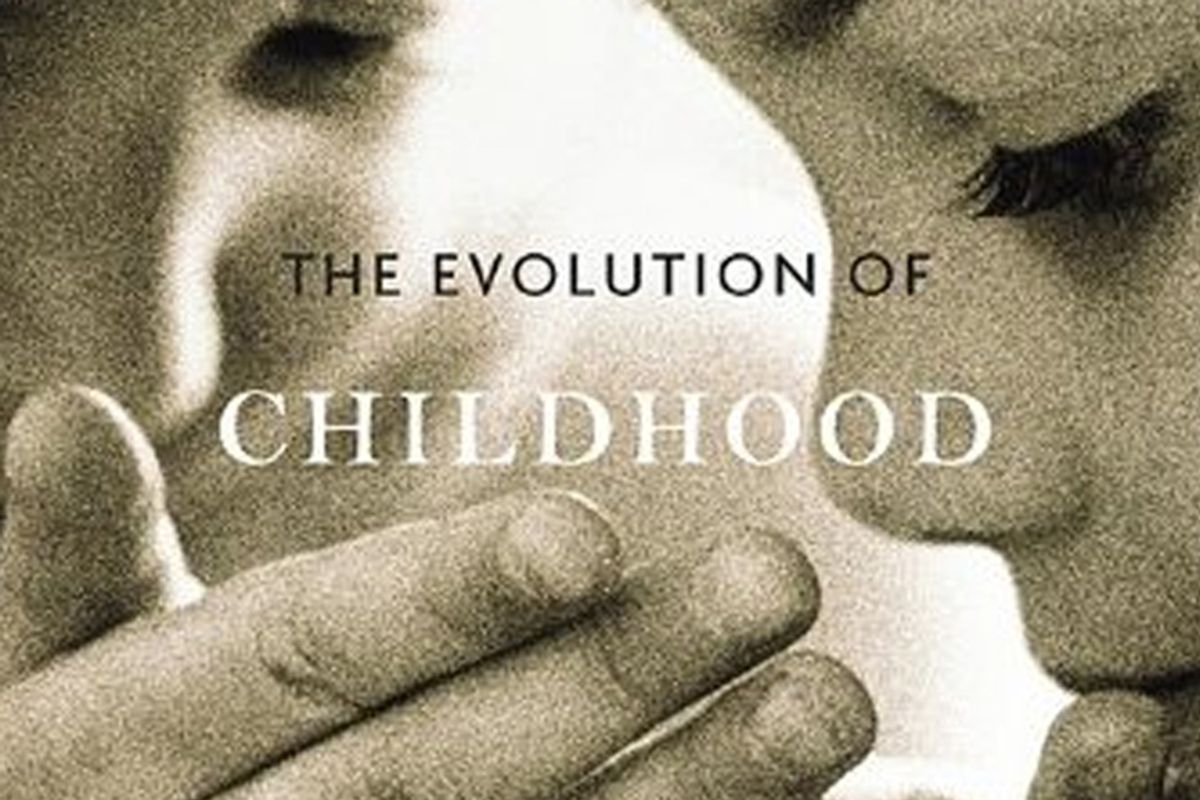 People, clearly, just can't get enough of watching babies do adorable things. Every week brings another adorable baby YouTube sensation, and recently, "Babies," a French film that follows four little ones in different corners of the world, has become a sleeper hit — despite its consisting of little more than documentary footage of newborns peeing, falling over and getting teased by older siblings. Why do we love watching them? Perhaps because we recognize parts of ourselves in them but still find something mysterious about the behavior of those tiny human beings.

"The Evolution of Childhood," Melvin Konner's massive and massively researched new book, goes a long way in dispelling a lot of that mystery. Konner, a professor in the departments of anthropology and of neuroscience and behavioral biology at Emory University, gives a detailed and expansive overview of what the fields of anthropology, evolutionary biology, psychology and genetics have taught us about human childhood. The book, in fairly accessible language, explains the evolutionary purpose of everything from babies' expressions (humans, apparently, are the only animal who can pull off the "relaxed friendly smile") to crying, early childhood outbursts and juvenile delinquency.

Salon spoke to Konner over the phone about what makes human childhood special, how science changed his own parenting, and why today's teenagers are more obnoxious than those that came before.

What makes human childhood so different from that of other animals?

First of all, we get pushed out at an immature stage of development because of the size of the newborn baby’s brain and the upright posture makes it harder to get through the birth canal. Secondly, our childhood is stretched out — we have a very long period, seven to 10 years, between early childhood and puberty, where a child’s mind becomes more mature. That’s when we start school; cultures throughout the world have to assign important chores to children like taking care of the baby or taking are of the herd of goats or whatever.

And there’s one other really unique thing. In humans, women live a long time after menopause. We think that's because we need grandmothers to be around longer so they can help with their daughters’ babies. In humans, you have a baby and a mother surrounded by many others: grandmothers, fathers, other women who are helping. Over the course of human evolution, this enabled us to actually out-reproduce the other apes.

Interestingly, that's one of the biological arguments for homosexuality — that gay people exist to help others raise children.

It is being studied. It certainly makes a lot of sense. It’s hard to give a good evolutionary explanation for homosexuality, since many homosexuals are not directly reproducing themselves or are reproducing at a lower rate. One of the ideas is that they’re helping to create the nest, and that would be something that would have parallels in a lot of species. Another idea is that people with different sexual orientations have higher levels of creativity, and certainly some of the great creative artists of all time have been gay. But that too hasn’t been established as a general principle.

Why is human childhood so much longer than in other species?

There are a lot of theories about that, but I think that the best is that we just need it to allow our brains to slowly develop and absorb all kinds of knowledge from the world and from culture. Since we’re the only species that has true culture, we have to have that prolonged childhood, especially between the time of weaning and puberty.

But as you point out in the book, human pregnancy is actually much shorter than would be ideal for the development of the child.

Babies should probably be born after 12 months of gestation, not nine. In the course of our evolution we began standing upright, and then started to expand our brains. But the birth canal, which was adapted to upright walking, was disproportionate to the big brain. We solved that by pushing babies out when they’re really too young.

As a result, they’re not very socially or emotionally appealing or competent when they're first born, and parents often get disappointed taking their baby home from the hospital. It's not until three months in that you get the baby gazing into your eyes and turning you into mush. That’s when babies start smiling pretty much at everything that goes "goo goo gaga," and parents tend to fall in love with their babies.

So why aren't babies likable during their first three months?

There are a number of possible causes. There’s a whole theory in evolution now called parent-offspring conflict, which becomes obvious in certain situations like weaning or in the teenage years. The idea is that as much as we love our children, they love themselves more than we love them. In the entirety of human history, until very recently, human newborns had a hugely high mortality rate in the first month of life, so it may have been adaptive to mothers to postpone their greatest attachment to the baby until a couple months later, when the baby has a much higher chance of surviving.

In our culture, we give kids the message that at a certain point they’re going to be on their own and that involves breaking emotional ties with their parents. So it’s kind of like, "OK, you’re going to kick me out soon, so I’m going to reject you before you get a chance." But one of the big discoveries in the last decade in child development research is that there’s a lot of brain development after puberty, approximately between age 12 to 20. The brain, especially the frontal lobes of the brain, which are involved in suppressing impulses and organizing behavior in a rational and mature way, continues to develop during that time.

But now the age of puberty is two to three years younger than it used to be — it used to be 15, but now it's about 12 and a half, or 13. We’re walking away from the evolutionary background that we had. Now the surge of testosterone that occurs in both girls and boys at that time, which facilitates aggression, is happening against the background of the less developed brain. Many psychologists are sensibly, I think, arguing that we should take this into account in criminal cases that involve teenagers and the judgments they make. They just don’t have the brain to make decisions in the same the way that an adult does.

I think it’s fair to say.

Why is puberty happening at younger ages?

The likely reason is improvements in nutrition that have allowed our children to grow faster and taller. There’s also some new evidence that suggests that children who grow up in more hostile environments, where they’re being neglected or abused, but are getting enough to eat — the evolutionary theory is that they grow up faster. They get out of their childhood environment faster and start their own reproductive life sooner.

Many people argue that children's gender is a socially constructed thing — and very malleable. Is that true?

I think the story of psychological and anthropological research over the last hundred years shows that sex roles are far more flexible than we used to think, and I don’t think we’re at the end of that process yet. But there's evidence among monkeys that male and female infants play differently. There’s more rough-and-tumble play and wrestling and chasing in boy monkeys than girl monkeys, and this occurs even if there’s no difference in the way they’re reared. So I don't think we're going to abolish the difference between the sexes, because it is partly biological. But you can reduce and you can exaggerate it, and different cultures and different historical periods have done either one of those. It’s certainly not a bad idea to try and reduce the amount of violence you see in human males.

There's been a lot of talk lately about how the Internet age is warping children — by making them more impatient and more prone to multitasking. Does this have the potential to fundamentally change human childhood, or is it just the human brain adapting to new technology?

One of the interesting things that happened over the last three or four generations is that IQ has been increasing. Some people say that it’s because of technology and increasing access to information. But early in our evolution we lived in small face-to-face groups, where people were talking to each other all the time, all day and well into the night, and where relationships were critical. In some ways things like Facebook are a return to the very strong connectedness of communities that we evolved but lost. Kids are recovering it through technology; it’s very interesting. I think it’ll be interesting to see how future human evolution will be affected by it.

Did writing this book change the way you look at your own children?

I started this project right around the time that my first child was born. She’s 31 now. There’s been a constant interplay between my learning about the science and evolution and biology and anthropology of childhood and the responsibilities of parenthood and the frustrations and magic of children’s behavior staring me in the face every day of my life. My late wife and I spent two years in the Kalahari with Bushmen before we had children. And it influenced us — our children were breastfed much longer than most American children and allowed to sleep in bed with us. It wasn’t that I was convinced that that was better; it was something that we felt comfortable doing because we knew that cultures throughout the world did it that way.

What do you make of the success of "Babies"?

I haven't seen it yet, but it looks like a very nice depiction of how babies grow and are cared for in four different cultures and I’m all for that. In America we need a lot more exposure to the variety of child-rearing methods in cultures around the world. People start wondering about which preschool to send their kids to, how many hours a week of soccer, and whether there should be piano lessons and guitar lessons and a thousand other things that we obsess over in our culture. I’ve seen a variety of child rearing around the world personally, and it’s amazing how compatible that big range of caring for children is with normal development. Children will make use of what we give them in one way or another. You can’t control the process.