Texas textbooks and the truth about the Confederacy

Texas is right: We should teach kids about Jefferson Davis and the Confederacy. But let's tell the whole story 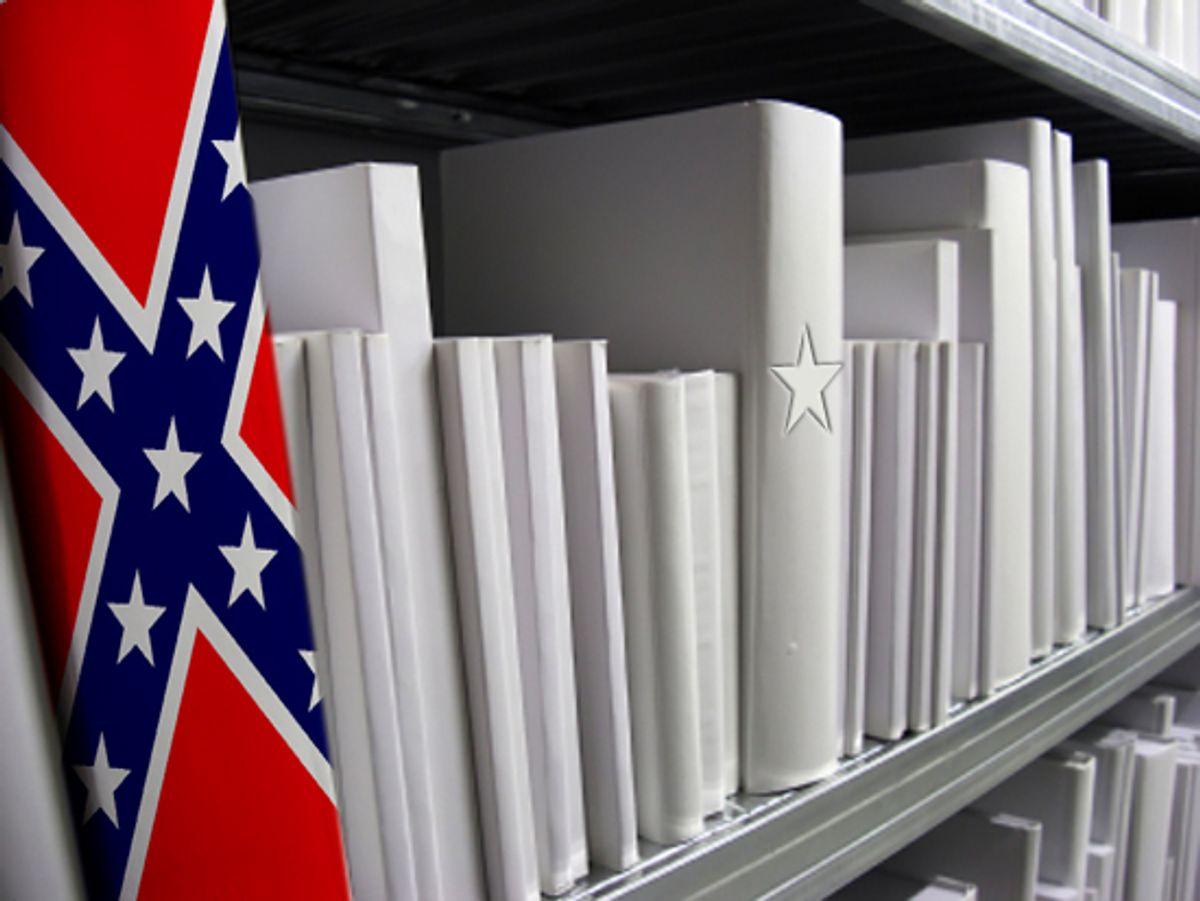 The Texas State Board of Education, the most astringently reactionary body since the Spartan Ephorate, has decreed that textbooks for the schoolchildren of Texas are to include Confederate President Jefferson Davis’s inaugural address along with the first inaugural of Abraham Lincoln.

This controversy holds particular interest for me. I am a fifth-generation native of Texas. One ancestor of mine had his farm in Georgia incinerated by Gen. Sherman. Another came to Texas in the federal army of occupation of Gen. Custer. One of the last things that my late grandfather said to me was: "Sam Houston was a traitor to the South!" The Civil War ended in 1865, but clearly its meaning is still contested in the 21st century.

By all means, let schoolchildren in Texas read Jefferson Davis’s inaugural address. But there should be more material from the Confederate side of the conflict than that. For generations, apologists for the Confederacy have claimed that secession was really about the tariff, or states’ rights, or something else -- anything other than preserving the right of some human beings to own, buy and sell other human beings.

That being the case, the education of schoolchildren in my state should include a reading of the Cornerstone Speech made by Alexander Stephens, the vice-president of the Confederacy, on March 21, 1861. With remarkable candor, Stephens pointed out that whereas the United States was founded on the idea, enshrined in Thomas Jefferson’s Declaration of Independence, that "all men are created equal," the new Confederacy was founded on the opposite conception:

The prevailing ideas entertained by [Thomas Jefferson] and most of the leading statesmen at the time of the formation of the old constitution, were that the enslavement of the African was in violation of the laws of nature; that it was wrong in principle, socially, morally, and politically ... Those ideas, however, were fundamentally wrong. They rested upon the assumption of the equality of races. This was an error. It was a sandy foundation, and the government built upon it fell when the "storm came and the wind blew."

Our new government is founded upon exactly the opposite idea; its foundations are laid, its corner-stone rests, upon the great truth that the negro is not equal to the white man; that slavery subordination to the superior race is his natural and normal condition. This, our new government, is the first, in the history of the world, based upon this great physical, philosophical, and moral truth.

Let the children of Texas compare what Stephens had to say about natural rights and human equality with Lincoln’s views on the subject, and contrast the ideals of the American and Confederate Foundings. That should make for interesting classroom discussions.

With a central government that was deliberately weakened at its formation, how did the Confederacy expect to prevail in a war against the forces of the Union? The answer is that the rich oligarchy of slave lords who ruled the South hoped that the British empire would intervene to secure their region’s independence, just as France had intervened in the American Revolution to help the United States win its independence from Britain.

When the British declined the offer, the geniuses in charge of the Confederacy realized that they would have to win their independence with their own resources. This was no easy thing to do in a wannabe country that prided itself on its absence of factories and banks. But they tried anyway. They threw libertarianism overboard and mobilized for war. They instituted a draft. They passed an income tax and inflated the currency to push citizens into higher brackets. Lacking a native Southern capitalist class, they put generals and colonels in charge of government-owned factories and munitions plants.

But conscription, taxation and state socialism were not enough. Too many Southern men were avoiding the draft or deserting, to say nothing of slaves who ran away to freedom or to join the U.S. Army. And there was the resistance. In the semi-mythical "free state of Jones" in Mississippi, in the Big Thicket in East Texas, in the Texas German Hill Country, rebels fought the rebellion, in the name of the United States or their own rights. The tradition of anti-Confederate resistance survived in the South after the war, to inspire Radical Republican "scalawags," populists, socialists and New Deal Democrats. The Southern right and the Northern left have erased the resisters from history. But not all of us have forgotten them.

Toward the end of the war, Robert E. Lee and Jefferson Davis came up with a plan. Following Lincoln’s Emancipation Proclamation, they proposed to save the Confederacy by freeing and arming slaves. In "Confederate Emancipation: Southern Plans to Free and Arm Slaves During the Civil War," Bruce Levine quotes some typical responses. Brig. Gen. Clement H. Stevens: "If slavery is to be abolished then I take no more interest in our fight." Gov. Zebulon Vance of North Carolina: "Our independence is chiefly desirable for the preservation of our political institutions, the principal of which is slavery." Once it became clear that the only way to save slavery and anti-statism in the South was to abolish slavery and adopt statism, the malfunctioning Confederate Mind short-circuited completely.

That is what my fellow Texans of younger generations should learn about the Lost Cause. Under British protection, the CSA might have evolved into a squalid banana republic run by landlords for the benefit of investors and industrialists in Britain. Without British protection, the CSA might have survived as a proto-fascist regime, with an economy of permanent war socialism and a government run by colonels. In either case, the victory of the Confederacy would have been far worse for most white and black Southerners than its well-deserved defeat. For ensuring that I would be born in the United States of America instead of a broken-down failed state that combined the least attractive features of apartheid-era South Africa and death squad-era Honduras, I say: Thank you, President Lincoln, and thank you, Gen.Grant.

So let the students of Texas read the inaugural address of Jefferson Davis, and the Cornerstone Speech of Alexander Stephens, and the Confederate Constitution. And let the readings conclude with the speech that Texas Gov. Sam Houston gave on Sept. 22, 1860, in my home town of Austin, the state capital. Houston had led the successful Texan revolt against Mexico in 1836 and had served as president of the Republic of Texas, then as a United States senator after Texas was admitted to the Union. His final campaign, before he was deposed from office by the Confederates, was his failed attempt to prevent the secession of Texas from the United States.

In front of that audience in Austin, the haggard old soldier mocked the claim that the rights of the Southern states were threatened in any way by the North:

Our forefathers saw the danger to which freedom would be subjected, from the helpless condition of disunited States; and, to "form a more perfect Union," they established this Government. They saw the effect of foreign influence on rival States, the effect of dissensions at home, and to strengthen all and perpetuate all, to bind all together, yet leave all free, they gave us the Constitution and the Union. Where are the evidences that their patriotic labor was in vain? Have we not emerged from an infant’s to a giant’s strength? Have not empires been added to our domain, and States been created? All the blessings which they promised their posterity have been vouchsafed; and millions now enjoy them, who without this Union would to-day be oppressed and down-trodden in far-off foreign lands!

What is there that is free that we have not got? Are our rights invaded and no government ready to protect us? No! Are our institutions wrested from us and other foreign to our taste forced upon us? No! Is the right of free speech, a free press, or free sufferage taken from us?

Has our property been taken from us and the government failed to interpose?

No, none of these! The rights of the States and the rights of individuals are still maintained. We have yet the Constitution, we have yet a judiciary, which has never been appealed to in vain -- we have yet just laws and officers to administer them; and an army and navy, ready to maintain any and every constitutional right of the citizen. Whence then this clamor about disunion? Whence this cry of protection to property or disunion, when even the very loudest in the cry, declared under their Senatorial oaths, but a few months since, that no protection was necessary? Are we to sell reality for a phantom?

Michael Lind is policy director of the Economic Growth Program at the New America Foundation and author of "What Lincoln Believed: The Values and Convictions of America’s Greatest President."