Behind the "celebrity deaths come in threes" curse

After Gary Coleman and Dennis Hopper pass, why are we all asking, Who's next? 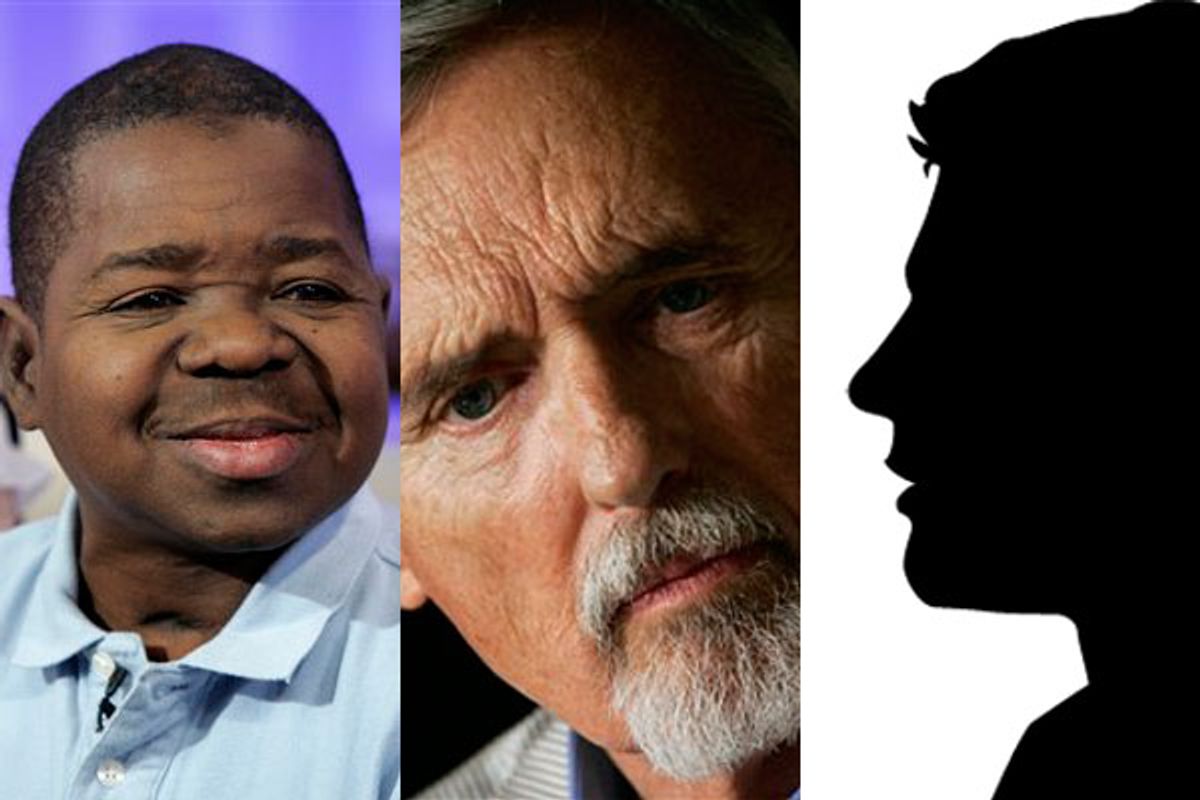 When the news broke on Saturday that Dennis Hopper had died, one day after the untimely passing of Gary Coleman, pop culture obsessives around the world had just one question: Who completes the trinity? Did Art Linkletter's death on Wednesday mark the beginning of the celebrity death trifecta? Did sculptor Louise Bourgeois' demise on Monday make it the hat trick? Or should Bret Michaels be sleeping with one eye open?

Humans are pattern-seeking creatures. We're the species that can find Jesus' face in a frying pan and cite the cover of "Abbey Road" as proof that Paul is dead. But when you really want to prove the uncoincidental nature of the universe, three is the magic number. Three has a certain music to it. It works, rhythmically. Its origins are shrouded in the mists of time -- the idea that deaths come in threes predates celebrity -- but high-profile deaths certainly gave the theory a boost.

In truth, the only authenticated incident of celebrity death occurring in triplicate was Feb. 3, 1959, when Buddy Holly, Ritchie Valens and the Big Bopper went down together in an Iowa plane crash. But we've been looking for approximations ever since, with occasionally persuasive results.

Isn't it weird that Johnny Cash, Warren Zevon and John Ritter all died in the same September week in 2003? Or that Suzanne Pleshette, Brad Renfro and Heath Ledger all shuffled off the mortal coil within a seven-day period in January of 2008? And when Michael Jackson and Farrah Fawcett died last June 25, just two days after Ed McMahon finally joined Carson on the other side, that couldn't have just been random, could it?

Note the elegant symmetry there. For the rules of celebrity death clusters to work, the stars should be of similar magnitude, and the deaths should come within a close time span. Hence, OxiClean pitchman Billy Mays' death last June 28 doesn't make for a rare quartet because he wasn't famous enough, and David Carradine's passing on June 3 is disqualified because it was too early in the month. And while trend spotters may wonder how Jimi Hendrix and Janis Joplin managed to die in the same month in 1970, or Princess Diana and Mother Teresa expired in the same week in 1997, two of anything is still officially just a coincidence.

The axiom isn't just handy for celebrities either. "Death comes in threes" is a persistent superstition even in families and communities where nobody's ever been the subject of an E! True Hollywood Story. And the notion that catastrophes and fads arrive in waves of three is the basis for 50 percent of all the stories in the New York Times' Style section.

Which brings us to Hopper and Coleman, the countless celebrity lives that no doubt remain in jeopardy, and the online speculation that will continue until the next famous person leaves behind this vale of tears. Though the two men's statures were far from equal, their quirkiness, their willingness to appear in some real schlock, and most of all, the proximity of their deaths unites them forever, begging for a third to complete the circle. You'd have thought the gods already proved their point when Lynn Redgrave, Ernie Harwell and Lena Horne died within days of each other earlier in month, but obviously no.

One could note that there are a lot of people in the world who've attained some degree of notoriety in their lives, many of whom are old, sick, fly in airplanes, have a more than recreational relationship with the pharmaceutical industry, or are otherwise subject to the laws of mortality. One could further say that Alexander McQueen, J.D. Salinger and Corey Haim made it to Boot Hill this year without setting off any copycat epidemics. But where's the fun in that?

Death, that great, random and cruel mystery, will have dominion over all of us yet. All we can do in the meantime is pretend to understand it -- with steadfast magical thinking, lighthearted wagering, or a little bit of both. Not because we're primitive or callous. But because sometimes when we lose people, especially people who made movies we love or TV shows that remind us of childhood or music we rocked out to our in our bedrooms, the need to believe in something is compelling and comforting. It imposes sense upon the senseless. So if it helps, I say that metal god Ronnie James Dio, who died the week prior to Coleman and Hopper, is a completely valid candidate for the trio. Consider fate appeased. And Larry King safe.