Petroleum engineer responds to the spill

An expert points out some technical mistakes 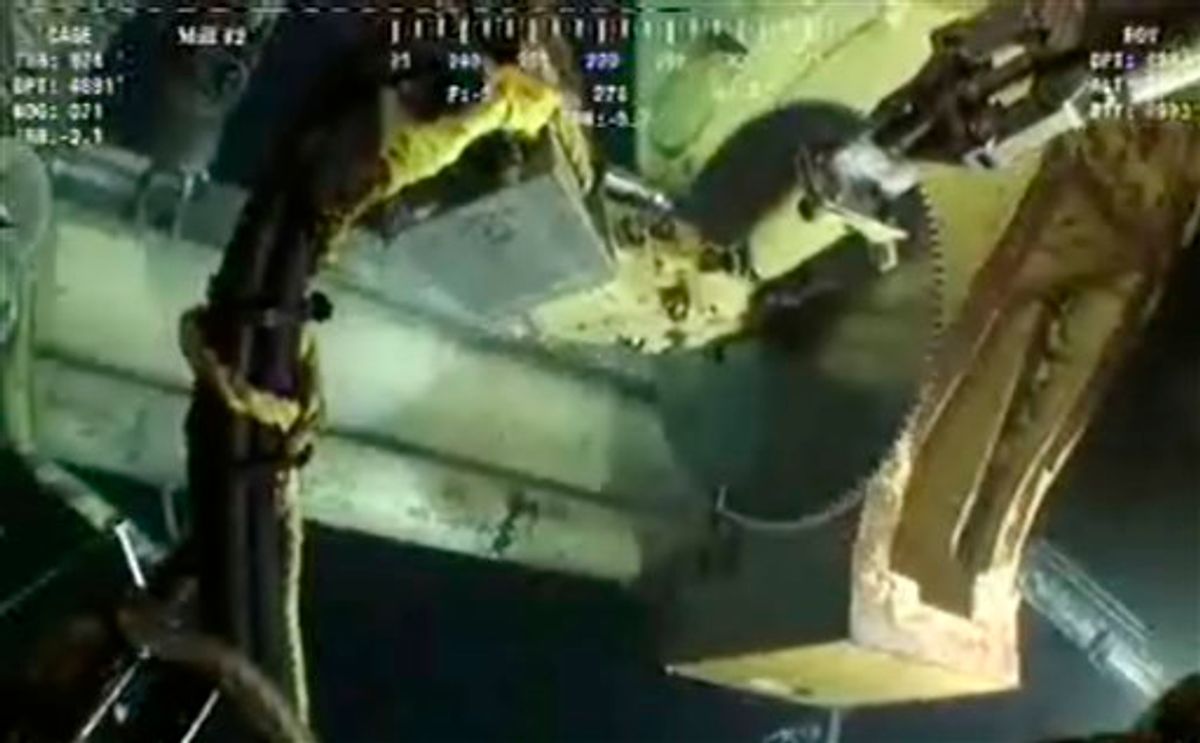 This image made from video released by British Petroleum (BP PLC), equipment is seen on the live feed from the Deepwater Horizon oil rig Tuesday, June 1, 2010. BP has turned to another temporary fix, an effort to saw through the pipe leaking the oil and cap it that could be tried as soon as Wednesday. (AP Photo/BP PLC) (AP)
--

A petroleum engineer who's worked in the oil industry tells me BP is doing the minimum to clean up the oil and everything it can to protect its bottom line. According to the engineer, here’s what BP should be doing right now to mitigate the damage. If the president were to put BP into temporary receivership, he’d have the power to get BP to:

1. Stop releasing dispersants. So-called dispersants are toxic, and it's crazy to add more poison to the Gulf. Dispersants do nothing to assist the environment in naturally cleaning the oil; their main use is PR. They reduce the number of ugly pictures of birds covered in pure black crude. Dispersants break the thick layer of crude into smaller globs, but that doesn’t help the Gulf and its wildlife. Most of the crude just mixes with the water to produce a goop that looks like chocolate ice cream but is highly poisonous.

2. Mobilize every possible tanker to siphon up crude from as close to the leak points as possible. Oil industry leaders as John Hofmeister (president of Shell Oil from 2005 until 2008) have recommended this, but inexplicably neither BP nor the federal government are talking about even trying this idea. BP currently has only one spot where they have inserted a tube into a riser, or pipe, that is leaking oil from the sea floor. The company is gathering the crude oil and siphoning it up to a drill ship for storage.

They should have at least a dozen collectors. BP has 24 tankers that are being used to make money for BP, not for clean-up duty. (President Obama should also use all necessary federal power -- or money, and send BP the bill -- to put as many tankers and refineries from other companies on the task.)

Mile-long pipes could be dangled down into the crude spewing from the wellhead and at each breach in the riser pipe, and the tankers could pump the crude mixed with water back into the tankers. They could then separate the crude and water in the tanker, and pump the water out on the spot. This should continue until each tanker is full of oil. The crude should then be taken to a refinery for processing, as other tankers take their place. Submersibles can be used to monitor the uptake into the dangling pipes, moving them as needed to keep them picking up as much crude as possible.

Even after some separation time in the tankers, the crude will be contaminated with water beyond the typical water contamination levels acceptable at refineries. This would drive up the price of gas in the short term. The president will need to go on TV and ask all Americans to cut their gasoline and energy usage in half, as an emergency response to the disaster in the Gulf, so that tankers and refineries can enact these far-from-perfect clean-up measures.