What does Israel fear from media coverage?

Just as they did with the war on Gaza, the Israelis block the media from speaking with witnesses 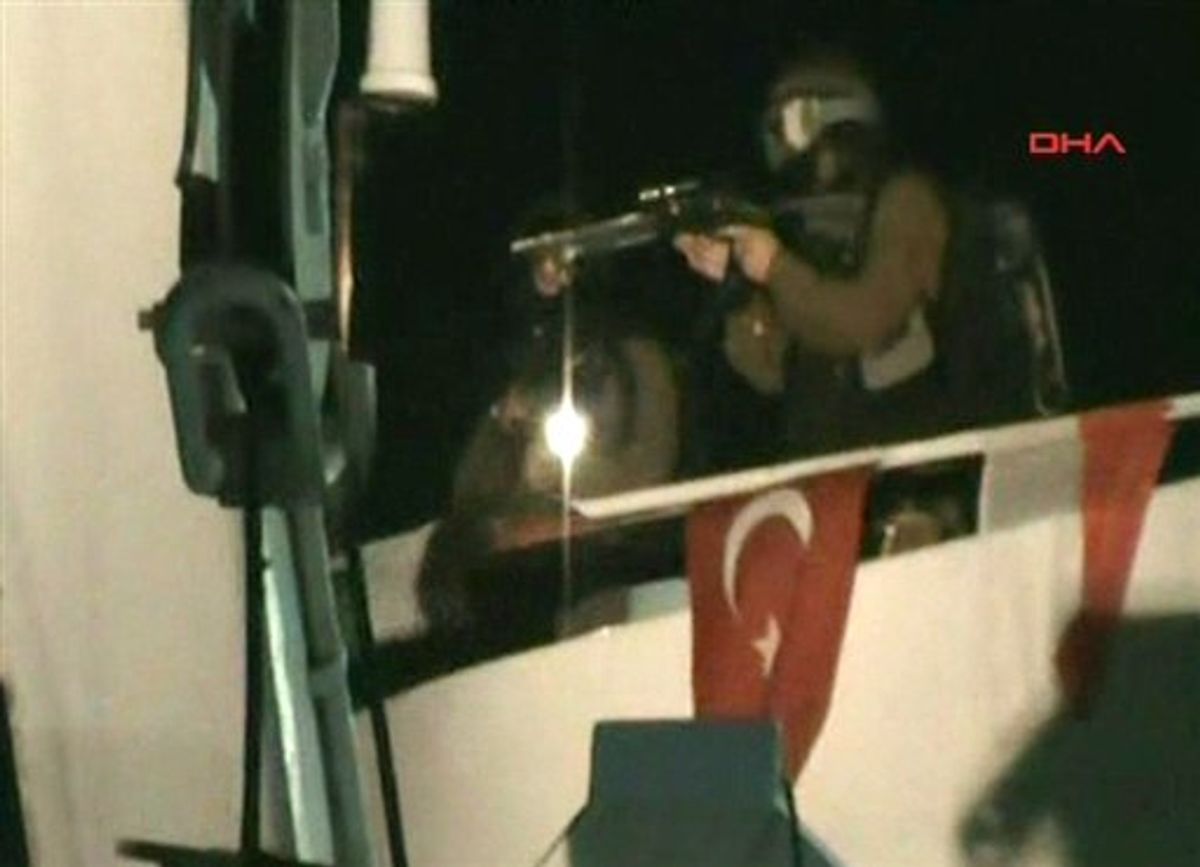 This video image released by the Turkish Aid group IHH Monday May 31, 2010 purports to show Israeli soldiers aiming a gun on the deck of a Turkish ship, part of an aid convoy heading to the Gaza Strip, after Israeli soldiers boarded the vessel in international waters off the Gaza coast. Israeli commandos on Monday stormed six ships carrying hundreds of pro-Palestinian activists on an aid mission to the blockaded Gaza Strip, killing at least 10 people and wounding dozens after encountering unexpected resistance as the forces boarded the vessels. AP Photo/IHH via APTN) ** TURKEY OUT ** (AP)
--

A day after Israeli commandoes raided an aid flotilla seeking to breach the blockade of Gaza, Israel held hundreds of activists seized aboard the convoy on Tuesday . . . .Reuters reported that Israel was holding hundreds of activists incommunicado in and around the port city of Ashdod, refusing to permit journalists access to witnesses who might contradict Israel's version of events.

Physically blocking journalists from reporting on their conduct is what Israel does (as well as others); recall this from The New York Times on January 6, 2009, regarding Israel's war in Gaza:

Three times in recent days, a small group of foreign correspondents was told to appear at the border crossing to Gaza. The reporters were to be permitted in to cover firsthand the Israeli war on Hamas in keeping with a Supreme Court ruling against the two-month-old Israeli ban on foreign journalists entering Gaza.

Each time, they were turned back on security grounds, even as relief workers and other foreign citizens were permitted to cross the border. On Tuesday the reporters were told to not even bother going to the border.

And so for an 11th day of Israel’s war in Gaza, the several hundred journalists here to cover it waited in clusters away from direct contact with any fighting or Palestinian suffering, but with full access to Israeli political and military commentators eager to show them around southern Israel, where Hamas rockets have been terrorizing civilians. A slew of private groups financed mostly by Americans are helping guide the press around Israel.

Like all wars, this one is partly about public relations. But unlike any war in Israel’s history, in this one the government is seeking to entirely control the message and narrative for reasons both of politics and military strategy.

Isn't it strange how Plucky, Democratic Israel goes to such extreme lengths to prevent any media coverage of what they do, any journalistic interference with their propaganda machine, in light of the fact that -- as always -- They Did Absolutely Nothing Wrong?  Is physically blocking the media from covering what happens the act of a government that is in the right?  Thomas Jefferson answered that question quite some time ago:

Our first object should therefore be, to leave open to him all the avenues of truth. The most effectual hitherto found, is freedom of the press. It is therefore, the first shut up by those who fear the investigation of their actions.

Israel is now not only detaining the victims of its aggression, but also threatening to prosecute and imprison them.  Israeli Internal Security Minister Yitzhak Aharonovitch said yesterday:  "All those who lifted a hand against a soldier will be punished to the full extent of the law."  So when Israel seizes ships in international waters and kills anyone who resists (and others standing near them), that is an act of noble, plucky self-defense.  But those who fail to submit completely to this lawless and barbarous act of aggression are the Real Criminals who will be prosecuted and imprisoned "to the fullest extent of the law."  In other words, not only is Israel -- which seized ships in international waters and killed civilians -- the Real Victim, but the Real Criminals are those on the ship.  But doesn't the victim of a crime usually want media coverage of what the criminal did?  How odd for the victim in this case to take such extreme steps to ensure that the world cannot hear from the witnesses.

Two other related points:  (1) as I noted yesterday, the real question for Americans is our own country's responsibility for what Israel does; as virtually the entire world vehemently condemns Israel's conduct, the U.S. -- as usual -- acts to protect the Israelis at the U.N. and joins it in heaping blame on its victims; and (2) Robert Farley highlights a small though typical piece of false Israeli propaganda, this one from supreme propagandist Jeffrey Goldberg of The Atlantic, which pervades our discourse in unchallenged form.

UPDATE:  For those who thought that Israel regretted what happened here in any way or would try to avoid such incidents in the future, you were quite wrong:

Israel will use more aggressive force in the future to prevent ships from breaking the sea blockade on the Gaza Strip, a top Navy commander told The Jerusalem Post on Tuesday.

Perhaps from now on, Israel can just blow out of the water (international waters) any and all ships it suspects might be trying to deliver food, medicine and other humanitarian aid to Gaza.  One thing is for certain:  if Israel did do that, the United States Government -- the Congress and White House and both political parties -- would defend and justify Israel's conduct, because that's what they reflexively do:  "there won’t be any daylight between the US and Israel in the aftermath of the incident on the flotilla yesterday," ABC News reported today, in case that wasn't already obvious.

Meanwhile, one of the many Israel-Firsters in the U.S. Congress -- Rep. Anthony Weiner, last seen lambasting President Obama for daring to publicly mention a difference between the U.S. and Israel -- today not only defended Israel's attack (obviously) but also, revealingly, pronounced:  "Even if we are the only country on earth that sees the facts here, the United States should stand up for Israel."  In other words:  who cares how isolated it makes us or what harm we suffer?  What matters is not American interests, but Israel.  That's a rare (though unintentional) act of candor when it comes to making clear the priorities of the U.S. Congress.   Finally, Newsweek's Ben Adler explains why the U.S. will never criticize Israel no matter what Israel does:  because huge numbers of Republican and Democratic politicians are vehemently devoted to that foreign country, and the ones who aren't are petrified of criticizing Israel, especially in an election year.  That, too, is some rare candor on the subject.

For while much about the incident remains unclear, a day of carefully parsed statements from the White House and State Department left at least one irrefutable aftershock: With much of the world expressing fury over the raid, the contrast with Washington’s muted response could not have been more striking.

So the virtually the entire world -- dictatorships and democracies; allies, enemies and neutral parties toward Israel; in Europe, Asia and South America -- have condemned Israel and rejected its claims.  But the U.S., standing virtually alone, embraces the Israeli claims and (as is virtually always the case) refrains from even the mildest criticisms.

As usual, we find here the Key Tribal Principles:  my side is always right, and the group which my parents taught me from childhood to love and cherish can do no wrong.

UPDATE III:  Now it seems as though the U.S. is almost engaged in self-satire, mocking the absurdity of its own blind and irrational devotion to Israel with increasingly comical positions:

Israel should lead investigation into attack on Gaza flotilla, says US

The United States has blocked demands at the UN security council for an international inquiry into Israel's assault on the Turkish ship carrying aid to Gaza that left nine pro-Palestinian activists dead.

A compromise statement instead calls for an impartial investigation which Washington indicated could be carried out by Israel.

As the next "compromise," perhaps the U.S. can offer to support an international investigation . . . led by Joe Lieberman, Sarah Palin, or Anthony Weiner.  As Scott Larson said on Twitter:  "Self-regulation has worked so well for BP that surely it will be just as shiny for Israel."  About the American position, CasualObserver added:  "BP should lead investigation into massive gulf oil leak, says U.S."  Indeed, Israel took so very seriously the conclusions of the Goldstone Report that there's no reason whatsover to doubt that they'd be the best party to conduct a candid and objective investigation of the flotilla attack as well.  Of course, we're a country in which having the Executive Branch investigate alleged lawbreaking by the Executive Branch is called "oversight," so maybe this all makes sense when viewed through that lens.