The Soviet Union employed the nuclear option to stop runaway gas wells. So what could possibly go wrong? 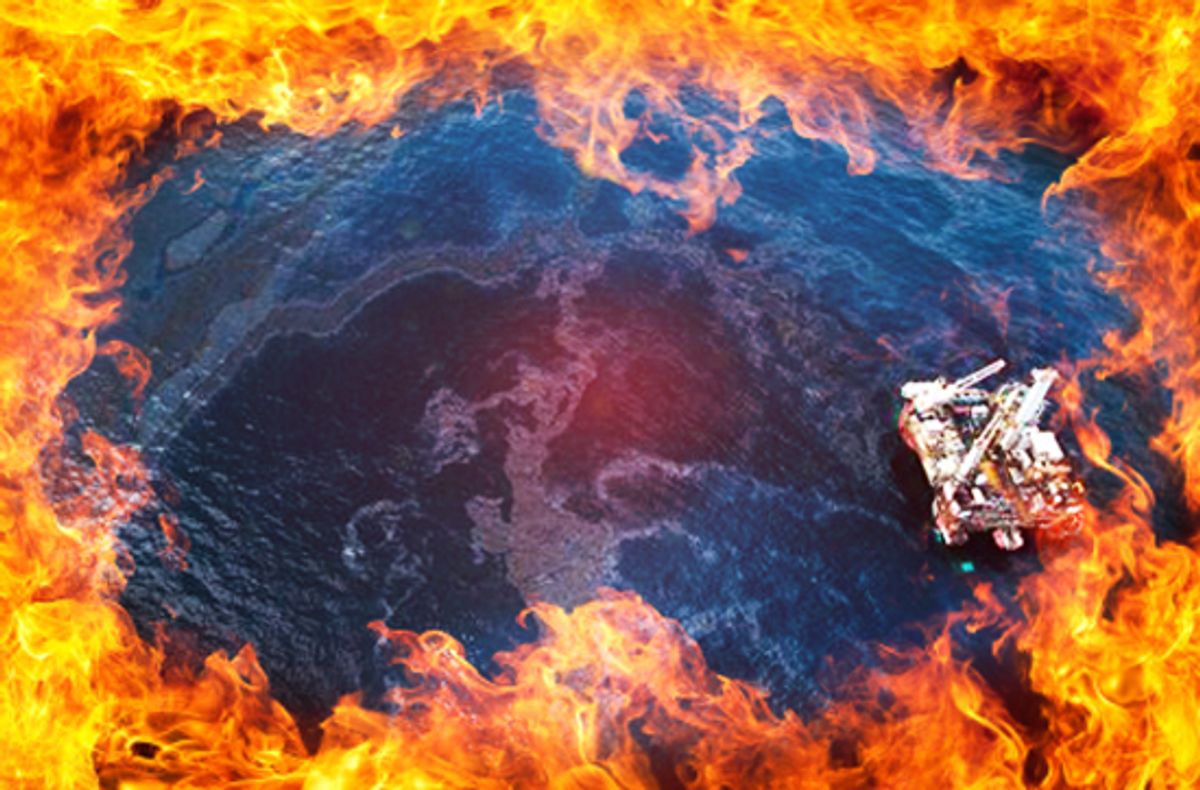 Why can't we just nuke the oil well out of existence? As each successive failure to stop the nation's worst-ever spill ratchets up popular outrage and political pressure on the Obama administration, chatter about the nuclear option has also heated up. We've got an extreme problem, so why not an extreme solution? Strange as it may seem to hear people advocating thermonuclear devastation to stop an environmental catastrophe, one can understand the psychological attraction. Enough with the nutty Rube Goldberg "top kill" kludges. Let's just blow the damn thing up and get it over with! Hey, the Soviets did it, why can't we?

This much we do know: In four separate instances dating back to 1966, the Soviet Union successfully used nuclear explosives to shut off runaway onshore gas wells. According to a report published by the U.S. Department of Energy in 2000, "The Soviet Program for Peaceful Uses of Nuclear Explosions," the first successful application of the nuclear option took place in the Urtabulak gas field in Southern Uzbekistan. The Urtabulak well had been gushing more than 12 million cubic meters of gas per day for almost three years and had defied numerous techno-fixes.

Finally, in the fall of 1966, a decision was made to attempt closing the well with the use of a nuclear explosive... Two 44.5-cm (13.5-in) diameter slant wells, Holes No. 1c and 2c, were drilled simultaneously. They were aimed to come as close as possible to Hole No. 11 at a depth of about 1500 m in the middle of a 200-m-thick clay zone.... The location for the explosive in Hole 1c was cooled to bring it down to a temperature the explosive could withstand. A special 3O-kt nuclear explosive developed by the Arzamas nuclear weapons laboratory for this event was emplaced in Hole 1c and stemmed. It was detonated on September 30, 1966. Twenty-three seconds later the flame went out, and the well was sealed.

Emboldened by their success, the Soviets proceeded to cap three other runaway gas wells in ensuing years, once in 1968 and twice in 1972. Another attempt in 1981 failed, however, and as far as we know, there have been no further efforts at nuclear well destruction. I cannot affirmatively attest to the authenticity of the footage in the following video, but the events recorded align pretty well with the DOE report, and it certainly makes for gripping viewing:

One of the Soviet scientists involved with the Urtabulak effort has already helpfully proposed that the U.S. follow the Russian example, inspiring animated discussion among the online Deepwater Horizon voyeurs who hang out at places like the indispensable The Oil Drum. What's Obama waiting for? What could possibly go wrong?

The first cautionary note would be to observe that there's a big difference between a gas well on land and a deep-water oil well. The primary reason why the Deepwater Horizon spill has proven so difficult to stop is precisely because the wellhead is 5,000 feet underwater, and the well bore penetrates another 13,000 feet below the seabed. Solutions that are possible on land or in shallow water are not readily applicable, or the well would already be plugged.

It's also worth noting that in the Soviet case, additional "slant wells" had to be drilled in order to get the nuclear explosive deep enough and close enough to the original well to be able to seal it off. Although some armchair nuclear option quarterbacks have recommended exploding a nuclear device at the seabed in the hope of fusing the surrounding seafloor into a giant cap, it's not clear that such a cap would be able to withstand the immense pressure exerted by the oil and gas bubbling from below. To properly place any explosive -- conventional or nuclear -- deep enough to be able to permanently plug the well would require drilling a new well -- a process that we already know is time-consuming.

This is just speculation, but I'm also guessing that we don't have a whole lot of data about what happens to the geology of a deepwater oil reservoir when a nuclear bomb is detonated in the general vicinity. I'd hate to be the president who authorized a nuclear strike against an oil well and discover that the blast created numerous fractures in the seafloor that allowed even more oil and gas to escape. It seems to me that one might want to hold such a tactic in reserve as a last resort.

And then there are the worst-case scenarios -- such as the possibility that a nuclear explosion might ignite a chain reaction of methane hydrate eruptions that could result in the most horrific global catastrophe since the Permian extinction:

You think the good citizens of Louisiana are upset now. Imagine how they'd feel after a tsunami followed by clouds of deadly methane gas laid waste to the Gulf?