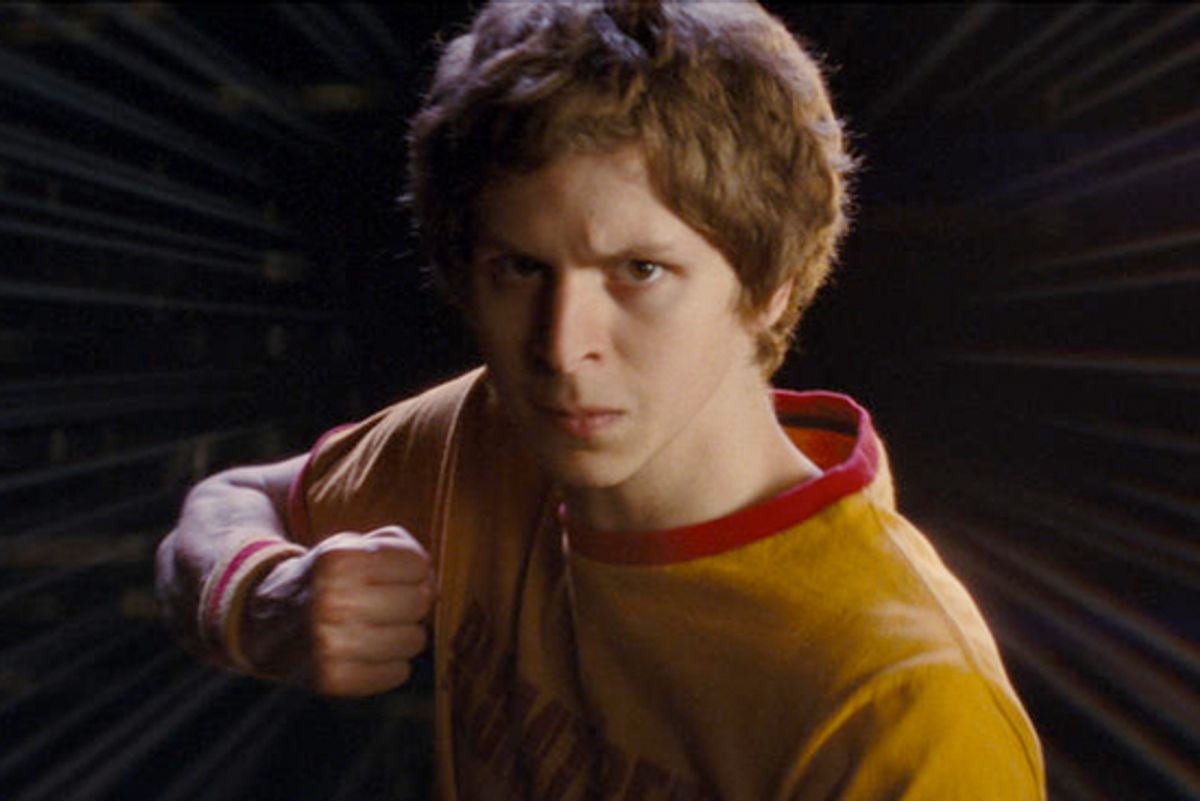 Michael Cera in "Scott Pilgrim vs. The World"
--

This is all Betty White's fault. Just a few months ago, the idea of using social media to give the people what they demand still had an appealingly rough and tumble, grass-roots feel. And when that feisty octogenarian took the stage to host "Saturday Night Live" in May, it looked for a moment like we nerds had a powerful voice. Well, Edgar Wright is here to kill your dreams and crush your revolution, dorks.

Wright already has godlike status among film buffs for directing "Shaun of the Dead" and "Hot Fuzz." To say that his forthcoming Michael Cera movie, "Scott Pilgrim vs. the World," is already the most slavered-over thing on the Net since Megan Fox's tattoos would be an understatement. So what does Wright do with all that love, all that built-in affection for this new production? Why, he holds it hostage. Late last week, Wright announced via Twitter, "Want to see the brand new SCOTT PILGRIM trailer now? Join us on Facebook! We shall release it at 100k fans! "

Throughout a tense "will they or won't they?" weekend, updates on the escalating head count were posted on Facebook, until at last Monday the magic number was reached, the trailer was posted, and a relieved planet breathed a sigh of relief. Power to the people!

Community-driven social media initiatives are effective -- and interesting -- because they're generated by real people using a uniquely direct medium to state their desires. That's not the same as a filmmaker -- or his studio -- saying, "Beg for it, bitches." Really, Pilgrim people? You're not going to release a new trailer until we become your fan or retweet or do whatever your publicity department's job is supposed to be? Until we drag in enough of our friends to meet your quota? That's like a pyramid scheme of buzz, and it's not exactly charming.

A message from one's peers has a different kind of potency than a bland, broadly aimed one from a corporation. It's understandable that everyone from moviemakers to Old Navy would be eager to cash in on that trust and intimacy.

But there's something very manipulative -- and pathetically needy looking -- about those fan "suggestions" from studios demanding the audience show just how much, how very, very, very much, it wants to see two goddamn minutes of a new movie. And those corporate contests that make people regurgitate some canned message so they can vie for airline miles or gift certificates -- that stuff is just sad. In other words, "Yo Gabba Gabba," blow me.

The quid pro quo thing becomes even more uncomfortably antisocial when the incentive at stake is supposedly altruistic. When Kelly Bensimon tweeted last month that she would donate $1,000 to the eco charity matteroftrust.org in the name of her 30,000th follower, she implored, "tell your friends, let's do this." Yes. Tell your friends. We can save the world if only that Real Housewives chick can get more Twitter followers!

Bensimon follows in the footsteps of Drew Carey, who said last year he'd give a million dollars to the LiveStrong foundation when he got a million followers on Twitter – a number he's less than halfway to making. And übertweeter Ashton Kutcher sweetened the race to get his first million followers by promising $100,000 to fighting malaria.

If celebrities are raising awareness to important causes or filmmakers are drumming up interest in their new movies, that's not inherently a bad thing. And hey, we're all out there promoting our personal brands. But the whole "Show me how bad you want it! Scream for it!" business is really best left to certain sexual situations and encores at Ozzfest.

The thing about crowd sourcing is that it can turn quickly into an angry mob, especially when you're coming off cheap, fake and (by implying you'll withhold the goods if we don't play along) mean. It's a little too close to threatening to shoot a dog, you know? As revealed in that hard-won, just-released movie trailer, Scott Pilgrim is a guy who needs to go from "no clue" to "gets it." So maybe he should start by reconsidering how he manages his fan page.