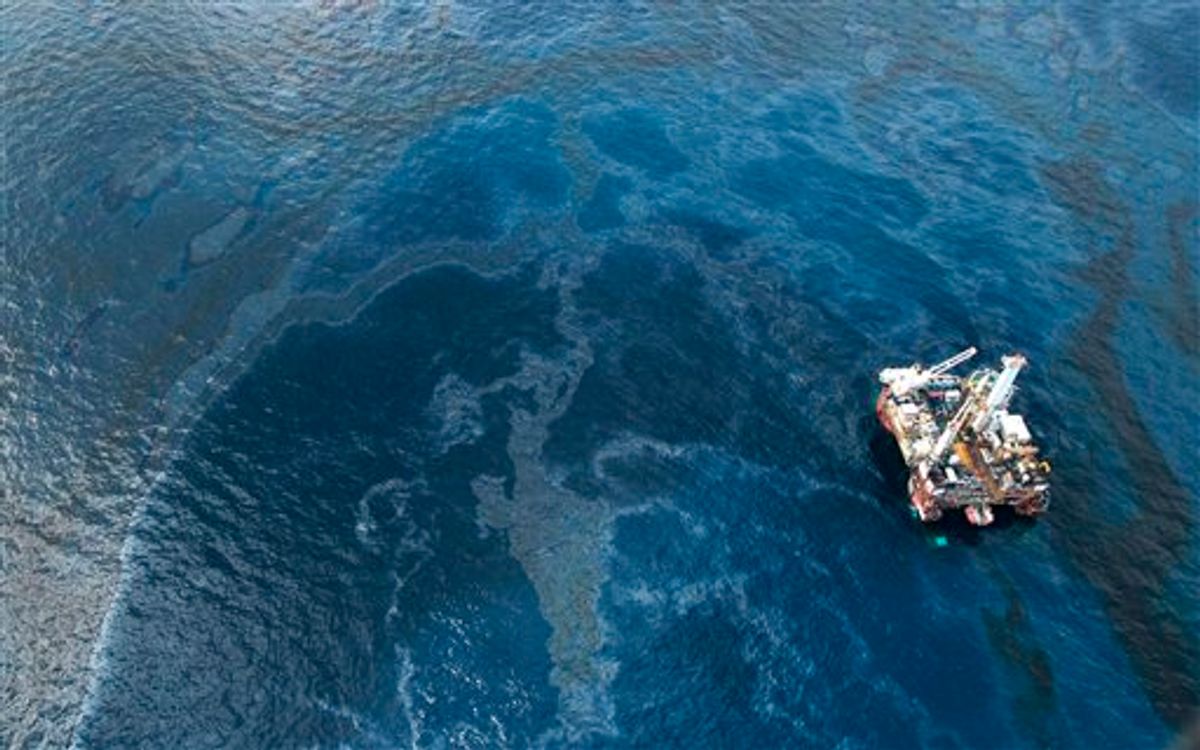 Oil surrounds the site of the Deepwater Horizon oil spill in the Gulf of Mexico near the coast of Louisiana, Monday, May 31, 2010. (AP Photo/Jae C. Hong) (AP)
--

Holder would not specify Tuesday which companies or individuals might be the targets of the probe. He says federal clean air and pollution laws give him the power to open the investigations.

Holder met with attorneys general from Louisiana, Mississippi and Alabama on Tuesday.

PORT FOURCHON, La. (AP) -- BP lost billions more in market value Tuesday when shares dropped in the first trading day since the company failed yet again to plug the worst oil spill in U.S. history, as investors realized the best chance to stop the leak was months away and there was no end in sight to the cleanup.

As hurricane season began on the fragile Gulf Coast, BP settled in for the long-term, and President Barack Obama said the government was ready to step up its response and prosecute if any laws were broken.

With the ambitious "top kill" abandoned over the weekend, BP's hope to stanch the leak lies with two relief wells that won't be finished until at least August. The company is, however, trying another risky temporary fix to contain the oil and siphon it to the surface by sawing through the leaking pipe and putting a cap over the spill.

Coast Guard Adm. Thad Allen, the national incident commander, said Tuesday that BP was making its first major cut with super sheers that weigh 46,000 pounds and resemble a giant garden tool. The company will also use a powerful diamond-edged cutter the resembles a deli slicer to try to make a clean cut above the blowout preventer, then will lower a cap over it with a rubber seal.

After several failed attempts to divert or block the well, BP's latest attempt involves cutting the broken riser pipe, making it spew as much as 20 percent more oil into the water for days while engineers try to position a cap over the opening.

Eric Smith, an associate director of the Tulane Energy Institute, said the strategy had about a 50 to 70 percent chance to succeed. He likened it to trying to place a tiny cap on a fire hydrant.

BP Chief Operating Officer Doug Suttles said there was no guarantee the cut-and-cap effort would work. He did say the company has learned from past efforts to contain the leak, which gives them a better shot at success.

"I'm very hopeful," Suttles said. "I think we'll find out over the next couple of days."

The cleanup, relief wells and temporary fixes were being watched closely by Obama's administration.

The president gave the leaders of an independent commission investigating the spill orders to thoroughly examine the disaster and its causes, and to follow the facts wherever they lead, without fear or favor.

The president said that if laws are insufficient, they'll be changed. He said that if government oversight wasn't tough enough, that will change, too.

Meanwhile, BP spokesman Graham MacEwen said the company was awaiting analysis of water samples taken in the Gulf before making a final determination on whether huge plumes of oil are suspended underwater. CEO Tony Hayward said Sunday there was "no evidence" of the plumes even though several scientists have made the claims.

Billy Nungesser, president of Plaquemines Parish, fired back at Hayward.

"We ought to take him offshore and dunk him 10 feet underwater and pull him up and ask him 'What's that all over your face?'" said Nungesser.

On the business side of things, the company's share price, which has fallen steadily since the start of the disaster, took a turn for the worse Tuesday, losing 15 percent to $6.13 in early afternoon trading on the London Stock Exchange.

That was the lowest level in more than a year. The shares have now lost more than a third of their value, wiping some $63 billion off BP's value, since the explosion at the Deepwater Horizon oil rig six weeks ago.

BP said early Tuesday it had spent $990 million so far on fighting and cleaning the spill, with multiple lawsuits for damages yet to be tallied.

The Coast Guard also announced that it was replacing the admiral who has been the federal on-scene coordinator since the oil rig exploded, though the agency said the change was previously planned. Rear Adm. Mary Landry will now return to duties as commandant of the 8th Coast Guard District in New Orleans to focus on hurricane season preparations.

BP failed to plug the leak Saturday after several attempts with its top kill, which shot mud and pieces of rubber into the well but couldn't beat back the pressure of the oil.

The spill has already leaked between 20 million and 44 million gallons, according to government estimates.

The National Oceanographic and Atmospheric Administration also announced that almost one-third of federal waters -- or nearly 76,000 square miles -- in the Gulf were closing to commercial and recreational fishing because of the spill.

The relief well is the best chance to stop the leak. A bore hole must precisely intersect the damaged well, which experts have compared to hitting a target the size of a dinner plate more than two miles into the earth. If it misses, BP will have to back up its drill, plug the hole it just created, and try again.

"The probability of them hitting it on the very first shot is virtually nil," said David Rensink, incoming president of the American Association of Petroleum Geologists, who spent most of his 39 years in the oil industry in offshore exploration. "If they get it on the first three or four shots they'd be very lucky."

The trial-and-error process could take weeks, but it will eventually work, scientists and BP said. Then engineers will then pump mud and cement through pipes to ultimately seal the well.

On the slim chance the relief well doesn't work, scientists weren't sure exactly how much -- or how long -- the oil would flow. The gusher would continue until the well bore hole collapsed or pressure in the reservoir dropped to a point where oil was no longer pushed to the surface, said Tad Patzek, chair of the Petroleum and Geosystems Engineering Department at the University of Texas-Austin.