It comes down to its particular soil and climate. So, what about sustainability and global warming? 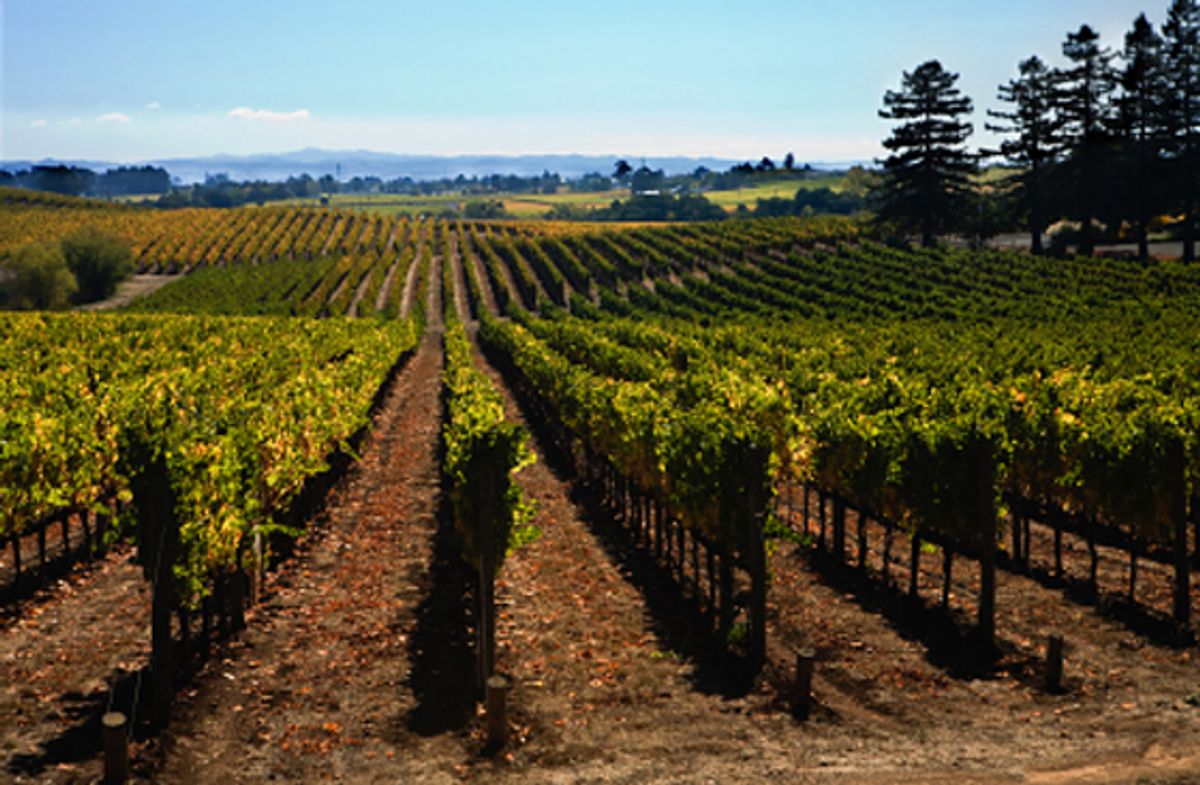 Sure, any skilled winemaker can elaborate a wine with a bag of tricks: New oak barrels, malolactic fermentation (changing harsh green acids to smooth, creamy ones), controlling alcohol, tannin, and acidity levels in the finished wine -- up or down. He or she can use advanced technology, like making oak chips give creamy vanilla flavors to a wine, as if it has been aged in expensive small barrel, or "microxygenate" a red wine before bottling -- introduce small amounts of oxygen, which ages wine -- so that a young wine tastes like a mature one in three years instead of 10. I could proffer a laundry list of high-tech approaches to winemaking (including computerized robot wineries) that would stun most wine lovers.

But ask anyone who spends his or her life in the wine business and all of them would agree that truly great wine is made in the vineyard, not the winery. Just as in cooking, if you start with near-perfect, in-season, local ingredients and then employ the most basic skills in the kitchen, you are likely to create a delicious meal. If, on the other hand, you start with inferior ingredients -- vegetables out of season, fish and meat that are really only borderline-fresh, the most talented chef in the world will produce a mediocre meal. The irony is that when you cook with great ingredients, you have to use restraint in the kitchen to highlight the flavors, textures, aromas, and colors of the food -- a kind of non-interventionist cooking. Alternately, when you cook with mediocre ingredients you have to work so hard to mask the flavors that the finished dish, while perhaps a great creative statement, just doesn't taste that good. The same is true in winemaking.

When it comes to quality wines, the familiar words "winemaker" and "winemaking" are insufficient. In fact, there is no word for "winemaker" in France, Italy, Spain, or Portugal, among other countries. We should think of these artisans as "winegrowers," whose activity is "winegrowing."

When you produce great wines, the traditional role of winemaker is tossed out the window. The person who ends up making fine wine spends at least as much time in the vineyards as he or she does in the winery, making sure that the grapes are healthy and picked only under the most ideal conditions. At the same time, the winegrower must respect the soil that gives life to the vine and understands that the climate (or the climates: for instance, the sunnier part of a vineyard has a different microclimate than the shadier) must cooperate each year in order to create a great vintage.

There is no such thing as the best way to grow a grape; those practices will differ based on what the French call "terroir," a term that is truly ineffable but refers to climate and sun exposure in the vineyard, even to the traditions of the winegrower, but most importantly to the soil. A friend once asked the famous French vigneron (winegrower) Jacques Seysses, proprietor of Domaine Dujac, what were the most important quality issues that allowed him to produce such exquisite red Burgundy wines. He answered that "there are three very important things that make our wines great. They are the soil, the soil, and the soil."

Jacques Seysses' comment was perhaps a Zen koan, but he was right. Domaine Dujac, located in the Côte de Nuits region of Burgundy, produces extraordinary Pinot Noir, but so does Domaine Drouhin, located in the Willamette Valley of Oregon. Look at a map: Oregon is on the same latitude as Burgundy; the climate is similar. Keep looking: Long Island is on the same latitude as Bordeaux. Both regions are strongly influenced by the currents and immediate proximity of the Atlantic Ocean, and both produce classic examples of Merlot, Cabernet Franc, and Cabernet Sauvignon. Pinot Noir from Burgundy, Pinot Noir from Oregon. Cabernet from Bordeaux, Cabernet from Long Island. Why do these wines taste so extraordinarily different when they're made from the same grape types? Small differences in climate, but extreme differences in soils.

The irony about the best soils for growing grapes is this: the rockiest soils, the least fertile soils, the soils that cannot support so many other crops are often the best soils for wine. Rocky soils rich in limestone, as in Burgundy, or soils filled with fine gravel (Bordeaux), or soils built from the animal and plant life of receding oceans and alluvial fans (the Napa Valley), or soils comprised largely of glacial deposits (the Hudson Valley), all are near-ideal for growing wine grapes. These soils drain easily, don't hold water at the roots of the vine, and so the grapes don't bloat with water, diluting flavors.

On the other hand, the rich, fertile soils of, say, California's Central Valley are too productive, too rich, too vigorous, and produce too many grapes. Low yields (normally less than three tons of fruit per acre) are required to create truly fine wines. Unlike commodity fruit and vegetable production, perfect wine grapes are all about quality --low yields of small, flavorful berries with a high skin to pulp ratio to create ripe tannins in fine wines -- not quantity -- high yields of bulbous, heavily irrigated, waterlogged grapes that should end up on our table, not in our glass.

The makeup of the soil also adds other dimensions of flavor and character to a wine. The chalky soils of, for instance, both Champagne, France, and Jerez, Spain, create a complexity of mineral flavors in their wines that separate them from wines made in the same style, from the same grapes, but grown elsewhere. Likewise, the gravel-based soils of Bordeaux (the area called Graves is named for its soil); the limestone of Burgundy; the shale and schist of Germany’s Mosel region; the soils that resemble small boulders in the Rhône Valley; the almost extraterrestial rocks that host the soils of Priorato in Spain; the glacial deposits of the Hudson Valley; the clay and loam of the Napa Valley.

In "The Feynman Lectures on Physics," Richard Feynman invokes a glass of wine: "a distillation of the earth's rocks, and in its composition we see the secrets of the universe's age, and the evolution of stars." It's a wonderful passage, and a clear message that the complexity of great wine starts in the complexity of our earth. But soil is a finite resource, and Nature just isn't making any new earth anytime soon.

In order to preserve our soils, land management has become a global public policy issue. Countries that are members of the European Union must agree to a policy that does not allow the creation of any new vineyards. For example, if a winegrower in Spain wants to plant a vineyard, that vineyard must be planted on ground that is already a vineyard, or was a vineyard in the past. Even in the Napa Valley, a place that has become a monoculture for wine grapes, there is a moratorium on the creation of new wineries (but not yet new vineyards). The current price of vineyard land in Napa -- more than $250,000 per planted acre -- is probably its own self-regulating mechanism. Today, if someone wanted to plant a new vineyard in the Hudson Valley, that person would be assured of making a small fortune, because he or she would have to start with a large fortune.

But why can't we just start growing grapes in other parts of the world? The answer is climate, the other main factor of the equation. Grapes can grow in plenty of places, but since the best soils for grapes are those that stress the vines, the best climates are those that are just barely warm enough for them to ripen, and wine growers are keenly attuned to the weather and temperature of their vineyards. Which means, too, that they are on the ground, feeling the effects of global warming and climate change. More on that tomorrow.

Check back tomorrow for Part 2 of this series, on the taste of climate change.