Burgers with an Asian touch

Like the ancient Silk Road, my take on an American favorite brings together different corners of the world 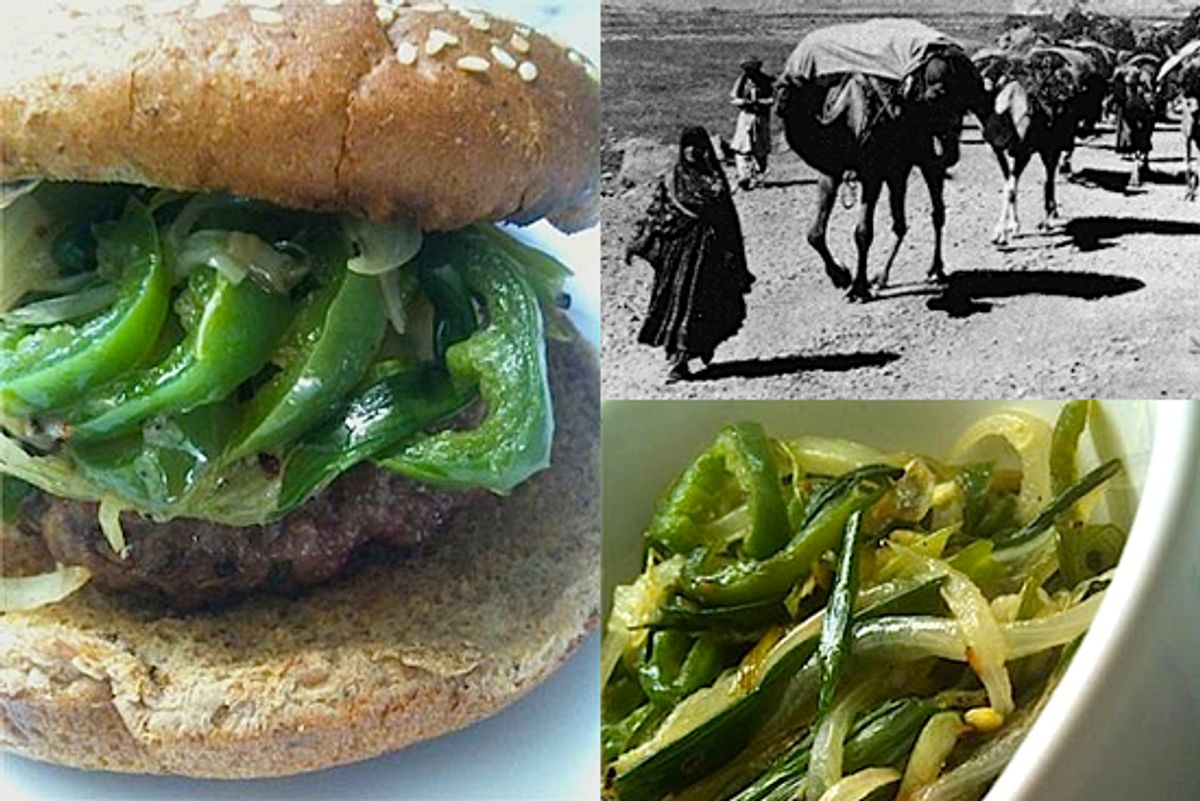 I dream of traveling along the Silk Road. I have romantic images of travel on camel or horseback to exotic towns filled with spices, music, poetry and silk. The Silk Road refers to the many routes that plied 4,000 miles between Rome and China, connecting Turkey, Central Asia and Persia along the way. Marco Polo is famous for having traveled along this route. Valuable commodities carried west on the Silk Road included silk, porcelain and gunpowder from China, which also supplied peaches and pomegranates; pepper, batik, spices, perfumes, glass beads and gems from India; incense, cinnamon, cloves and nutmeg from the East Indies; nuts, sesame seeds, glass and carpets from Persia; and coral and ivory from Siam.

While functioning as an important trade route from the 1st century B.C. to the A.D. 15th century, the Silk Road also became an important crossroads of the arts, ideas and religions, including Buddhism, Islam, Zoroastrianism, Christianity, Judaism, Confucianism, Taoism and others. Traversing the Silk Road has never been a safe or easy journey, involving vast swaths of desert, treacherous mountain ranges, and looters and bandits along the way. Those dangers persist today, perhaps even more so with the war in Afghanistan and violence in Pakistan. So I am left only to imagine what life along the Silk Road would be like.

While I may not get to the Silk Road soon, I realized that I am close to a modern-day equivalent. I work in Silicon Valley, on the peninsula stretching south from San Francisco to San Jose. Almost all of the major giants of the computer, software and Internet industries are headquartered here: Apple, Google, Oracle, Facebook and pretty much everyone else except Microsoft. With the rapid growth of the industry, these companies have recruited workers from around the world, with many from India and China. This has transformed the once homogeneous culture of the peninsula to a very international one, with large immigrant communities. Immigrants long for the foods of their homes, and so there is a wide range of Chinese and Indian cuisine available in this area, including some outposts of restaurants from those countries. There are also sizable Persian and Afghan communities. All of these cultures share a common history of the Silk Road.

One of the important crossroads of the eastern portion of the Silk Road was Xian, in China. The overland Silk Road route to the west began in Xian, the capital of China during the Han, Qin and Tang dynasties. While modernized like the rest of China, Xian preserves much of its multicultural heritage dating back to Silk Road times. Xian is perhaps best known for its Terracotta Army, the funerary art composed of over 8,000 soldier figures buried with the First Emperor of Qin (Qin Shi Huang, "shi huang" means the first emperor) in 210-209 B.C. In today's Xian, cultural influences from the West are present in the mosques, which still play an active role in the community. The food eaten in this area is referred to as "Chinese Muslim" and features flatbreads, wheat noodles, and lamb as staples, in contrast to the rice and pork that are more commonly consumed in Chinese cuisine. Chinese Muslim cuisine also embraces a more vibrant use of spices, dating back to the Silk Road trade routes.

For this week's Salon Kitchen Challenge, I've created a recipe for Silk Road lamb burgers. They're spiced with the flavors of the Silk road: cumin, scallions, onion and chili, and are inspired by a common lamb stir fry served in this part of China, and a dish that Marco Polo would likely have eaten.