Your guide to nail-biting summer reads 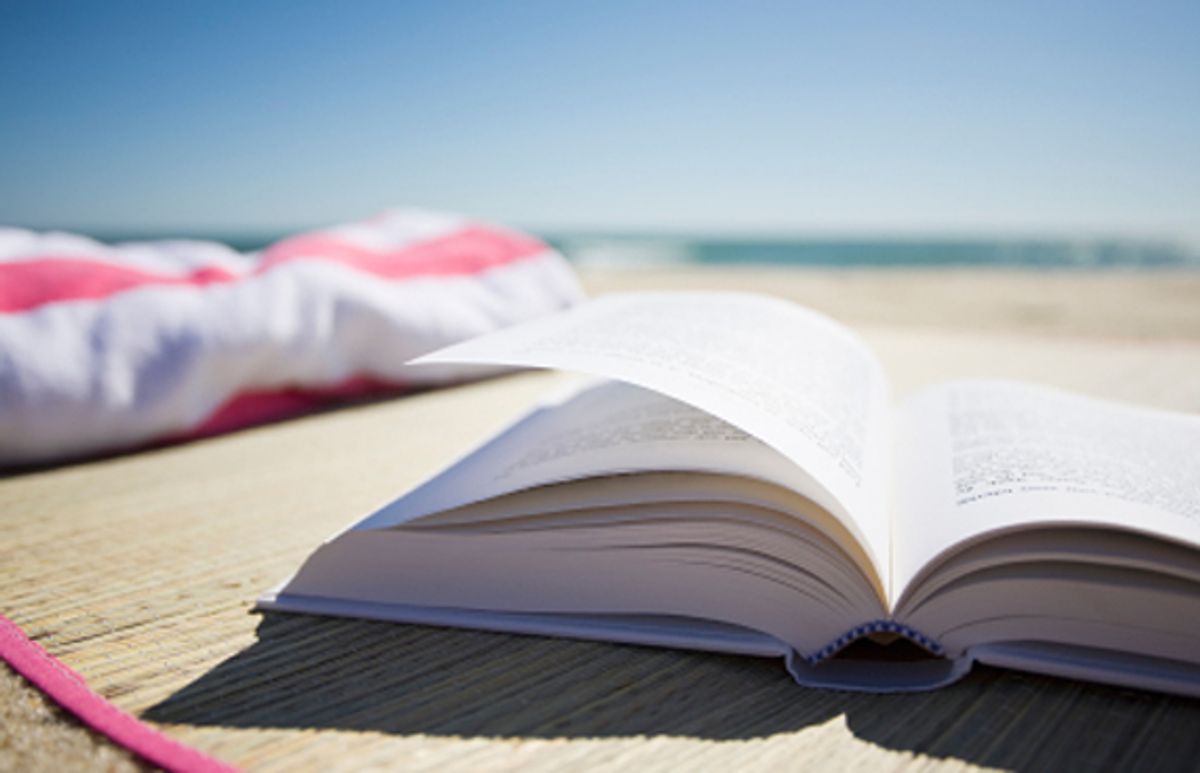 Summer's arrived, and that means you're probably getting ready to pack some choice crime fiction and thriller offerings into your bag or onto your e-reading device for that long-haul flight or scorching stay on the beach. But why not venture beyond the big names -- like Stieg Larsson, Janet Evanovich and Lee Childs -- this season, with some nail-biting books by underrated or emerging writers?

Here are seven great smart and thoroughly entertaining crime novels and thrillers to consider for your seasonal-reading pleasure. They'll transport you to exotic locations, help you travel back in history -- and, most important, take you far, far away from your days of multitasking at the office.

Nearly a decade has passed since Belfer made her literary thriller mark with "City of Light," a meaty historical mystery set in turn-of-20th-century Niagara Falls. "A Fierce Radiance" is similarly bursting with period detail, moving from tony Fifth Avenue townhouses to Greenwich Village cobblestones to late-night laboratory sessions at the Rockefeller Institute in World War II-era New York City. Belfer's focus this time is penicillin. The wonder drug came too late for Life photographer Claire Shipley's long-dead daughter but could be the springboard that will allow her love interest, James Stanton, to graduate from local experiments to leader of secret government projects. Their romance develops against the backdrop of a war that puts the United States on shaky ground, at least until the country recognizes the usefulness of medicine growing from green mold. "A Fierce Radiance" is a feast of storytelling wonders, mixing corporate greed, murder, espionage, fraying family ties and irresistible descriptions of old New York (not to mention a deliciously catty walk-on by playwright and congresswoman Clare Booth Luce) in a morality tale about one drug's power to save lives -- and how ordinary humans aren't necessarily equal to that daunting task.

At first it seems counterintuitive to read a thriller set in the thick of a snowstorm in the middle of nowhere during the summer, but what better way to create the illusion of escapism than to reverse weather course? The publication timing of Gerritsen's newest novel featuring Boston cop Jane Rizzoli and her friend (and city medical examiner) Maura Isles has more to do with the July 12 premiere of the TNT show (starring Angie Harmon as Rizzoli and Sasha Alexander as Isles), but "Ice Cold" works well as a series introduction. The normally staid, buttoned-up Isles -- nursing romantic difficulties with her boyfriend, who also happens to be a priest -- indulges in an impulse wilderness trip with an old high school acquaintance while playing hooky from a medical conference. The snow accumulates, stranding Isles & co., but Gerritsen has several more tricks up her sleeve, raising the suspense stakes with a secretive cult, home-brew surgery under the most appalling circumstances, and the possibility that Isles might not make it home. Gerritsen paces "Ice Cold" with surgical precision but doesn't neglect her main characters, even if Rizzoli's trademark fire doesn't kick in until the second half of the book.

Eisler's newest thriller probably doesn't qualify as escapist reading per se, not with a storyline revolving around missing torture tapes and a closing speech on corporatocracy that, frankly, comes off as a downer. But that's the point of "Inside Out" (also made in Michael Gruber's "The Good Son"): American politics, as relayed by the media, can only convey part of the story, and comes at the mercy of the agendas of competing government agencies, judicious leaks and public relations games. None of this is new (especially for readers of War Room or Glenn Greenwald), but Eisler, thankfully, packages them into a superior example of fast-moving entertainment.

Enter Ben Treven, the private security operative tasked with finding the missing torture tapes (all 92 of them, or perhaps even more) and prying them from the hands of a long-rogue colleague in secret tradecraft with a serious ax to grind against his superiors, and some serious secrets he himself needs to protect. Treven's task is ordered by a man who nearly had him killed. He's partnered with an FBI agent whose chain of command is hardly clean-cut, and as the chase continues, Eisler's mission becomes a search for uncorrupted American idealism.

Puzzle mysteries and John Dickson Carr, master of the locked-room novel, are hardly read nowadays. My pet theory about both is that sustaining an "impossible crime" (where explanations only make the murder look less solvable) is bloody difficult, so writers shy away when there are other, pressing matters like developing unforgettable characters and raising the stakes with each chapter. That's why John Verdon's debut novel -- which, at first, fixates on retired NYPD detective Dave Gurney's adjustment to civilian life (and a more intimate rapport with his understanding but impatient wife, Madeline) before things get hairy -- stands out: He's brought back crimes of impossibility, starting with the titular parlor game trifle and escalating until we're deep into serial murder territory. Verdon is a master at controlling pace, illustrating the story of a rich but complicated marriage, pondering what it means to be sucked back into your life's work even if it might kill you, and demanding that the reader use his or her brain to figure out what comes next. When you're finished, you may not trust silly parlor games ever again.

Everyone knows a girl like Alice Parrie. Pretty, popular, much sought-after, touched by glamour, and the more time you spend with her, the more that dull ache in the back of your head throbs as you realize something is just a little bit wrong with her. (Zooey Deschanel played this to perfection in last year's "500 Days of Summer.") But Katherine Patterson, new in town and trying to shake off a family tragedy she feels responsible for, doesn't notice the wrongness of Alice's attention at first. She has a new best friend, someone to trust and to share confidences with. So what if Alice treats her sort-of boyfriend, Robbie, with utter contempt? So what if Alice's world orbits only around Alice and anyone who steals that spotlight, however accidentally, will suffer as a result? With surgical precision, Australian author James draws us into the close-knit bosom of the teenage girls' developing friendship and with equal skill, fillets it to the bone. We know Katherine will survive, but the cost she bears for trusting the wrong person provokes years-long repercussions -- and signals the beginning of what should be a splendid career in suspense for Rebecca James.

"The Reapers Are the Angels" by Alden Bell (Aug. 3)

So you've read every last page of "The Passage," Justin Cronin's epic dystopian vampire tale, and need a horror fix to help you get through the wait for the sequel. May I present Alden Bell's gorgeously written and bloody tale, which mutates from a zombie story into something of beauty and meaning. Temple was born into a cruel world filled with the living dead, and wanders, looking for a place to rest and to stay safe. The frontier Bell describes in lush detail is one of perpetual danger -- and where flesh-eating beasts might be the least of Temple's problems and pursuers. Bell (a pseudonym for Josh Gaylord, author of the Manhattan prep school novel "Hummingbirds") clearly owes great literary debt to Cormac McCarthy's "The Road" and the Southern Gothic school of Faulkner and O'Connor, but "The Reapers Are the Angels" shows the reader that they need not settle for mere blood 'n' guts when horror tales can, and should, go many extra miles.

Finally, here's an exemplary pick from the "crime fiction introduces new worlds" front. Ferraris' 2008 first novel, "Finding Nouf," opened a window for Western readers into Saudi Arabia: a country modernized by technology and science but nowhere near so with respect to the treatment of women. That theme gets explored in more detail in "City of Veils" when the murder victim in question, a woman named Leila, turns out to be a documentary filmmaker exploring the secret desires and lives of young women. The investigation, conducted by a cop experiencing difficult marital troubles, also intersects with an American woman's struggle to stave off loneliness while her husband further embraces Saudi Arabian (and male-centric) mores. In a parallel struggle, Katya -- one of a handful of female forensic scientists in the Middle Eastern country -- asserts herself professionally while remaining marriage material for the right sort of husband. Tension is everywhere as Ferraris builds suspense from both domestic concerns or the grievous crime. As she describes it, Saudi Arabia isn't necessarily a country worth visiting, but, as her book makes clear, it's absolutely vital that Americans learn more about its people and their thoughts about the outside world.