Jindal and the right on oil spill: Shill, baby, shill! 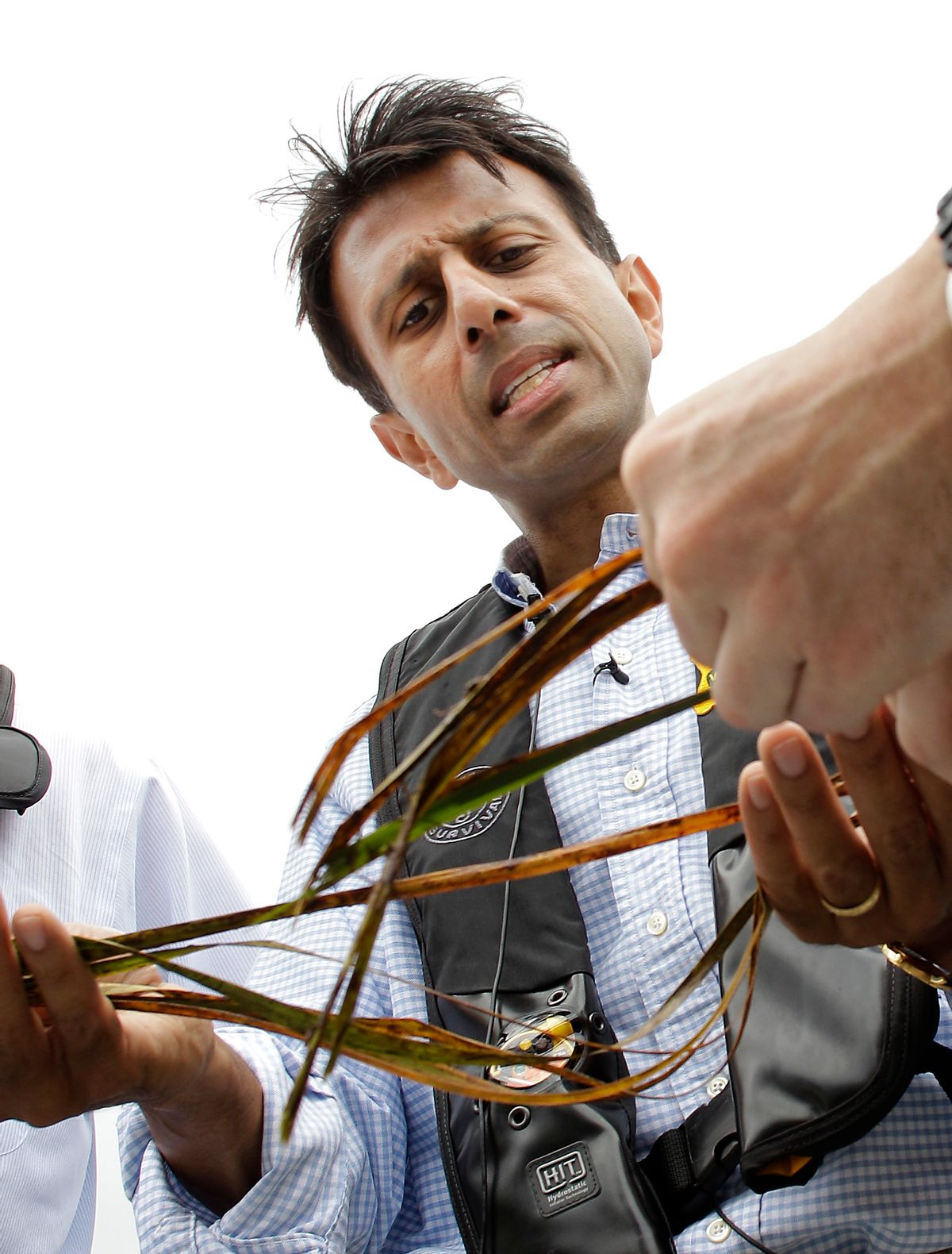 A stunning new letter by the oil-addicted governor of Louisiana gives the lie to right-wing claims that environmentalists are to blame for the BP oil disaster.

On Wednesday, Bobby Jindal, who blames everybody but himself for the environmental disaster hitting his state, wrote to President Obama and Interior Secretary Ken Salazar pleading with them to end the deep water drilling moratorium immediately.

He expresses "grave concerns" for the "economic impact of a six-month (or longer) suspension of activity" at 33 Gulf rigs -- "including and in particular the 22 deepwater drilling rigs currently in operation off the Louisiana coast." Jindal warns that the "announced moratorium of deepwater drilling activity creates a significant risk that many of these drilling platforms would be relocated to other countries -- along with the hundreds of high-paying jobs that they each create."

Jindal seems oblivious to the "significant risk" and potentially devastating economic impact posed by the drilling itself -- risk that will be present until we figure out all of the causes of the spill and how to make sure it never happens again.

I fully understand the need for strict oversight of deepwater drilling. However, I would ask that the federal government move quickly to ensure that all deepwater drilling is in proper compliance with federal regulation and is conducted safely....

Jindal omnisciently -- and mistakenly -- asserts here that current federal regulations are sufficient to avoid another blowout disaster. He has no way of knowing if this is true, whereas we have every reason to believe it is false.

Under the Cheney-Bush administration, efforts to strengthen regulation were blocked and the industry demanded and achieved essentially voluntary, "trust us" self-regulation and self-certification. For instance, when the Minerals Management Service considered requiring an acoustic backup system to shut off the blowout preventer in the event of a disaster, as Brazil and Norway require, lobbying by BP and other oil companies persuaded them not to.

The Wall Street Journal reported that "the safety record of U.S. offshore drilling compares unfavorably, in terms of deaths and serious accidents, to other major oil-producing countries. Over the past five years, an offshore oil worker in the U.S. was more than four times as likely to be killed than a worker in European waters, and 23% more likely to sustain an injury." A 2007 MMS study of 39 blowouts from 1992 to 2006 found, "Nearly all the blowouts examined occurred in the Gulf of Mexico." Big Oil clearly can't be trusted to regulate itself.

That's why some are calling this disaster "Cheney's Katrina." And that's why Obama set up a commission to figure out exactly why this disaster occurred. Until we know all the causes, we can't be sure we are taking every possible step to make sure it doesn't happen again. And that's why the president put in place the moratorium for six months, to wait until the findings from the commission are in. That's also why the president on Tuesday called the disaster a wakeup call that should lead us to once and for all end our addiction to oil.

Jindal has every right to be concerned about the economic impact on his state and region. But rather than recklessly open the Gulf to another potential disaster, the prudent thing would be to support a short-term economic support measure for the region. But that isn't the approach Big Oil wants to take.

In fact, some shameless industry shills and pro-pollution right-wingers have been spinning the most amazing argument about the origins of the spill.

First, Washington Post columnist Charles Krauthammer blamed the extreme deep-water drilling that led to the spill in part on those who care about the environment, "Environmental chic has driven us out there."

Sarah Palin posted a message to "extreme" environmentalists on her Facebook page:

"Extreme Enviros: Drill, Baby, Drill in ANWR – Now Do You Get It?":

Extreme deep water drilling is not the preferred choice to meet our country’s energy needs, but your protests and lawsuits and lies about onshore and shallow water drilling have locked up safer areas. It’s catching up with you. The tragic, unprecedented deep water Gulf oil spill proves it.

Yes, the recklessness of one of the world’s biggest oil company -- one that played a key role in the failed effort to protect her state after the Exxon Valdez disaster -- "proves" to Palin that we should let them all into a pristine national refuge.

But the larger point is that environmentalists aren't the reason we're drilling out in the deep water of the Gulf. If it were up to enviros, we wouldn't be drilling anywhere off the Gulf Coast. No, there are three reasons we are drilling in the dangerous deep waters of the Gulf: 1) industry assurances that new technology made oil disasters impossible and "inconceivable," as BP put it; 2) "Drill, baby, drill” demagoguing by anti-environment right-wingers; and 3) decades of opposition by conservatives to slash our dependence on oil, such as tougher fuel economy standards.

And the clearest evidence of that is Jindal's crazy call to quickly restart deep-water drilling now, even in the face of the environmental and economic devastation to his state from such drilling. What do they say about addicts? No matter what terrible thing happens as a consequence of their addiction, they still demand another fix.