Alaska may not be big enough for these two Republican rivals 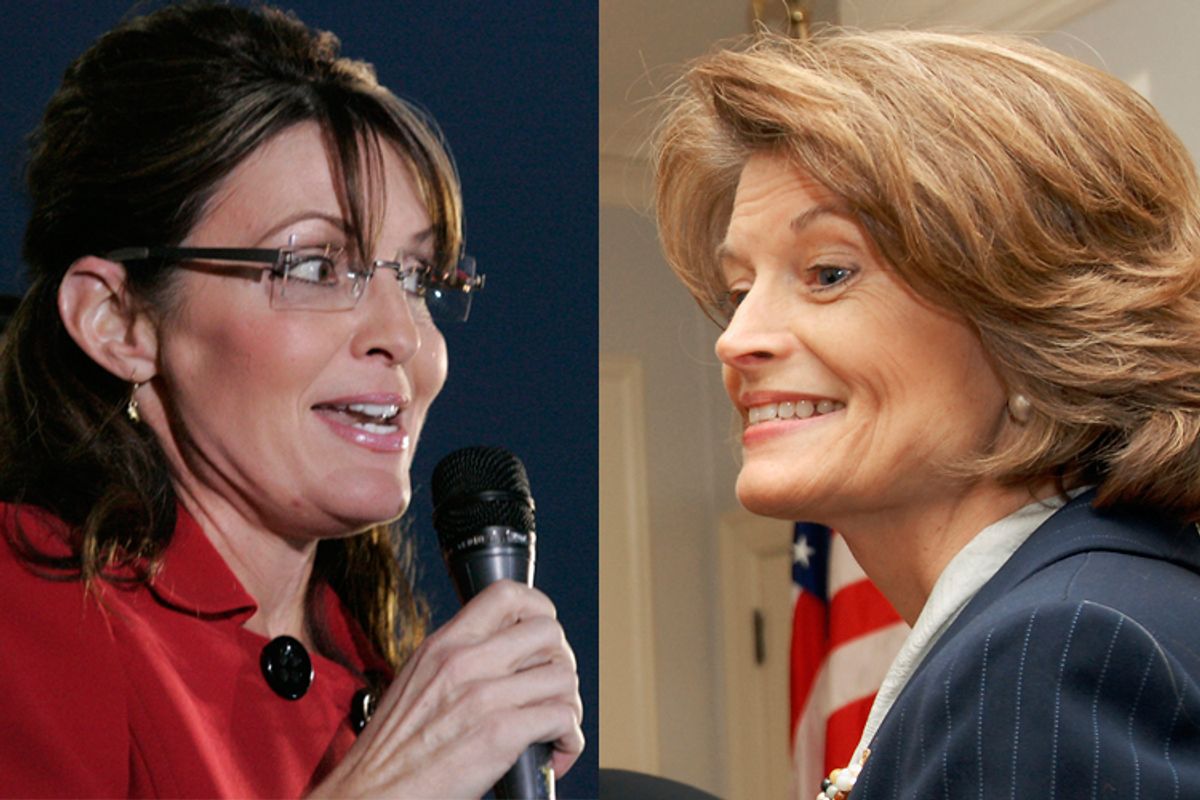 Sources with knowledge of the negotiations confirmed the hire but wanted to remain anonymous because the move hasn't been officially announced by Murkowski’s office.

Bitney was a close Palin confidant and one-time high school band mate. He is the political operative widely credited for turning the small-town mayor with a talent for retail politicking into a credible candidate for governor. Bitney would go on to be Palin’s legislative director before their relationship soured, badly. Bitney is well regarded in Alaska and Murkowski no doubt chose him for his skills, not merely to tweak Palin. Still, their alliance is just one more example of how former friends burned by Palin could cause trouble if she decides to seek the Republican nomination for president in 2012.

In 2007, Palin heaped praise on Bitney for the work he did as her legislative director during her successful first year-and-a-half in office, declaring at a post-legislative press conference, “Whatever you did, you did right.”

But their relationship quickly soured when she discovered that Bitney was having an affair with the wife of a family friend -- a woman he would go onto marry -- and Palin ordered her chief of staff to fire Bitney. He only learned of his dismissal when his state-issued BlackBerry, key card and e-mail account stopped working.

In her memoir, "Going Rogue," Palin refuses to even use Bitney’s name, instead referring to him as a "BlackBerry games addict who couldn’t seem to keep his lunch off his tie."

Lawmakers still praise Bitney for his close working relationship with them during one of the most prosperous times in Alaska’s legislative history, which catapulted Palin into being one of the nation’s most popular governors. That popularity helped put her on John McCain’s radar screen.

Andrew Halcro, a third-party candidate in the 2006 campaign, had an up-close look at how Bitney helped Palin get elected. Debating Palin and Democratic candidate Tony Knowles around the state, Halcro says he was always impressed with how hardworking and loyal Bitney was.

“I saw him in the role of counselor and as an educator. John used his policy experience and years in the legislature to guide her through some of the debates and some of the on-the-ground work.” Halcro, now a vocal Palin critic, added, “Bitney was always in tow.”

Her caricature of Bitney as an incompetent slob is foreign to Republicans and Democrats who have worked with him in Alaska.

After "Going Rogue" hit the shelves, Bitney tried to defend himself, saying, "It’s fiction and she’s just being mean."

Bitney is currently the chief of staff for former Alaska House speaker and current state Rep.  John Harris, who is running in the 2010 Republican gubernatorial primary. When Harris first hired Bitney, Todd Palin called Harris to express his disapproval.

Murkowski’s hiring of Bitney may be construed as further evidence of her own sour relationship with Palin. Though Palin and Lisa Murkowski express nothing but respect for one another in public pronouncements, the relationship has clearly been uneasy at the very least.

In 2002, when Sen. Frank Murkowski became governor of Alaska, Palin was in the running to be appointed to replace him in the United States Senate. Instead, Murkowski chose his daughter, Lisa, for the seat and appointed Palin to an $118,000 a year job with the Alaska Oil and Gas Commission. In 2004, when Lisa Murkowski ran for her first full term, Palin considered running against her, but citing her son Track’s desire to be away from the public spotlight, she decided against it. Palin backed Murkowski’s primary opponent, Mike Miller.

In 2006, when Palin won the governorship it was by defeating Murkowski’s father, Frank. There was even an uncomfortable moment at election night festivities when Palin loyalists began to taunt the soon-to-be-former Gov. Murkowski. Lisa Murkowski actually confronted the group, pleading, "Could you have some dignity for my dad?"

Two years later, while on the vice-presidential campaign trail, Palin blasted Frank Murkowski for being part of "the old boys network," which she defeated, and told voters that she had put the former governor’s "plane on eBay."

When Palin announced her resignation from the governorship in July of 2009, Murkowski did not join the long list of Republicans who publicly supported the decision. Instead, she issued a curt public statement that seemed to say it all. “I am deeply disappointed that the Governor has decided to abandon the State and her constituents before her term has concluded.”

"It does us no good to incite fear in people by saying that there's these end-of-life provisions, these death panels," Murkowski said, according to the Anchorage Daily News. "Quite honestly, I'm so offended at that terminology because it absolutely isn't (in the bill). There is no reason to gin up fear in the American public by saying things that are not included in the bill."

Murkowski doesn’t yet have any challengers, and Alaska political observers suggested that she has become the most powerful female politician in the state.

"I don’t think Lisa Murkowski’s worried about Sarah Palin. She knows she’s the No. 1 woman in Alaska," Michael Carey, a columnist for the Anchorage Daily News, said.

According to Andrew Halcro, Bitney is just one more name in a long list of former Palin allies turned bitter enemies.

"He had been such a loyal foot soldier, so dedicated to that campaign," Halcro said. "But that’s Sarah when she’s done with you, she's done with you. She doesn’t just burn the bridge, she chops it up in little pieces and torches it."

Shushannah Walshe is the co-author of "Sarah From Alaska: The Sudden Rise and Brutal Education of a New Conservative Superstar" with Scott Conroy. Reporting from the book was used in this piece.

Shushannah Walshe is the co-author of "Sarah From Alaska: The Sudden Rise and Brutal Education of a New Conservative Superstar" with Scott Conroy. She was a reporter and producer at the Fox News Channel from August 2001 until the end of the 2008 presidential campaign.