No, this isn't "Watergate" (and never will be)

Republicans have fantasized about a Democratic "Watergate" for decades. Can they still remember the real thing? 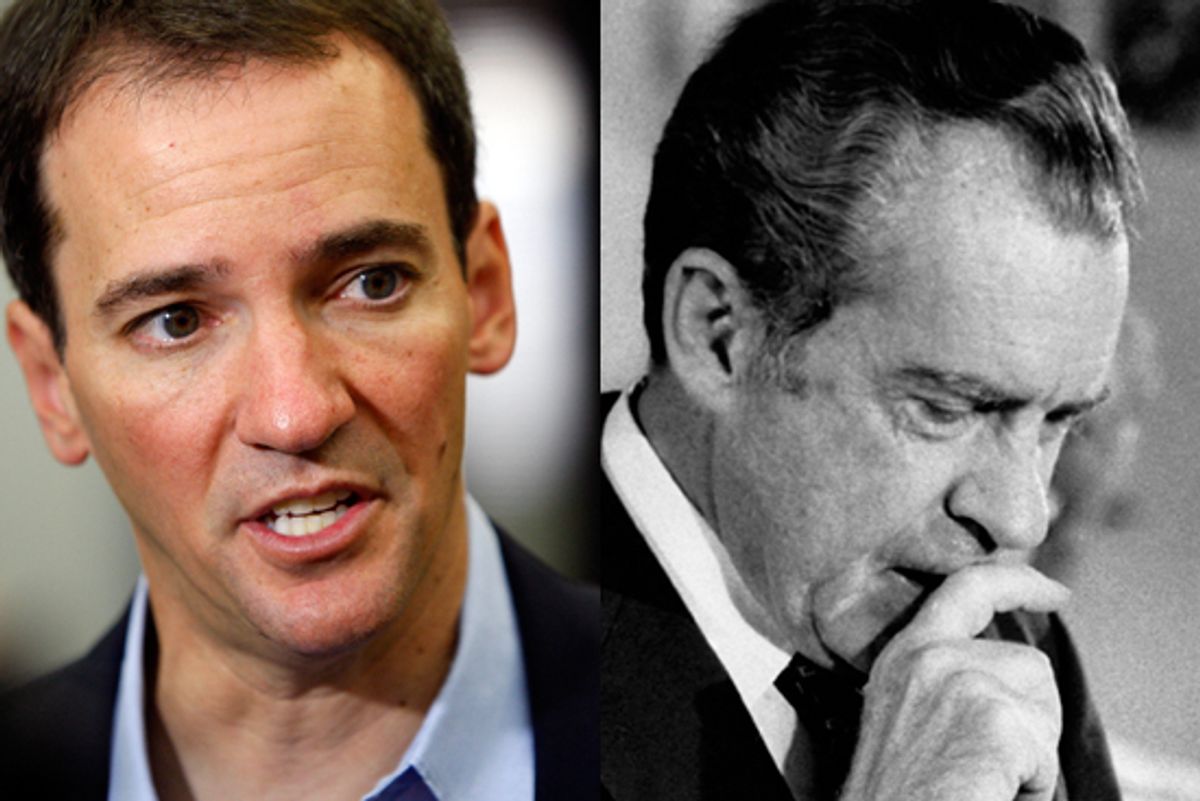 The quest for a Democratic Watergate that has preoccupied Republicans for more than three decades may never achieve fulfillment but surely will never end. Impeaching Bill Clinton promised satisfaction only to bring deeper frustration -- which must be one of the many reasons that we now hear politicians and pundits announcing the arrival of " Obama's Watergate" (and also why they never say " Obama's Whitewater" ).

So far, the alleged scandal that supposedly threatens the Obama presidency doesn't amount to much: a verbal mention of a nonpaying advisory post to Rep. Joe Sestak in a conversation with Clinton, and an e-mail mentioning three administration jobs to Andrew Romanoff, the Democratic speaker of the Colorado state assembly, dangled in order to dissuade them from entering primaries against incumbents favored by the president.

If clumsiness were an indictable offense, then the White House officials responsible for those overtures might well be in trouble. But when people compare such ham-handed deal-making with the crimes of Watergate, it can only mean that they don't remember what the country and the Constitution endured under Nixon -- or that they cynically assume nobody else does.

Some of us do, however. And for those who don't, or who never learned the true history of the Nixon era in high school or college, there are several gripping books, including  "The Wars of Watergate" by  Stanley Kutler, "Nightmare: The Underside of the Nixon Years" by the late  Tony Lukas, and of course Bob Woodward and Carl Bernstein's classic "All the President's Men." (The latter is also the title of a wonderful movie that outlines the conspiracy but necessarily omits most of the grim details.)

" Watergate" was the place where the president's henchmen staged a "third-rate burglary" of the Democratic National Committee headquarters on a June night in 1972, but its historical definition is the vast gangsterism of the Nixon regime. Watergate involved no political job offers, but a series of burglaries, warrantless domestic wiretaps, illegal spying, campaign dirty tricks, and assorted acts of thuggery by a group of goons whose leaders included G. Gordon Liddy and the late E. Howard Hunt. Watergate meant a coverup of those felonies with more felonies, set up by lawyers and bureaucrats who collected cash payoffs from major corporations and then handed out hush money and secret campaign slush funds. Watergate implicated dozens of perps, from Hunt and Liddy all the way up to the president, his palace guard, and his crooked minions at the highest levels of the Justice Department, the FBI and the CIA.

Plenty of Watergate experts can be summoned to evaluate the current comparisons with the Sestak/Romanoff brouhaha -- not just superb historians like Kutler and Robert Dallek or celebrated journalists like Woodward, Bernstein and Seymour Hersh, but the surviving veterans of the Nixon regime itself, from Henry Kissinger, Pat Buchanan and Roger Ailes on down to Lucianne Goldberg and Chuck Colson. If they are anywhere near as honest as the  redeemed John Dean, they'd have to laugh at any suggested resemblance between the felonious wilding of the Nixon era and the tame wheeling and dealing of Rahm Emanuel.

So perhaps the time has come to amend or extend Godwin's Law: The first to cry " Watergate" loses the argument.