GLAAD is up in arms over his comments about a McDonald's campaign. Did they miss the point? 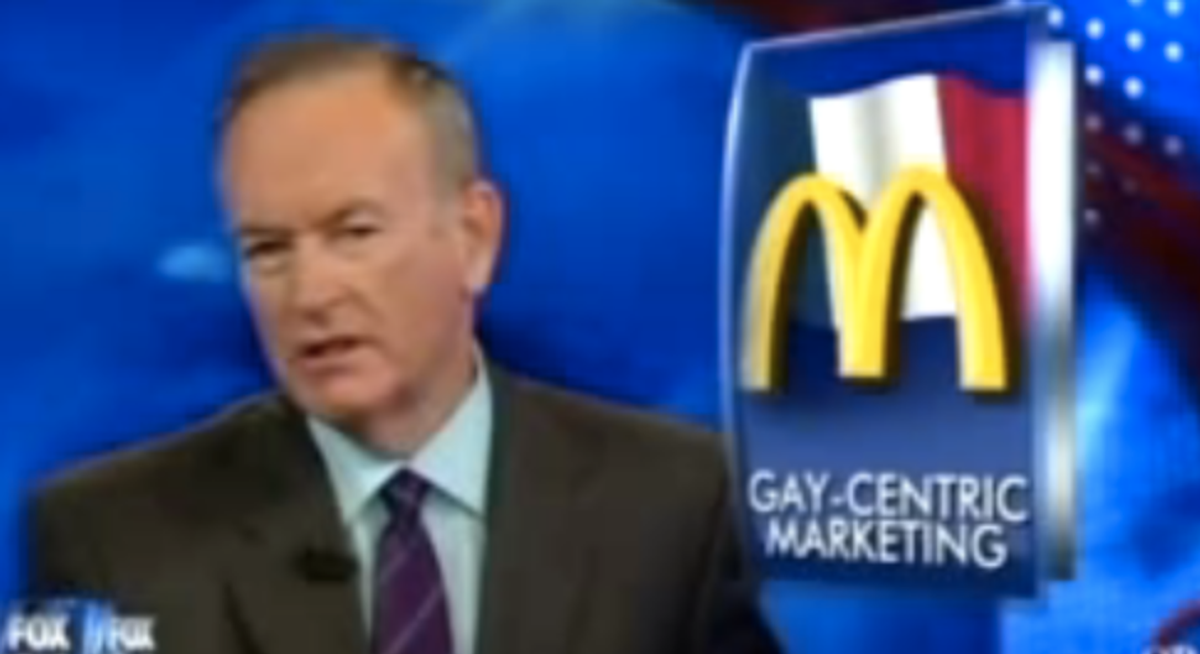 Just because Bill O'Reilly is a big-mouthed, sexist dope doesn't mean he thinks gays are terrorists. Yet from the indignation his latest foray into inappropriate metaphor has caused, you might think the two were synonymous in his mind.

The subject of O'Reilly's diplomacy fail this time is a popular new French McDonald's ad, wherein a teenage boy is talking on his cellphone while gazing longingly at his class picture. O l'amour! He murmurs to his unseen beloved, "I miss you too." Then dad shows up with a few orders of frites, reminisces about his own days as a suave ladies' man, and, as his son smiles wryly, notes it's a shame his son's class is all boys. The tagline? "Come as you are." It's a sweetly low-key and surprisingly touching spot, one that plays with the bittersweet joy of a first, secret love, and with our expectations of the conversation that kid and his dad are about to have over a few nuggets.

Obviously, these people are the enemies of freedom.

Or so, apparently, Bill O'Reilly would have you believe. On a June 2 segment of his show, O'Reilly showed the clip and incredulously asked, "Does that make you want to buy a Big Mac? … I don't know why they're doing it." After shrugging that the ad would never air in the States, O'Reilly then went in for the kill, deriding the whole long-running "Come as you are" campaign. "Do they have an al-Qaida ad?" he asked. "You know, 'Come as you are' — boom."

Faster than you can say "Pride Month," GLAAD issued a "call to action" and demanded an apology for the remarks, saying, "O’Reilly used the occasion to defame the LGBT community, suggesting that McDonald’s might begin marketing to terrorists simply because the company produced a gay friendly television commercial."

Wait? Is that what he did?

Watching the full clip, it doesn't sound like he's comparing gay people to al-Qaida at all — it sounds like he's being cynical about the hubris behind a marketing strategy. And O'Reilly actually has a point when he questions the effectiveness of the spot to move burgers — I was thoroughly charmed by it, and I'd still rather put a Glock in my mouth than a Quarter Pounder.

It seems fair to say that enjoying a McFlurry and coming out to your dad have nothing to do with each other. Advertising campaigns aren't always literal, "Mmmm, Quarter Pounder, so delicious!" affairs, of course. Sometimes they're a brand's way of just saying, "We're accessible. We're likable. We're not assholes." In that regard, the new spot may be wildly successful in drawing consumers in — it depicts the Golden Arches not as a bustling hellhole but a sanctuary where memories are made. But is that, as they say on Fox, fair and accurate? That seems to be what O'Reilly was clumsily getting at — questioning a corporation's motives in promoting itself as so very special and inclusive.

O'Reilly historically doesn't have the openest of minds or the subtlest grip on metaphors. This is, after all a guy who just a few weeks ago brought the notion of dressing up like an Ewok into a conversation on transgenderism. If there's any face palming to be done for his reliably blowhard tactics and ridiculous faux outrage, I'm right there. But that doesn't make his recent comments, in the words of GLAAD, "anti-gay defamation." The "defaming," in this case, was aimed at McDonald's. And what gay rights organizations are calling "insulting and irresponsible" looks from here like run-of-the-mill stupidity.