"Get Him to the Greek": '30s screwball bromance

Russell Brand and Jonah Hill are terrific in this raunchy rock-god farce with a sublimely weird cameo: Paul Krugman 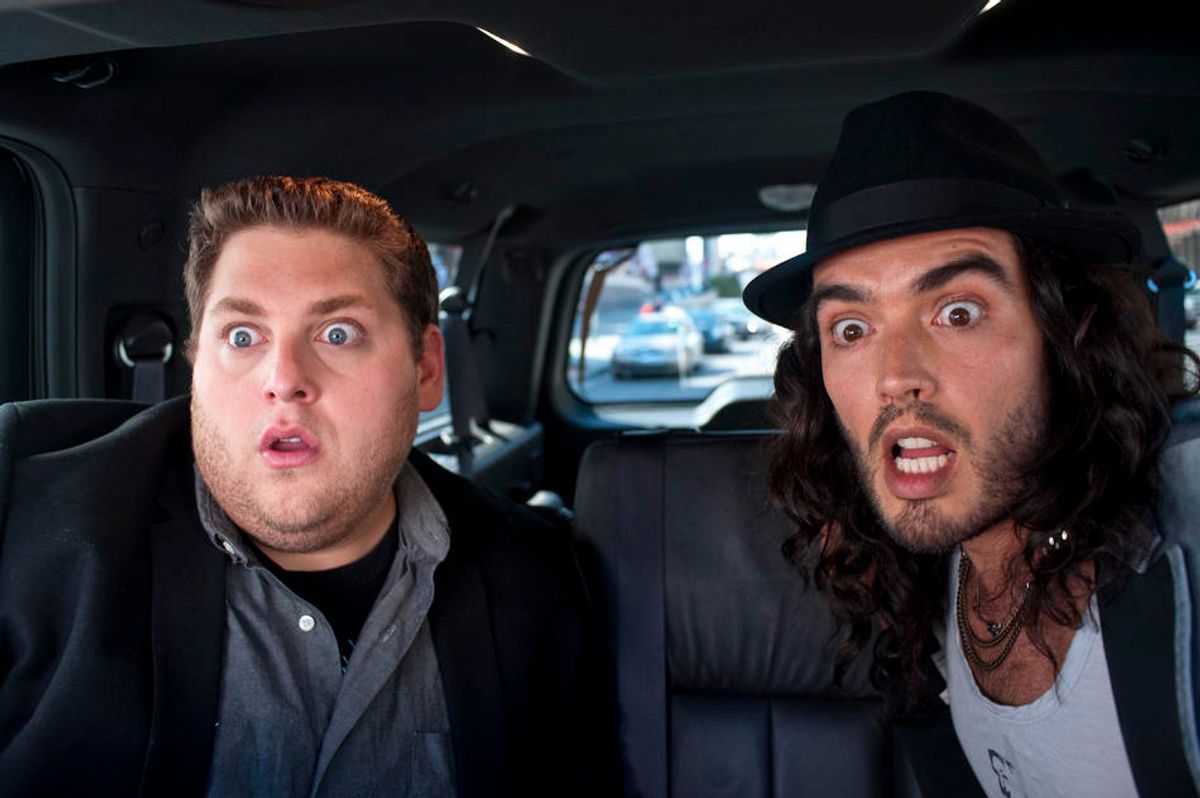 Jonah Hill and Russell Brand in "Get Him to the Greek"
--

You could sketch out the story of "Get Him to the Greek" on the back of a cocktail napkin -- that's probably how it was written in the first place -- and you'd get most of it right. Take a preening English rock star on the down slope of a once-huge career and a shlubby American talent agent trying to make his bones. Give them 36 hours to get from London to New York to a concert at L.A.'s Greek Theater. Interrupt as necessary with booze, drugs, trashy nightclubs, unscheduled visits to Vegas and floozies of various nationalities. Give the agent a hard-ass boss with the affect and personality of Sean "P. Diddy" Combs. OK, make it be Sean Combs.

Then add the celebrity cameos required by all zany comedies these days: Say, Meredith Vieira, Lars Ulrich, Paul Krugman. Wait -- hello? I must have had too many myself; for a second I thought you said "Paul Krugman." No, it's true. The Nobel-winning economist and New York Times columnist appears in writer-director Nicholas Stoller's dudealicious comedy, conversing with vomit-streaked talent agent Aaron Green (Jonah Hill) in the green room of the "Today" show. "My dad really loves your shit," Aaron assures him.

Krugman's presence goes some distance toward illustrating the oddness of this Judd Apatow-produced wannabe summer hit, which blends healthy doses of debauchery and potty-mouth humor into a sweet-tempered, absurdist road yarn. In its better patches, "Get Him to the Greek" is closer to '30s screwball comedy than to stereotypical balls-out guy-farce. Granted, I don't remember any films by Ernst Lubitsch or Preston Sturges that involved splashy toilet-cubicle sex scenes, or gags involving someone stashing a balloon full of heroin in his "bottom-hole," to use the delicious phrase of rock god Aldous Snow (Russell Brand), a character first seen as the title character's boyfriend in Stoller's debut film, "Forgetting Sarah Marshall." But ask yourself honestly: If jokes like that had been conceivable back then, wouldn't Sturges have used them?

OK, that line of inquiry gets us nowhere. What I'm reaching for is the idea that "Get Him to the Greek" is an uneven but surprising movie, often outrageously funny and just as often completely flat. It almost works better as a dramatic bromance than as a comedy, thanks to the wonderful chemistry between Brand, a feline, intelligent English comedian who's still in search of American stardom, and Hill, a rotund Yank with a strangely powerful screen presence. (Hill is sneaking up on stardom himself; he's also terrific as Marisa Tomei's sinister adult son in the Duplass brothers' forthcoming comedy, "Cyrus.")

A nebbishy bottom-dweller in the L.A. talent agency presided over by tyrannical Sergio Roma (nice work by Combs -- and no, I don't know why his character has an Italian name), Hill's Aaron comes up with one big idea. He wants to drag one-time rock idol Aldous Snow out of quasi-retirement for the 10-year anniversary of his 1999 Greek Theater show, and turn the spectacle into a social-media phenomenon, streamed on Facebook, broadcast on HBO, and so on. Even grumpy Sergio agrees this appeal to arena-rock insta-nostalgia might become a huge cash cow, but Snow is lost in a London drug haze, following his disastrous venture into third-world compassion with an album called "African Child" and the implosion of his relationship with a pornographic pop-dance strumpet named Jackie Q (Rose Byrne, very funny).

Here's the thing about "Get Him to the Greek": The setup isn't especially interesting or original, but the movie gets better as it goes through its paces. At first blush, Aldous seems like a moronic Brit-rocker in the Spinal Tap vein, and Aaron like a clueless nerd who's out of his depth around cooler people. It's almost as if Stoller's screenplay is at war with itself, or with his directorial instincts, because both guys wind up being more complicated than that.

Aldous is vain, deluded, pretentious and probably chronically depressed, but definitely not stupid. Brand plays him as a self-centered Londoner from a lower-middle-class background, with a laconic drawl and an autodidact's intelligence, more like a 30-years-younger Mick Jagger than like any contemporary rock star I can think of. When Aaron tells Aldous the truth about the hideousness of "African Child," Aldous responds carefully: "I respect your honesty. But the content of what you say makes me hate you. So there's a layer of respect, but under that, hate." Yes, Aldous wants Aaron to transport narcotics in his bottom-hole and join him in all-night sessions of soulless debauchery, but in his not-so-hidden heart, he's also cravenly grateful for a friend who doesn't bullshit him all the time.

As for Aaron, he may lack worldly confidence and anything approaching adult judgment, but he's a resourceful, irrepressible guy, happy to talk to Krugman and Vieira while wearing a jacket streaked with yellow clumps of barf. When Sergio taunts him about being easily manipulated -- "I'm mind-fucking you right now. Can you feel my dick fucking your mind?" -- Aaron tries to develop a line of swagger appropriate to the occasion: "I hope you're wearing a condom, 'cause I've got a dirty mind."

Add in a whole roster of convincingly terrible Aldous Snow and Jackie Q musical numbers, gags about Cher and string cheese and "The Biggest Loser," and a terrific supporting cast that features a lovely performance from Elisabeth Moss (that's Peggy Olsen from "Mad Men") as the baffled medical-intern girlfriend Aaron leaves behind in L.A., and you end up with an awkward, intermittently hilarious and mostly enjoyable mishmash. (Yes, it's another Apatow-produced film in which a pudgy guy has a cute girlfriend, although the relationship here is at least moderately plausible.) A huge hit? Probably not. But however many shots of absinthe it took to get Paul Krugman to play along, he doesn't need to feel bad about it in the morning.

Get Him To The Greek Movies Paul Krugman