From the Gores to Fran Drescher, some celeb breakups remind us that love is rarely forever -- and that's just fine 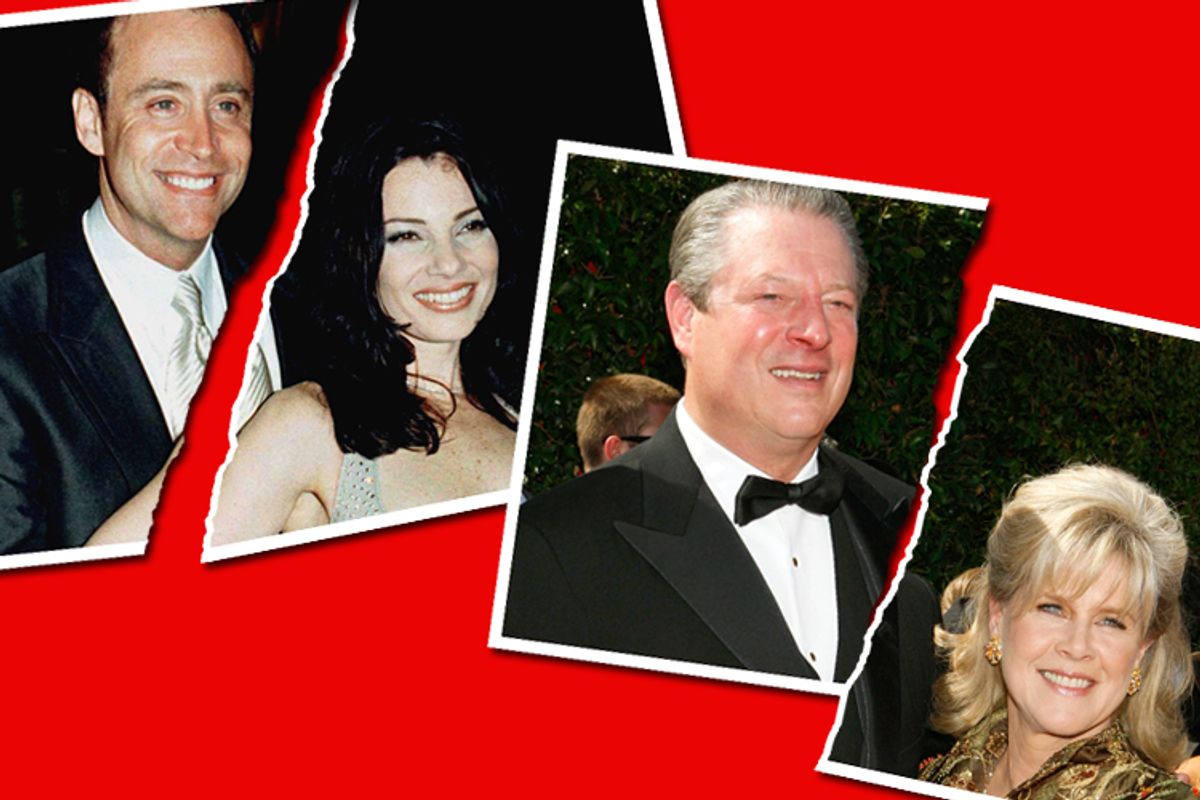 Whatever your definition of a successful marriage, events this week should lay to rest the notion that its chief attribute is duration.

First, Al and Tipper Gore announced their separation after a formidable 40 years together, setting off waves of public mourning and a spate of speculation regarding the motivation. Then, "Nanny" star Fran Drescher revealed that her ex, with whom she put in 21 years of marriage before splitting in 1999, is gay. And for the kicker, Sean Penn, whose 14-year marriage to Robin Wright Penn is currently pending divorce, stated in Vanity Fair that his former mate and the mother of his children "is a ghost to me now."

While all three relationships — and the issues that broke them up — were surely very different, what they all shared was their public veneer of permanence. Because despite the pervasiveness of divorce most of us still go to weddings — including our own — assuming the "death till you part" clause will stick. And considering that divorce rates are considerably higher in the first 10 years of marriage, it's little wonder that we tend to view couples who make it to the decade mark as being out of the danger zone.

In a world where you have to update your goddamn software settings every week, it's consoling to believe that certain things are forever — even if that thing is other people's relationships. But life is nothing but a series of evolutions, and nobody remains frozen in white gowns and tuxes for eternity. You're not the same person you were all those years ago (as those Facebook pictures of your college-era hairstyle follies should make abundantly clear), so why would the most intimate relationship of your life not change as well? And why would anyone assume that the act of sticking it out is in and of itself a triumph?

Just because two people are perfect for each other when they're 25 doesn't mean they're meant to be together when they're 45. The knowledge of that doesn't make the reality easy to accept; it doesn't mute the pain of loss. When Penn speaks of his estranged wife as "a ghost," he's not bragging that he's over it; he's acknowledging the passing of something important from one state to another, and the sorrow that can bring. "We spent all those years together," he says. "Now she's just gone."

But while endings are often anguished, that doesn't always make them bad. Author Dan Kennedy bemoaned this week that "unless your spouse drinks nightly with their hand on a gun, why do you get divorced at age 62 after 40 years together?" But what I find sad is the notion that once you've invested a certain amount of time in anything — a field of study, a job, a relationship — the noble course is to grit your teeth and see it through until, presumably, you die. Breakups suck, but if you've ever been in a dying relationship, you know that the exhausting agony of keeping up appearances is no great shakes either.

When two people can grow and change and love each other through the whole sticky mess of living, of course that's worth celebrating. If that involves sexual compatibility and shared values and agreeing on how to hang the toilet paper, fantastic. Enduring relationships aren't impossible. But whether they're platonic or familial or romantic, the successful ones are the ones that keep moving forward, wherever the road may lead. That might involve, as appears to have happened with the Gores, "a mutual and mutually supportive decision" to come to a respectful parting of ways. In the case of Fran Drescher and ex-husband Peter Marc Jacobson, the reasons for ending the union are pretty obvious. (It's how they lasted as long as they did that's the head scratcher.) What makes their story, unusual as it is, inspiring is Drescher's assertion 11 years later that they're now "the best of friends. We love each other dearly."

So while it's understandable to feel a degree of contact grief for couples who never reach those ruby or diamond milestones, it's worthwhile to consider the alternative. Life rarely gives us forever. And if instead it hands us 10 or 20 or 40 good years with a good person, that's not a failure. That's worth a cake and a party too. When it comes to love, steadfastness is a virtue, but sometimes, so is letting go. And an honest divorce sounds a whole lot healthier than an unhappy marriage.