It's the occupation, stupid

Israel's attack on a humanitarian flotilla deserves condemnation. But let's understand the root of the problem 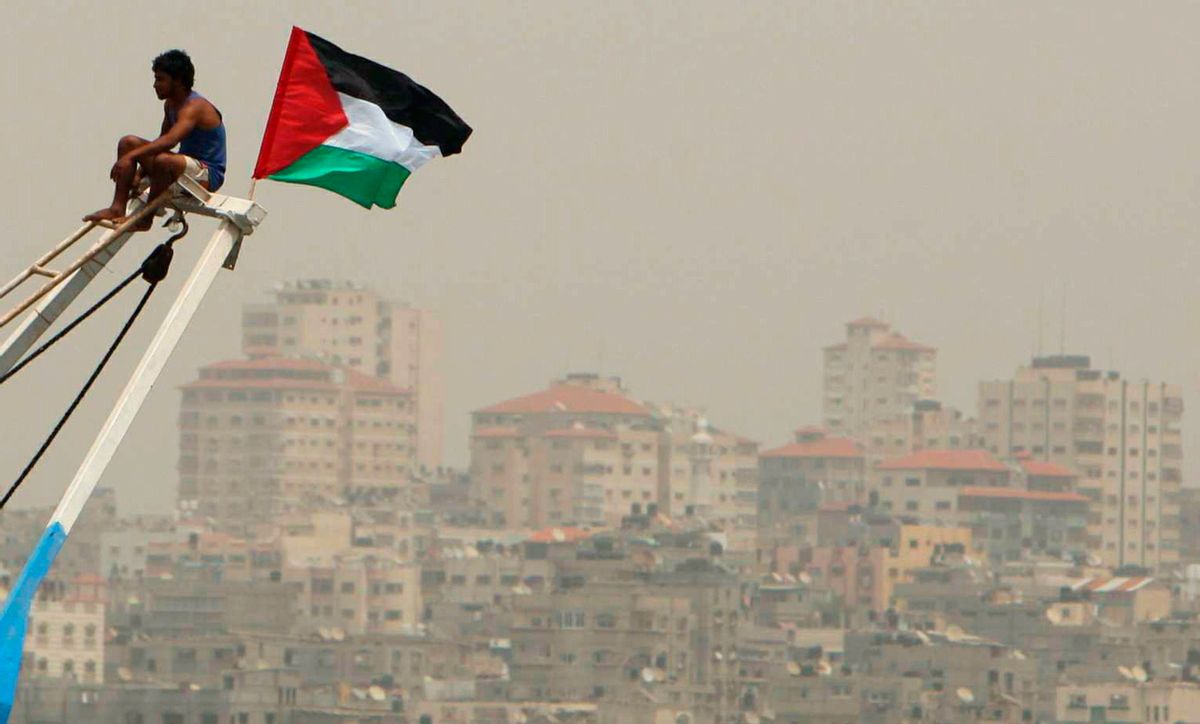 A Palestinian rides a boat during a protest at the Gaza Seaport against Israel's interception of of Gaza-bound ships, June 3, 2010. Israel, deflecting a U.N. demand for an international investigation, proposed on Thursday an Israeli inquiry with the participation of outside observers into its lethal seizure of a Gaza-bound Turkish ship. REUTERS/Mohammed Salem (GAZA - Tags: POLITICS CIVIL UNREST) (Reuters)
--

With its deadly commando raid on a Gaza-bound humanitarian flotilla that left nine civilians dead and dozens injured, Israel once again resembles a self-destructive Goliath to much of the world.

Predictably, though, American pundits seem distracted by Israel's double-talk and moral justifications and intent on reducing this latest episode to a question of who threw the first punch on the ship. Instead, we should analyze the tragedy as a recurring symptom of Israel’s brutal 43-year occupation of Palestinian territories, which has had grave consequences for the security of Israel, Palestine and the United States.

America's ideological, financial and military support of Israel’s occupation is "untenable."  It erodes international solidarity, leads to cultural isolation, and further engenders anger and mistrust among Muslim communities around the world.

Since 1967, Israel has, in violation of international law, occupied the West Bank, Gaza, East Jerusalem and the Golan Heights, all the result of its "Six-Day War" against Arab nations (a conflict launched by an Israeli preemptive strike against Egypt). Following that war, the United Nations immediately passed Security Council Resolution 242, which called for "the establishment of a just and lasting peace in the Middle East" and the "withdrawal of Israeli armed forces from territories occupied in the recent [1967] conflict."

But today, 43 years later, nearly 500,000 Israeli settlers reside in occupied Palestine, 300,000 of them in the West Bank -- all of this in direct violation of the Geneva Convention, the European Union and the United Nations.

The 4 million Palestinians who live on these lands exist in squalid, occupied environments. Desmond Tutu, one of the leading opponents of apartheid in South Africa, said Palestine "reminded me of what happened to us black people in South Africa." He further warned, "[Israel would] never get true security and safety through oppressing another people."

Jimmy Carter has described this as "a system of apartheid, with two peoples occupying the same land but completely separated from each other, with Israelis totally dominant and suppressing violence by depriving Palestinians of their basic human rights."

As Israel and the United States make excuses and as the impotent international community fails to budge them, Palestinians languish without self-determination and statehood. Their daily existence is paralyzed by roadblocks, humiliating checkpoints, a non-functioning economy, extrajudicial killings, and a 403-mile wall through and around the West Bank -- which effectively imprisons West Bank Palestinians while allowing Israel to further annex large swaths of Palestinian land.

Despite empathizing with the "humiliation" of the Palestinian people and condemning the settlement expansion as "illegal," President Obama recently pledged a record-breaking $3 billion of military aid to Israel.

Citing "shared democratic values" and "shared strategic vision in the Middle East," the U.S. has guaranteed Israel a "qualitative military dominance" over its Middle East neighbors since 1967. Israel is the largest annual recipient of direct U.S. economic and military assistance since 1976 and the largest total recipient since World War II.

The militarized occupation of Palestine is made possible by the use and abuse of U.S.-manufactured and -sold Apache helicopters, F-16 jets, missiles and tanks. U.S. Annual Foreign Military Financing (FMF) grants to Israel represent 18.2 percent of the overall Israeli Defense budget and Israel conveniently uses almost 75 percent of these funds to purchase U.S. defense equipment. In fact, Israel purchases nearly $7.2 billion in weapons and military equipment annually from the U.S. and is, unsurprisingly, the world’s largest U.S. arms importer. Not coincidentally, Israel is also largest fleet owner of F-16 jets -- second only to the United States

Politically, the United States has abused its influential veto power to prevent 42 U.N. resolutions that condemned or severely criticized actions undertaken by Israel. By shielding a reckless ally that contravenes international law, the U.S. myopically sacrifices its own international reputation and security.

This pattern was evident in the summer of 2006, when Israel tried to invade southern Lebanon. Israel killed nearly 1,100 people, displaced 1 million Lebanese, and thoroughly damaged civilian infrastructure. Comparatively, 121 Israeli soldiers died in the conflict and 43 Israeli civilians were killed by Hezbollah rockets.

Furthermore, commentators who relied on the kidnapped soldiers to justify the 2006 invasion ignored Israel’s 1982 invasion of Lebanon, which left nearly 40,000 dead and led to Israel’s calamitous 18-year military presence in southern Lebanon -- an occupation that helped give rise to Hezbollah.

The backdrop for this week's humanitarian flotilla was Israel’s three-year naval blockade of Gaza, which began after Israel's "unilateral disengagement" from the territory in 2005. Of course, Israel never really left and the blockade, which is supported by Egypt’s construction of an underground wall closing its Gaza border, has transformed one of the world’s most densely populated regions into an "open air prison" where civilians, especially children, face a horrific humanitarian crisis. "Israel's continuing blockade of the Gaza Strip, a measure that is depriving its population of food, fuel and basic services, constitutes a form of collective punishment in violation of article 33 of the Fourth Geneva Convention," Human Rights Watch has decreed.

Never one to be deterred by reality, Avigdor Lieberman, Israel's hard-right foreign minister, recently reiterated "there is no humanitarian crisis in Gaza.”

Although Israel claims the blockade is necessary to minimize terrorist violence perpetrated by Hamas, many international observers suggest that Israeli policy itself exacerbates extremism and further erodes humanitarian conditions. “We're not helping the people and isolating the extremists," Tony Blair has said. "We're in danger of doing it the wrong way round ... I've been saying that for the best part of two years that this [the blockade] is a policy that doesn't work ... At the present time it's very hard to get materials into Gaza. We need to get not just humanitarian materials but materials that can rebuild the infrastructure.”

The Gaza situation grew even worse in January 2009, when Israel broke a cease-fire agreement with Hamas and launched Operation Cast Lead, a brutal three-week bombardment that left 1,400 Palestinians and 14 Israelis dead.

An independent investigation led by respected Judge Richard Goldstone, a South African Jew and self-described Zionist, stated that both Israel and Hamas had violated international law, with the latter firing rockets near Israel's civilian population. But the report laid much of the blame on Israel, concluding that it committed war crimes and, in some cases, crimes against humanity. The report specified that Israel employed "the application of disproportionate force and the causing of great damage and destruction to civilian property and infrastructure, and suffering to civilian populations."

Predictably, the report was savaged by the Israeli and American governments, with the U.S. House shamefully passing a resolution denouncing the meticulous report by a 344-36 margin.  (The rest of the world isn't nearly as gullible when it comes to Israel's self-defense claims. In 2003, a European poll named Israel the biggest threat to world peace, and a 2008 survey found that Israel was viewed as the biggest obstacle to achieving peace in its conflict with the Palestinians. In a written memo, U.S. Gen. David Petraeus recently suggested Israel is a threat to U.S. security, citing "the enduring hostilities between Israel and some of its neighbors" as "impediments to U.S. interests in the region." Petraeus also wrote that "Arab anger over the Palestinian question" undermines U.S. relationships with "peoples and governments in the Middle East."

It was the blockade of Gaza that prompted this week's humanitarian relief effort. Following Israel's deadly raid of the flotilla -- a raid in which no Israelis were killed -- angry protests erupted round the world and harsh condemnations were issued by the international community. But the United States offered only a tepid, non-judgmental response, stressing its commitment to Israel’s security, while simultaneously respecting Palestinians' "need for sustained humanitarian assistance and regular access to reconstruction materials."

Israel has mainly rewarded our slavish loyalty by behaving like a petulant, spoiled child. Recently, Israel humiliated the United States when it boldly announced the expansion of 1,600 settlements in East Jerusalem while Vice President Joe Biden was visiting.

Perhaps it’s time the United States, the most powerful country in the world, reexamines its relationship with its "most trusted ally." Only the United States can shake Israel from its moral hibernation. To ensure long-term security and stability for all involved parties, the U.S. must evolve from being a cuckolded Fredo to a coercive father figure who dispenses some old-school, tough love.

Otherwise, tragedies like this week's will continue to play out -- and continue to threaten both American and Middle East security.