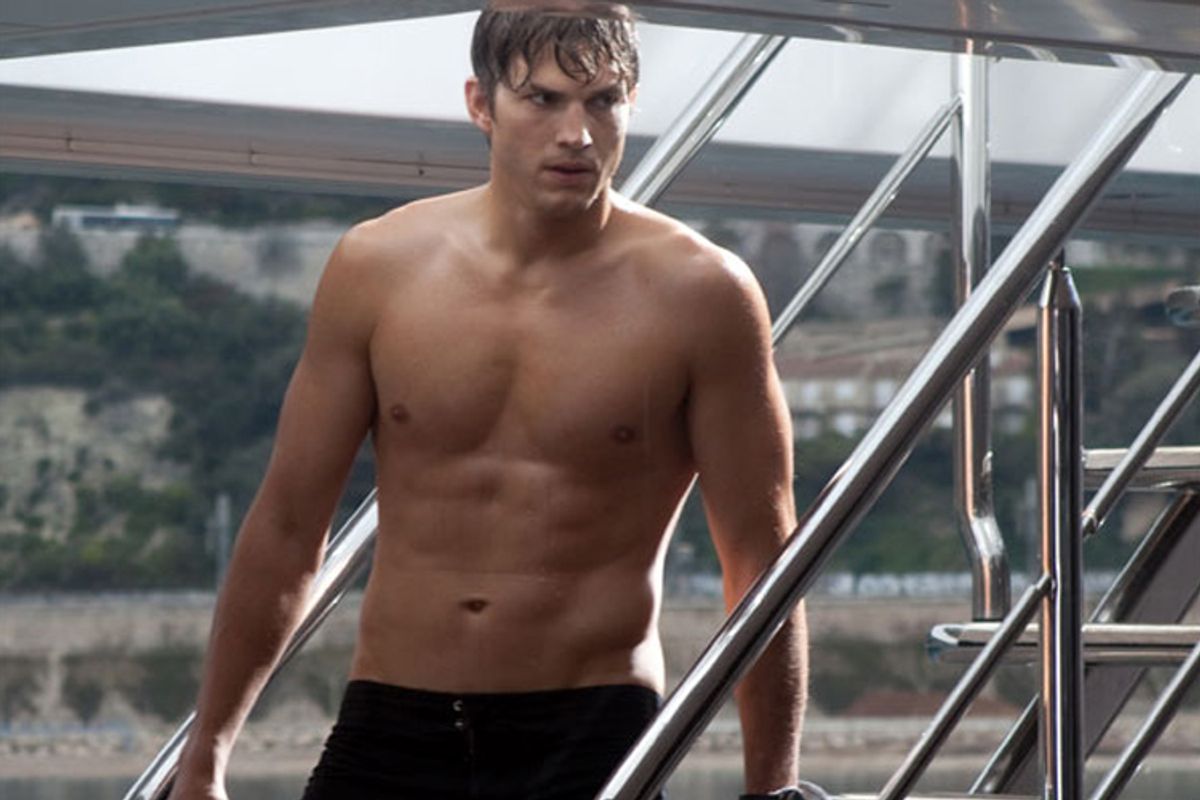 Since the distributors of the Ashton Kutcher-Katherine Heigl spy farce "Killers" declined to screen it in advance for critics — they didn't want to read what I was going to write about it, and I can't blame them — I caught the Friday noon matinee at Southside Mall in Oneonta, N.Y., along with six other paying customers. It was quiet and cool in there, and I had a lot of time to think, especially during the film's dismal opening half-hour, which seems to have been directed by a robot that had learned that helicopters, nice clothes, pretty girls and foreign locations are all good things to have in movies, but not how to stitch them together, let alone why.

I spent most of that time thinking about Ashton Kutcher, who has a few genuinely sparkling screwball-style scenes with Heigl (who plays his sweetie-pie wife) after she finds out he's actually a CIA assassin, and quite a few others where he seems barely present. I was wondering about why Kutcher isn't an enormous movie star, and whose fault that might be. It might well be his fault; celebrities write their own ticket to an unprecedented degree these days, and any claim from me or Kutcher or anybody else that he's been misused or exploited would be laughable. He produced "Killers," which is no better than a mismanaged early-summer time waster, and he produced his best film, "Spread," an L.A. gigolo black comedy that didn't much interest critics or the general public or anybody but me.

Indeed, I've been pondering the Kutch-nundrum since before his non-breakthrough with "Spread," and I'm not getting anywhere with it. I've always found Kutcher a tremendously likable, funny and magnetic screen presence. He's a born movie actor, not a master thespian; I have no desire to see him in "Macbeth" or "Uncle Vanya." (He might be good in "Midsummer Night's Dream.") But when Kutcher's not on autopilot — the way he was the whole way through "Valentine's Day," for instance — he's capable of wily, lively performances that work on various levels and exhibit a ferocious animal intelligence.

We already know that Kutcher has tremendous appeal to the ladies (and to quite a few gentlemen, I would imagine), but you can go to your average Hollywood casting call and find two dozen guys who are that good-looking. Thing is, most of them are going to be assholes. Kutcher's secret ingredient is his good-humored charm, the sense that he's not taking the whole game all that seriously — and most of all, the fact that he's obviously having fun. There's a definite void in the male-star market, with George Clooney and Tom Cruise getting older and Leonardo DiCaprio playing only tortured Scorsese roles, and Kutcher's upside as a leading man whom women long to, um, know better and men long to emulate is very, very high. The closest parallel I can find — I'm ready for the screaming! — is Clark Gable.

Before you explode, let me explain that I mean the closest possible 21st-century cognate or equivalent to Gable, since the roles Gable played, and the kind of public figure he was, are not available today. Like Gable, Kutcher's always going to play the same debonair, good-humored guy who thinks of himself as in on the grand joke of life, but who allows himself to get pulled through the mill of love by some broad anyway. If anything, Kutcher's a lot less of a blasé sophisticate than Gable was; Kutcher's attempt to play a sharp-dressed, French-speaking, soulless spook in the early scenes of "Killers" are particularly flat. (In fairness, that's a fake Cary Grant role, not a fake Gable role.)

Kutcher seems to revel in the inherent duplicity of acting, of pretending to be somebody he's not. No doubt that's what drew him to "Killers," which in its better patches is the story of an ordinary suburban husband with a secret identity. It doesn't have that many better patches. Director Robert Luketic (who also directed Heigl, to unfortunate effect, in "The Ugly Truth") tries at various moments to emulate "North by Northwest" and "Meet the Parents" and some bits of Noel Coward, but the resemblance is pale indeed. Somehow Kutcher and Heigl and Tom Selleck and Catherine O'Hara (as her parents) are all fun to watch a fair amount of the time, without the movie they're in being any good at all.

Pretending to be somebody else can be an innocent, prankish game, like the frat-boy stunts Kutcher pulled as the impresario of "Punk'd," or it can be the deadly serious psychological business we all engage in, wearing various masks in an effort to hide what we think is our real identity. Let's return to my obsessive interest in "Spread," in which Kutcher plays a one-time Midwestern innocent named Nikki who's playing a complicated game with himself and the world: He's pretending to be a user so cynical and calculating that he pretends to fall in love with rich women, based on the quality of their digs and the availability of their money.

As an archetypal example of a celebrity who rose from obscurity — Kutcher was literally an Iowa farm boy and was an engineering student when a talent agent first noticed him — he probably feels as if he's involved in a masquerade every day when he wakes up famous. Unlike so many other celebrities, he seems to be having fun; you never hear about him throwing Russell Crowe hissy fits or punching out photographers, and as he demonstrated on a recent "Letterman" appearance, he tweets back to some of his 5 million-plus Twitter followers personally.

On his Friday afternoon feed, Kutcher argued with somebody about whether deregulation had helped cause the Gulf oil spill, re-tweeted favorable comments about "Killers," and hit a few people back with thank-you notes. No publicist or personal assistant wrote "@delanaay glad u liked it" or "@FionaChan thanx 4 checking itbout" [sic]. Apparently there's a biodiesel truck on his parents' farm! The guy just makes it hard to dislike him.

Which brings me back to the question of whether Kutcher really wants to be the Gable of the 'teens, or whether appearing in sub-mediocre fare like "Killers" — which is bungled rather than flat-out terrible — is all the movie-stardom he wants and needs. One Hollywood studio executive suggested to me that lowered expectations might be part of the Kutcher master plan: People think of him as the "That '70s Show" goofball and the prankster from "Punk'd" and a dim-bulb celebrity trophy husband, and they don't notice that he's becoming the Ruler of All Entertainment Media.

Well, maybe. That's a better theory than anything I've got to offer, and Kutcher has all those tweetees to go with his good looks, beautiful wife, piles of money and general affect of being totally not bothered by anything. But "Killers" is a dead end — it's doesn't have half enough sizzle to turn Kutcher into a money-making leading man, and it definitely won't encourage critics and other industry observers to treat him with respect.

It's movies like "Spread," where Kutcher worked with talented British filmmaker David Mackenzie, or the straight-to-DVD "Personal Effects," a downbeat indie drama adapted from a Rick Moody story in which Kutcher played a grief-stricken young man who begins a relationship with an older widow played by Michelle Pfeiffer, that suggest there's some genuine hunger and dramatic ambition beneath the buff physique and the bonhomie. (Mind you, neither of those films made a nickel.)

Like many actors and performers who become their own bosses too early in the entrepreneurial entertainment economy, Kutcher evidently can't be trusted to make the right decisions on his own behalf. Maybe it's useless to imagine that he can find his version of Frank Capra or George Cukor or David O. Selznick — the director or producer or executive who sees his potential, gains his trust and channels him correctly. Maybe the goofballing, self-effacing, multitasking half-assed-acting dude of today is all we get, and all we deserve. But I can't help it: There's a major movie star inside you, Ashton, but only you can let him out.