Israel and the psychology of "never again" 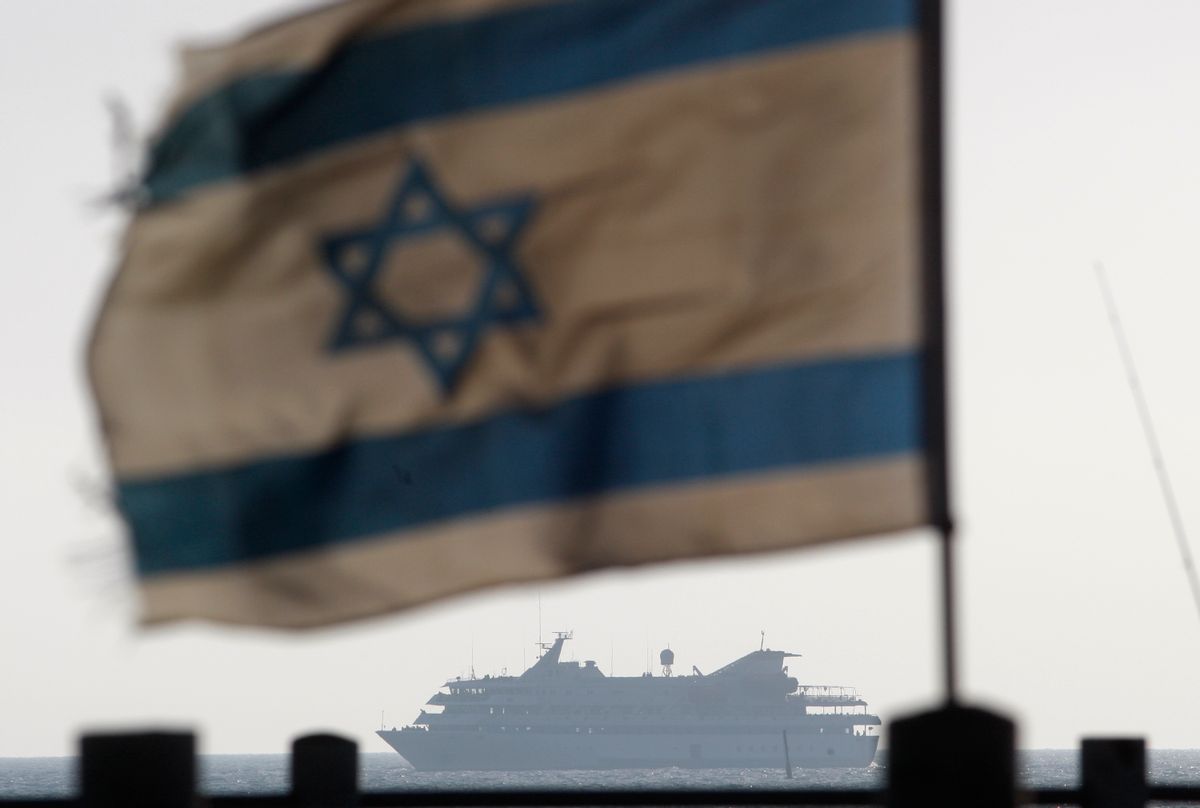 An Israeli flag flutters in the wind as a naval vessel (not seen) escorts the Mavi Marmara, a Gaza-bound ship that was raided by Israeli marines, to the Ashdod port May 31, 2010. Israeli marines stormed the Turkish aid ship bound for Gaza on Monday and 10 pro-Palestinian activists were killed, triggering a profound diplomatic crisis. REUTERS/Amir Cohen (ISRAEL - Tags: POLITICS CIVIL UNREST IMAGES OF THE DAY) (Reuters)
--

Why does Israel continue to act against its own interests?

Over the years, and especially since 2006, the Jewish state's deadly, over-the-top military actions in response to provocations from Hamas and Hezbollah — and now from a flotilla ferrying humanitarian aid to Gaza — have backfired. And in each case, the Jewish state has grown less secure by increasing its international isolation and fueling fury much closer to home.

Four summers ago, Israel's war in Lebanon displaced a million people in an attempt to crush Hezbollah, which grew from the settling dust and resentment of an Israeli invasion a generation earlier. But the 2006 war only made Hezbollah stronger.

Israel could have predicted such consequences. In 1988, it tried to weaken Yasser Arafat and his secular PLO by encouraging the growth of Hamas and its Islamic adherents. This "enemy of my enemy is my friend" strategy didn't work either, leading to years of attacks and reprisals and, eventually, to the 2009 war in Gaza. Fourteen hundred Palestinians died, compared to 13 Israelis from rockets fired from Gaza. Yet this invasion, too, missed its targets: Hamas remains firmly in power, and a kidnapped Israeli soldier, Gilad Shalit, has still not been liberated from his Gazan captors.

Then came another kind of confrontation, from a civilian flotilla armed with food, toys, books, medical supplies and a mission to break the blockade of Gaza. Despite claims to the contrary, Israel's blockade has "deepened the ongoing humanitarian crisis," pushing it to "catastrophic levels," according to Amnesty International. "Mass unemployment, extreme poverty, food insecurity and food price rises caused by shortages left four in five Gazans dependent on humanitarian aid." Yet this "flagrant violation of international law" has been met largely with silence and complicity by the international community, "led" by the United States.

The unwillingness of the United States and the EU to break the stranglehold led directly to this week's calamity. Flotilla organizers indeed welcomed the prospect of provoking Israel into a high-seas raid in order to splash light on the Gaza crisis. But the Israelis didn't just take the bait. By boarding the ship outside its territorial waters, and killing at least nine of the civilians on board, Israel once again weakened its moral position, such as it is. This provoked new calls to break the Gaza siege, lent fresh support for boycotts of Israeli goods, and shattered the country's already-fragile relationship with Turkey.

Turkish prime minister Tayyip Erdogan, already furious over the Gaza war, the blockade and Israel's deliberate diplomatic humiliation of the Turkish ambassador, is changing the game. No longer, it seems, will there be joint military exercises and Israeli support for Turkey's defense modernization. Turkey appears poised to make a clean break with Israel while becoming the Palestinians' main champion — and it grows closer to Iran.

None of this is in Israel's interest, of course. So why does Israel persist in such behavior?

One answer: The country is stuck in the political psychology of "never again." The Jewish state appears so trapped by the wounds of its own terrible history that it keeps repeating its past mistakes of excessive force, even though it knows these will only isolate it and therefore weaken it further. In this way, the politics of trauma drive the nation ever further from the safe harbor that ordinary Israelis have so long craved and never enjoyed.

The presence of the Holocaust (Shoah in Hebrew) so permeates culture and politics in Israel that military leaders describe security policy as "Shoah-proof," according to Avraham Burg, the Israeli author of "The Holocaust Is Over; We Must Rise From Its Ashes."

This psychology is not lost on Palestinians, who experience its impact. "I understand Israel’s reflexive use of force against civilians as a symptom of a structural pathology," wrote the Palestinian psychologist Eyad Sarraj, president of the Gaza Mental Health Programme and founder of the International Campaign to End the Siege of Gaza, in the wake of the flotilla tragedy. "Israel resorts to the use of maximum force as a form of intimidation …It is quite possible," Sarraj wrote in the National (Abu Dhabi), "that through Israel’s actions, it is tightening its own noose." Indeed Israel, stuck in its own psychic maze, continues to victimize itself. Now others should insist this destructive behavior stop.

U.S. officials, who have begun to recognize that blind support of Israel is not in our strategic interests, must stop sanctioning Israeli impunity. They need to insist on an end to the blockade and on a restoration of sufficient levels of food — not to mention rebuilt homes and lives — for the people of Gaza.

Sandy Tolan is the author of "The Lemon Tree: An Arab, a Jew, and the Heart of the Middle East." He is an associate professor at the Annenberg School for Communication and Journalism at the University of Southern California.