This week in crazy: Tony Hayward

BP may not know how to clean up the devastating oil spill, but its CEO sure knows how to whine about it 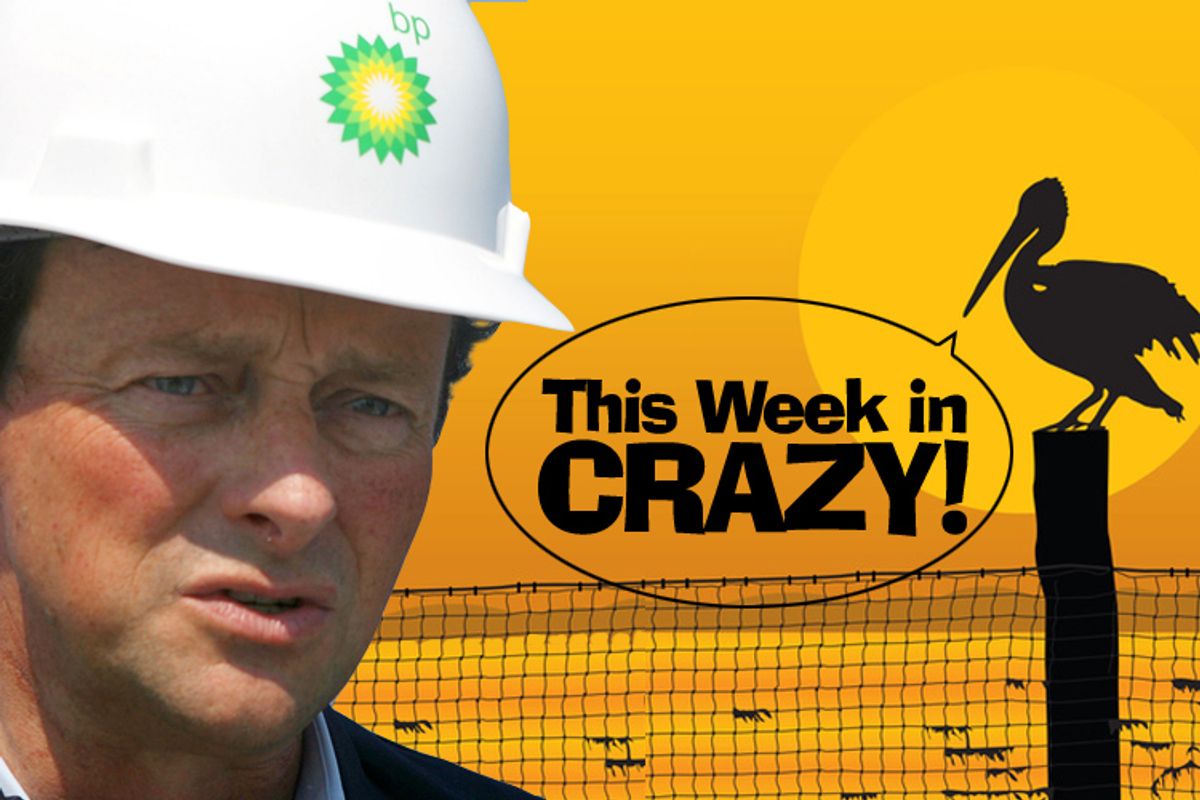 When you're the guy at the top of the corporate ladder that's ultimately responsible for spewing millions of gallons of oil into the Gulf of Mexico (and, soon, probably fouling the East Coast as well), it's not easy to make your reputation even worse than it already is. But Tony Hayward didn't get to become CEO of BP by doing what was easy.

And so this week, more than a month into the horrific Gulf oil spill, Hayward managed to sink to a new low.

"There's no one who wants this over more than I do," the beleaguered oilman told the "Today Show" on Sunday. "You know, I'd like my life back."

Just like that, anyone who — after weeks of watching BP dissemble, block photographers from the spill and launch an endless succession of failed remedies with dopey names — didn't already want to aim a junk shot at Hayward must have lost whatever sympathy they had for him. Eleven oil workers were killed in the explosion that sank BP's rig; the Gulf of Mexico may be permanently ruined; thousands of fishers and shrimpers have lost their livelihood; birds, fish and turtles are dying by the score; some people are starting to wonder if nuking the Deepwater Horizon might be the best way to stop it. And poor Hayward wants his life back.

Then again, can you blame him? That life he wants back is pretty cushy. BP paid Hayward $6 million last year — a 41 percent raise over the year before, even though the company's profits fell 45 percent.

Every penny of which he must feel he earned. After all, despite a safety record far worse than any of its major competitors, BP somehow pulled off a cynical greenwashing ad campaign, marketing itself as environmentally friendly and declaring itself "beyond petroleum." So what if it turned out the only thing green about BP was its flowery logo? Hayward, CEO since 2007, had steered the company into a new, Orwellian branding strategy, where merely saying it was taking precautions against accidents and spills was enough.

That magical thinking apparently carried over into the way he processed the spill. Well after scientists had started saying the Deepwater Horizon explosion was already the worst environmental disaster in the nation's history, Hayward tried to minimize the whole thing. The spill wouldn't be so bad, he declared, because the Gulf is a "very big ocean." In fact, it would likely turn out to be a "very, very modest" disaster. (Besides, haven't you seen our logo? Of course we're not responsible for the biggest oil spill the U.S. has ever seen!)

Still, it's one thing to lie about how much oil your company is dumping, and it's another thing altogether to make yourself seem like the pitiful protagonist of the whole story. And sure enough, by the end of the week, BP's new PR armada had realized Hayward was making things worse.

So a lengthy apology of sorts was placed (in the sympathetic nest of the Wall Street Journal's Op-Ed page), and the CEO presumably learned to stop whining.

Maybe now, instead of worrying about what Hayward is going to say next, BP can get back to worrying about how to stop the spill and clean up its mess. Which is what really matters — not poor Hayward's disrupted routine. After all, Tony, we'd all like our lives back. Unfortunately, thanks to BP, this disaster shows no sign of going away anytime soon.