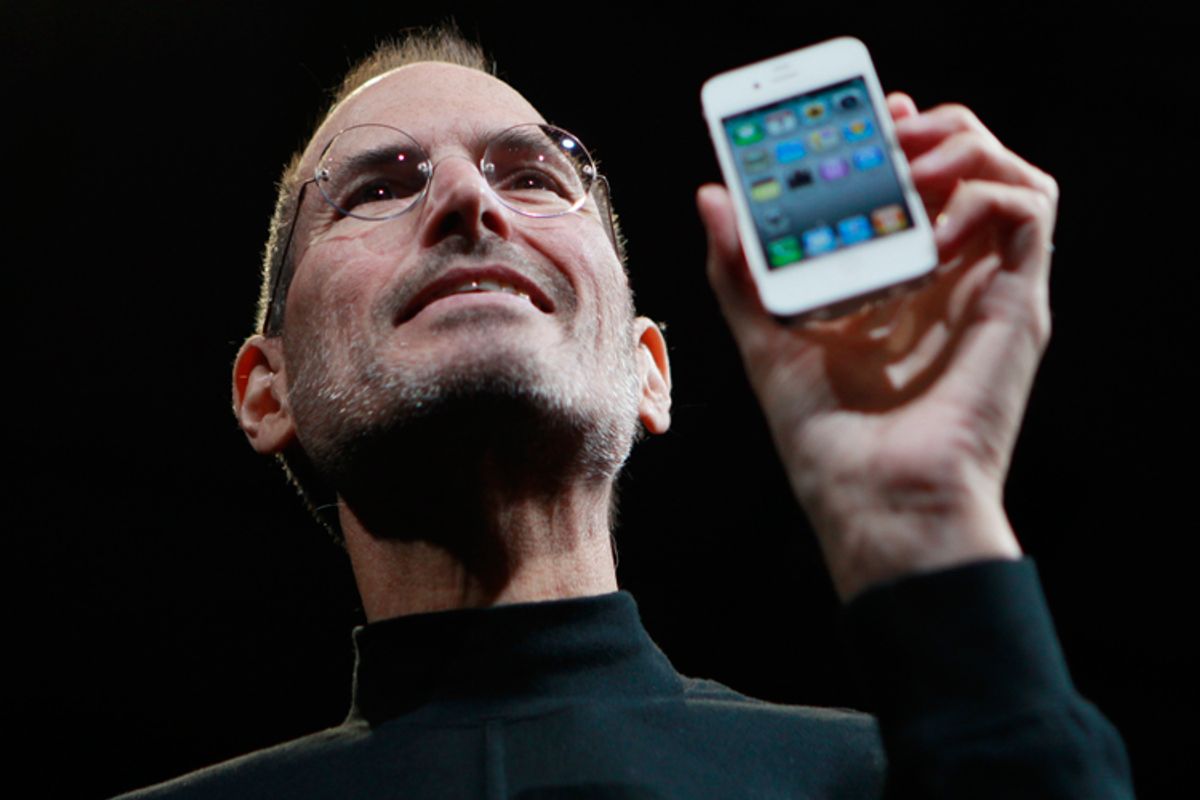 It does look like a nice piece of gear, the new iPhone. The chances I'll buy one: zero, at least in the near term.

Like Salon colleague Andrew Leonard, I've been watching from outside the Apple World Wide Developers Conference, feeding on live blogging, tweets and other coverage of Steve Jobs' keynote this morning. (The best way to do so, by my reckoning, was following Gizmodo -- you know, the site famously under investigation for having bought a pre-production unit of the device from someone who said he found it in a bar -- which aggregated everyone else's live coverage after Apple showed who's boss by not issuing a press pass.)

And like Andrew, I'm somewhat agog at what he called "a pace of innovation in the smartphone sector that is blowing away previous examples of fast-forward technological innovation." Of course, as a gadget hound I find this stuff more entertaining than daunting.

Improvements in cameras, display and video are welcome, as they've been on other devices -- and Apple has upped the ante with its new display. I'm especially intrigued, however, by the addition of a gyroscope. This and other sensors built into the phone will enable fascinating new services, if Apple allows them, based on location, motion and other data the devices will be generating automatically as people use them. Journalists, among other people, should be thinking hard about what they might do with such capabilities.

But while there are some nifty new features in the hardware and software, I'll stay away for the same reasons I'm not buying the first version of the iPad. AT&T's less-than-stellar network isn't the issue, as it is for some people. For me, as noted in last week's piece about Apple, it's about something more fundamental: I don't care to support Apple's increasing control-freakery over the ecosystem it's creating around the iPhone and iPad.

Assume that every serious smartphone competitor will match the hardware features in a few months. Assume as well that software developers -- especially in the more open Android ecosystem -- will get close to parity, not to mention finding ways to do things that Apple won't allow in its walled garden. Then those other ecosystems, which already offer great advantages, will be the firm leaders.

The race will continue, that is, only if the tech industry does better with its major flaw: Digital networks aren't up to the job we're demanding of them. It's getting more difficult to put serious stress on the processor of even a low-end personal computer these days -- only a few software programs are that demanding -- but still too common for users to bring networks to their knees.

The carriers are imposing new constraints on their users, in mobile and what Americans laughingly call broadband (a pale imitation of what people in places like France enjoy). AT&T's new mobile usage tiers are likely to be the start of a trend, so it's not a coincidence that Apple's "Face Time" video conferencing system is WiFi only for now. Bottom line: If you buy the new iPhone, don't count on doing the most interesting things with it when you're out and about.

A longtime participant in the tech and media worlds, Dan Gillmor is director of the Knight Center for Digital Media Entrepreneurship at Arizona State University's Walter Cronkite School of Journalism & Mass Communication. Follow Dan on Twitter. More about Dan here.