Beck has endorsed a book by the late Elizabeth Dilling. Now he should read the 1943 book that exposed her ilk 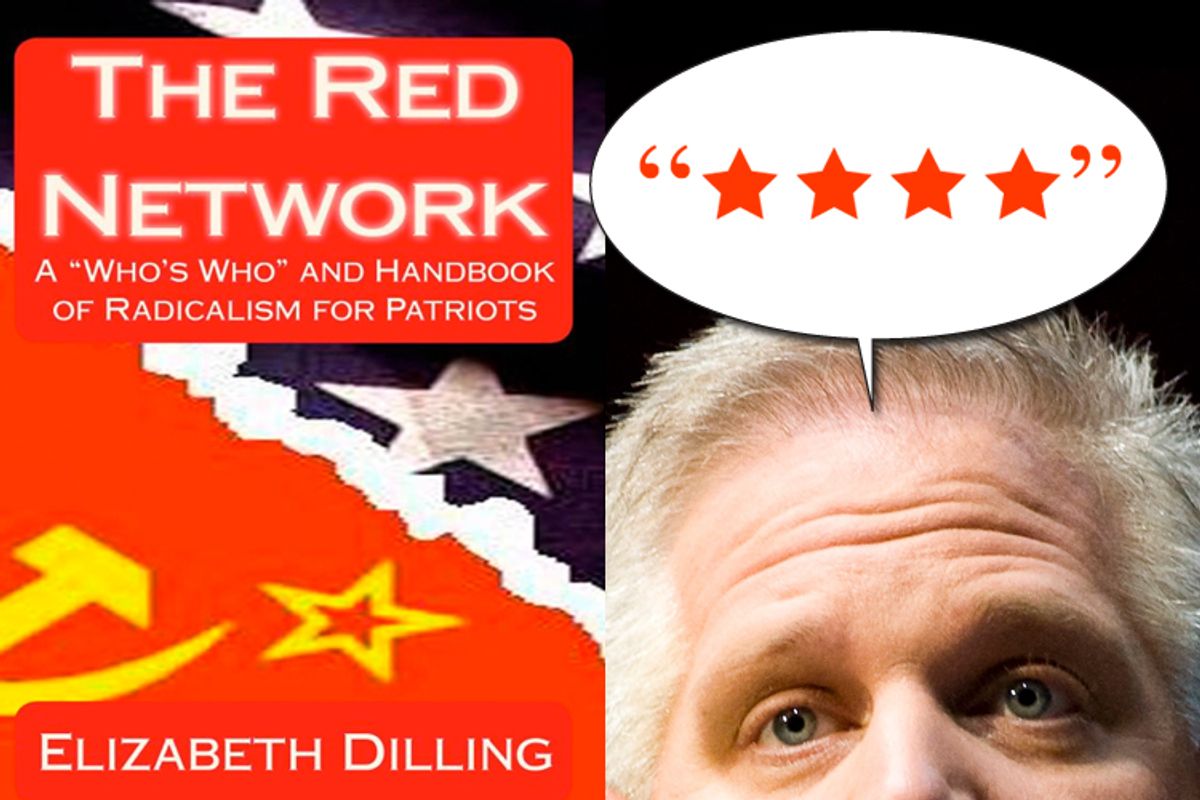 Glenn Beck's latest excursion to the farthest fringes of the old American right, which occurred on his radio show last Friday when he endorsed "The Red Network" by the late Nazi author and activist Elizabeth Dilling, revealed much about his own weird outlook. According to the Fox News star, Dilling's book, a racist and anti-Semitic tract published in 1935 as an "exposé of Communism," strongly resembles the patriotic service that he performs today.

It is of course true that Dilling, and every other Nazi, Silver Shirt, Bundist and fascist of that era, promoted their ideology as "patriotic," "Constitutionalist" and devoutly "Christian," much as Beck does.

But if he would like to understand the dismal pedigree of his own work in detail, he can look up another old book: "Under Cover," by John Roy Carlson, published by E.P. Dutton in 1943. Carlson's gripping work was among the greatest efforts of wartime investigative journalism, which he reported while masquerading as a pro-Nazi publicist under the name George Paganelli. (Carlson itself was a pen name for Arthur Derounian.) A sensational bestseller, "Under Cover" was a featured selection of the Book-of-the-Month Club, which touted it as "a Who's Who of demagogues, crackpots, patrioteering racketeers, and Axis agents."

What Carlson/Paganelli learned as he ingratiated himself with Dilling and her ilk was that they were indeed spreading hate and sowing defeatism directly on behalf of the German and Japanese propaganda ministries. The Germans used their own news services to promote Dilling's operation, known as the "Patriotic Research Bureau," along with the works of William Dudley Pelley, Charles Hudson and Gerald B. Winrod, the Kansan who became notorious as the "Jayhawk Nazi." In short, the self-proclaimed patriots were traitors.

As Media Matters suggested in reporting Beck's embarrassing blunder, he clearly didn't bother to find out anything about Dilling's extremely checkered history before babbling about her book on the air, or he would quickly have discovered that she always was (and remains) a favorite of Nazis and Nazi sympathizers, including David Duke and the late Willis Carto. Brandishing a copy of "The Red Network," Beck told his audience that he had read it overnight, finding proof within that Sen. Joseph R. McCarthy "was absolutely right! He may have used bad tactics or whatever [sic], but he was absolutely right!"

What McCarthy was "right" about, Beck didn't say specifically, and in fact "Red Network" has little bearing on McCarthy's later claims concerning Communists in the State Department and the United States Army. But he went on to blurb the Dilling book as "the who's who and handbook of radicalism for patriots, documenting who are the Communists in America ... Who were the overwhelming number of Communists? Labor unions!" Still cackling, he closes with what he clearly considers a note of contemporary relevance. Dilling had discovered that "there's this teachers union thing ... You want to know who the real radical Communists are? The NEA!" Evidently Beck believes that since this woman, a wildly anti-Semitic nutcase, charged that the National Education Association was somehow Communist in the 1930s, we should assume, with Beck, that the NEA is a hotbed of Marxism in 2010.

If analogies to the past are appropriate, as Beck seems to think, then let's play. As "Under Cover's" investigation showed, the most virulent pro-Nazi and anti-Semitic pamphleteers of the '30s, including Dilling, started out as anti-union propagandists, selling their services to industrial corporations that wanted to kill the burgeoning labor movement. So it should come as no surprise when Beck, perhaps the most vicious contemporary voice against labor (including all of the "first responders" who belong to police, fire and emergency service unions), finds a kindred spirit in Dilling.

Following the embarrassing revelations about his latest intellectual idol, Beck has now attempted to erase what he said three days ago and portray himself as the victim of "the Left." That's just what Dilling would have done. Go read "Under Cover," Glenn, and then repent for endorsing an ardent admirer of Hitler -- unless that doesn't bother you. (Before anyone cites Godwin's law, it doesn't seem relevant when discussing actual Nazis and their friends.)