Helen Thomas: Our heroes are human

The groundbreaking journalist's comments about Palestine are disappointing, but let's not make this her legacy 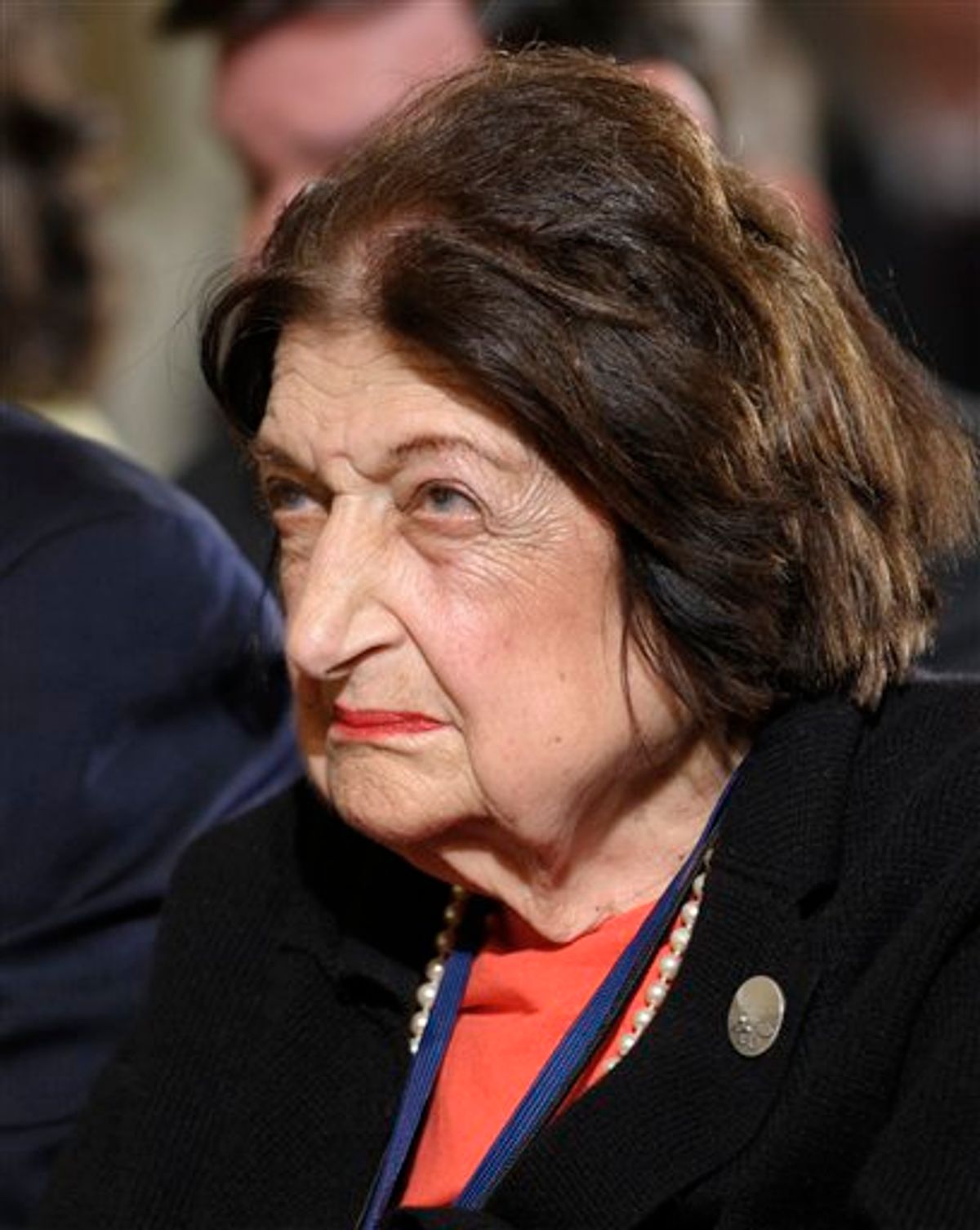 FILE - In this May 27, 2010 file photo, Helen Thomas listens to President Barack Obama during a news conference in the East Room of the White House in Washington. Controversial remarks about Israel by veteran White House reporter Helen Thomas drew sharp criticism from the Obama administration on Monday, as well as the cancellation of a high school graduation speech she was to deliver. White House press secretary Robert Gibbs was asked at his daily briefing with reporters about President Barack Obama's reaction to Thomas' remarks. Gibbs called them "offensive and reprehensible." (AP Photo/Susan Walsh, File) (AP)
--

Under any other circumstances, it wouldn't be a surprise to hear that Helen Thomas -- the titan of the White House press corps -- is retiring. For god's sake, the woman who has reported on the U.S. presidents for five decades is turning 90 this summer. Who would begrudge the trailblazer for hanging up her press card so that she can sleep in once in a while?

But the news that Thomas is retiring from Hearst Newspapers comes in the wake of controversy shrouding her comments about Israel and Palestine. The news, then, is not so simple.

If you've been under a rock this past week, here's what happened: Thomas was videotaped saying that Jewish people "should get the hell out of Palestine" and go back to Germany or Poland. As the public recoiled from her comments, Thomas issued an apology and said that her remarks "do not reflect my heart-felt belief that peace will come to the Middle East only when all parties recognize the need for mutual respect and tolerance." Nonetheless, she was dropped by a national speaker's bureau and canceled a high school commencement address she was expected to give. And now comes news of her retirement after 67 years in the journalism business.

Had Thomas retired a month ago, the news would have cued a celebration of her contributions to journalism. And let's be frank: These contributions are truly astonishing. In 1943, a year after she graduated from Wayne State University, she was hired by United Press International. So began a long trajectory of barrier breaking in the places where media and politics meet, places that are hardly welcoming to professional women. Thomas became the first female officer of the National Press Club -- which had been exclusively male for nearly a century -- and the first female officer of the White House Correspondents Association. She served as the WHCA's first female president in the mid-1970s. Thomas also helped persuade President Kennedy to sit out the press correspondent's dinner because women were not allowed to come. As well, Thomas plowed her way into the Gridiron Club, the oldest and most prestigious Washington journalism club, becoming its first female member and, later, its first female president.

But today, Thomas' career abruptly ends in what we are safe in assuming is a retirement not of her choosing. While I don't mean to be an apologist for her remarks about Jewish people, I must note one thing: Thomas has been working as a columnist, not reporter, for the last decade. So it isn't the fact that she's publicly editorializing on current news that is the problem here; her job is to have opinions. The uproar was inspired because people don't like her opinions.

I don't like how Thomas voiced her opinions in this video; it was sloppy and hurtful. But her views aren't exactly news; the gist of them are evident from her past columns. Meanwhile, Thomas joins a long line of opinion-makers who have uttered controversial, even despicable comments. Rush Limbaugh, anyone? Glenn Beck? Howard Stern? Sean Hannity? None of these voices seem to fear a forced retirement. What's different about Thomas? For one, she's old. For two, she's a woman. And while I won’t pretend this is a simple scenario where ageism and sexism are wholly to blame, it's hard to imagine that they aren’t factors at all.

Now, I'm afraid that this is the legacy Thomas will be left with: Because she wasn't perfect, she was terrible. In fact, of course, Thomas is neither perfect nor terrible. What she represents is that uncomfortable reminder that our heroes are not infallible. They are not everything we want them to be, no matter how much we pretend otherwise. Our heroes will disappoint, sometimes egregiously.

I hope Helen Thomas' accomplishments aren't diminished in light of her faults. I also hope her accomplishments don't keep us from holding her accountable when she errs. Perhaps the greatest takeaway from this debacle might be the realization that, yes, people with significant failings can accomplish great things. Knowing this, we close the distance between ourselves and those we admire. Our heroes are not other; they are us. Rather than being a disappointment, this can open the door to what we might expect from ourselves. This can be a push toward our own great trailblazing, our own groundbreaking, our own achievements.