A baking hero shares his recipe for honey cake

A favorite old bakery faded away. I found its owner decades later, and he can't keep his recipes to himself 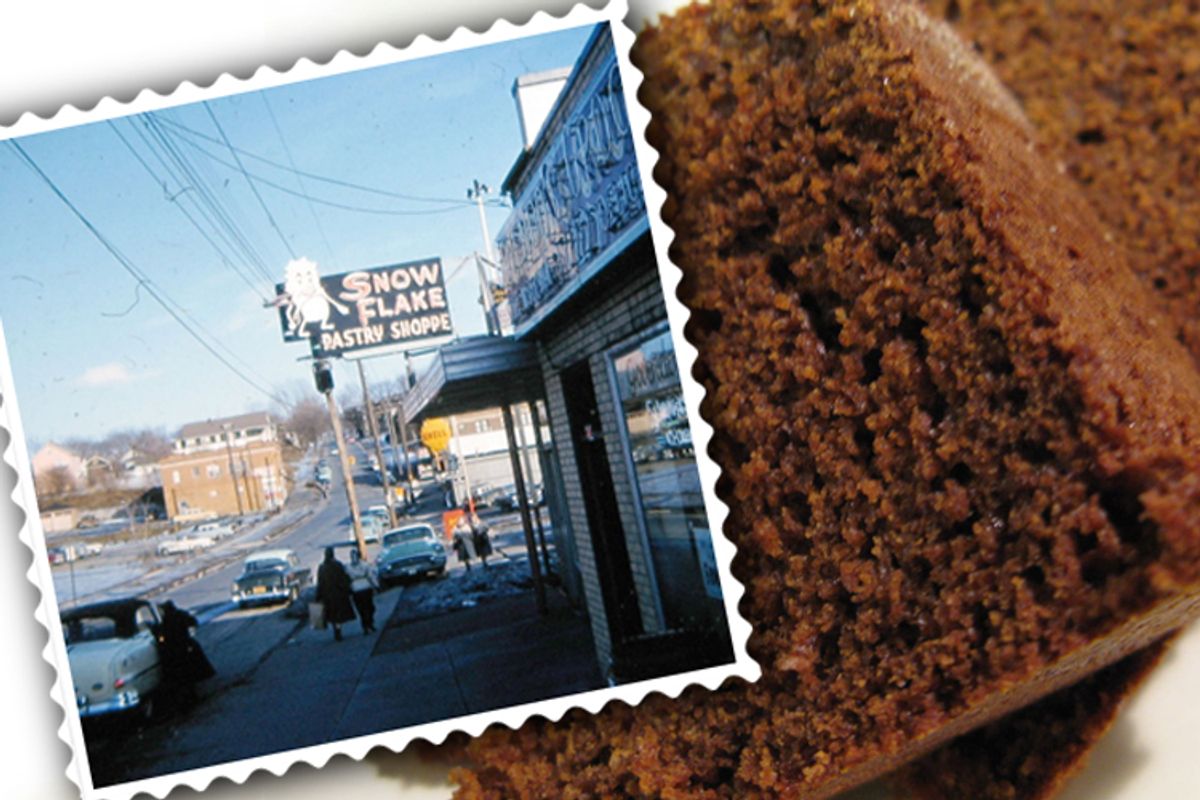 Every year at Rosh Hashana I make honey cake. Inevitably heavy and almost inedible, I imagine all kinds of ways to repair the recipe, but promptly forget about it until the next year, when tradition compels me to make another one. We never eat it, but the leftover cake, wrapped in foil, is great: As a doorstop, paperweight and, in a pinch, a substitute brick to flatten pan-roasted chicken.

It took my new Uncle Milt to fix my honey cake wrecks, but it's not often adults get to adopt new uncles. Months ago, I wrote a story featured in Salon's Food section about our family tradition of making half-moon (aka black-and-white) cookies, and I reminisced about being a kindergartner going to the Snowflake Pastry Shop in Syracuse, N.Y., to buy them. I was extra-tall then, standing in the bustle of the morning rush, lucky enough to see all the goodies in the cases without having to jump. The ladies in the white uniforms and hairnets would give me a cookie for not leaving fingerprints on the glass. I'm sure I saw owner Milt Zeigler there, but back then I didn't know him, too distracted by the cookies in the case.

Someone in Milt's family saw the article I wrote and sent it along to him, Milt's son e-mailed me, and I found myself one day on the telephone talking with Milt Zeigler, learning all about those Snowflake Pastry Shop days from the other side of the counter.

He told me about the early days at Snowflake, how it began as a family bakery in the Bronx. How his dad, Isidore Zeigler, went to Hungary at the turn of the last century to learn baking and make his own mark. How the family ran the shop for about 80 years, and how in heady times, their black rye bread was so famous that a restaurant in Alaska had it shipped and a patron recognized it just from the look and smell alone. The lines at Snowflake were always out the door early in the morning when people still went to the bakery to buy their daily bread and morning pastries.

But before long, our phone calls turned from a chance connection and stories about the old days into something else. We became friends. I started converting some of Milt's old recipes to home-kitchen proportions. He'll call without hesitation: He says hello and begins talking in the middle of a thought. Fortunately, I am pretty good at catching up. We talk about the neighborhood, about life decades ago in Syracuse, about friends and family and doctor's visits and various ailments of the day, and his wife chimes in from the background. But mostly we talk about the bakery.

He laughed. "That you are!"

And making cookies for the entire city, of course, is what Milt used to do. But the family sold the bakery in the '80s, and the sad news is that bakeries like Snowflake all over the world are vanishing one by one. Snowflake's original building has been razed. Gertel's on Hester Street in NYC is now condos. In Paris, on Rue des Rosiers, the heart of the local Jewish community for centuries, Sacha Finkelsztajn, a lone Jewish patisserie, hangs on.

I am a very lucky to have Milt just a phone call away. To be able to make authentic Snowflake half-moon cookies and feather-light honey cake? Awesome. I only hope I make him proud.