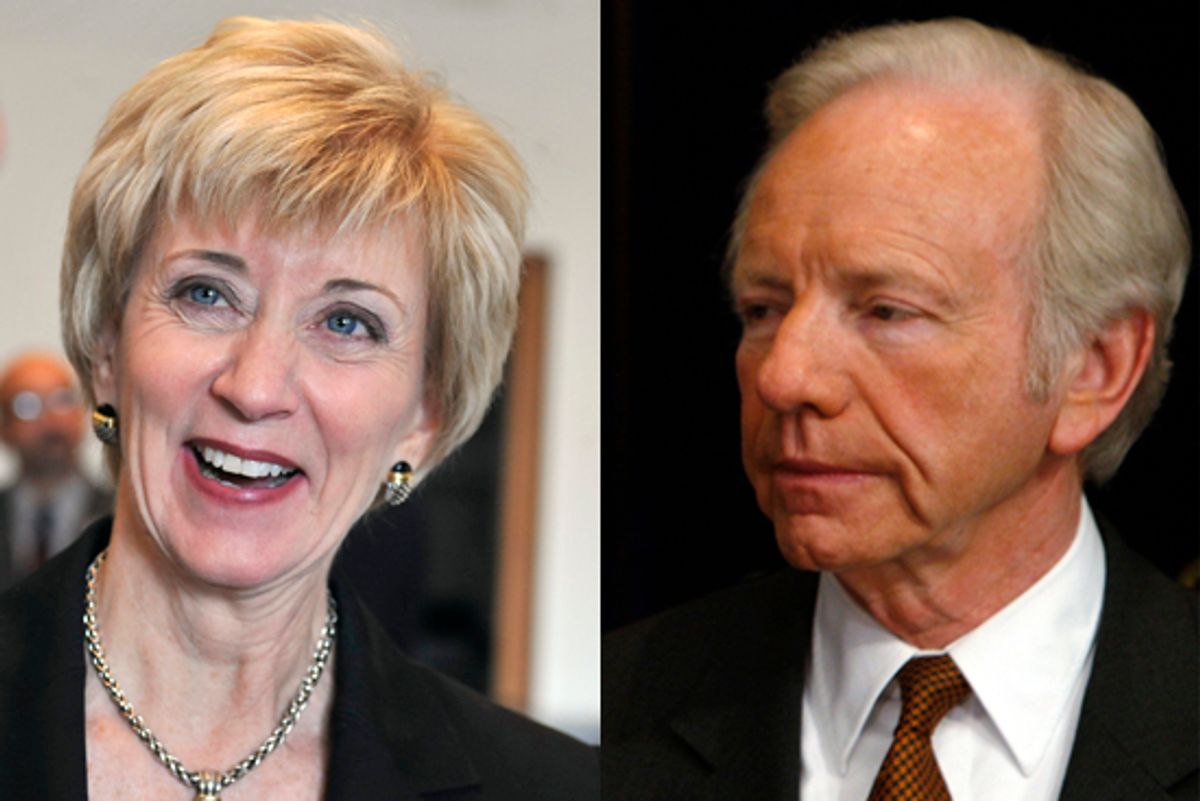 In this April 14, 2010 photo, Linda McMahon speaks to attendees after at a candidate's forum at Eastern Connecticut State University in Willimantic, Conn. McMahon has had some infamous moments in the ring: kicking a man in the groin, getting slapped across the face by her daughter, and sitting in a wheelchair, feigning a coma, as her famous husband cavorted before thousands of screaming fans with a scantily clad "Diva." McMahon last year stepped away from her wild World Wrestling Entertainment empire to climb into the political ring, where she has parlayed some of her experience with attention-getting stunts into a viable Republican candidacy to succeed the retiring Chris Dodd in the U.S. Senate. (AP Photo/Jessica Hill) (Jessica Hill)
--

Connecticut senator and former Democratic nominee for vice-president Joe Lieberman is just not sure whom he'll endorse in the U.S. Senate race between Connecticut Attorney General Richard Blumenthal, Democrat, and wrestling entrepreneur Linda McMahon, Republican. He can't make up his mind! Sure, he's known and respected Blumenthal for years, but Linda McMahon has a lot going for her, too. Like, endorsing her would enrage the mean liberals who tried to unseat Lieberman in 2006. And annoying those terrible liberals is pretty much all he lives for, these days.

Lieberman is perhaps the least popular senator currently in office, so his endorsement is completely meaningless. Getting worked up about it is not really worth anyone's time. But still -- just like in the healthcare debate, Lieberman is letting his petty desire for revenge take precedence over his supposed principles, again.

"I'm not ready to make a choice," Lieberman, who is still a registered Democrat, told the Connecticut press yesterday.

McMahon is the CEO of World Wrestling Entertainment. The National Review's Rich Lowry recently explained just how debased and vulgar the entire WWE phenomenon is. Especially if you're a moralistic crusader for "decency" in mass culture. Which Joe Lieberman has always been.

Go ahead and read that important report on TV sex and violence, penned by the Joe Lieberman of 2000. He urges parents to call the FCC to complain about relentless, child-hurting sexual and violent content on television. He even blames TV sex and violence for teen pregnancy and school shootings:

Sadly, those select programs, along with much of what broadcasters honorably do in their communities, are being overshadowed and overwhelmed by the on-air abundance of gratuitous sex and violence. The threat posed by the accumulated impact of these messages would be consequential at any moment, but it is especially so now, when children are gunning down their classmates and teachers and our country is plagued by an epidemic of teen pregnancy and sexually transmitted diseases.

The evidence is so compelling, and the risks to our children are so serious, that we are obliged to ask whether the broadcasters are fulfilling their public trust. We hope that parents, grandparents, educators, and other citizens who share these concerns will ask the same question, and thereby help us engage the television industry in an honest dialogue about its legal and societal responsibilities. In the end, there is no better guardian of the public interest than the public itself.

Here's how the Joe Lieberman of 2010 responded when asked, point-blank, how he could consider supporting the CEO of WWE after his history of decrying immoral pop culture products:

"You know the first time I met Linda McMahon was around that very subject. I was concerned and I was working with colleagues in the Senate, and Bill Bennett, about the messages that the World Wrestling was sending out to kids. And we had a good conversation," Lieberman told reports Monday. "But you know, she's running for the Senate now, so I'm not gonna hold her her accountable for anything she did in the past. I want to hear what her ideas are on foreign policy, domestic policy

Hm! Sounds like Joe Lieberman would consider endorsing Joe Francis as long as he might vote to bomb Iran.