What to watch in tonight's primary elections

Halter vs. Lincoln, Sharron Angle, Nikki Haley and other highlights of a wild day of primaries in 12 states 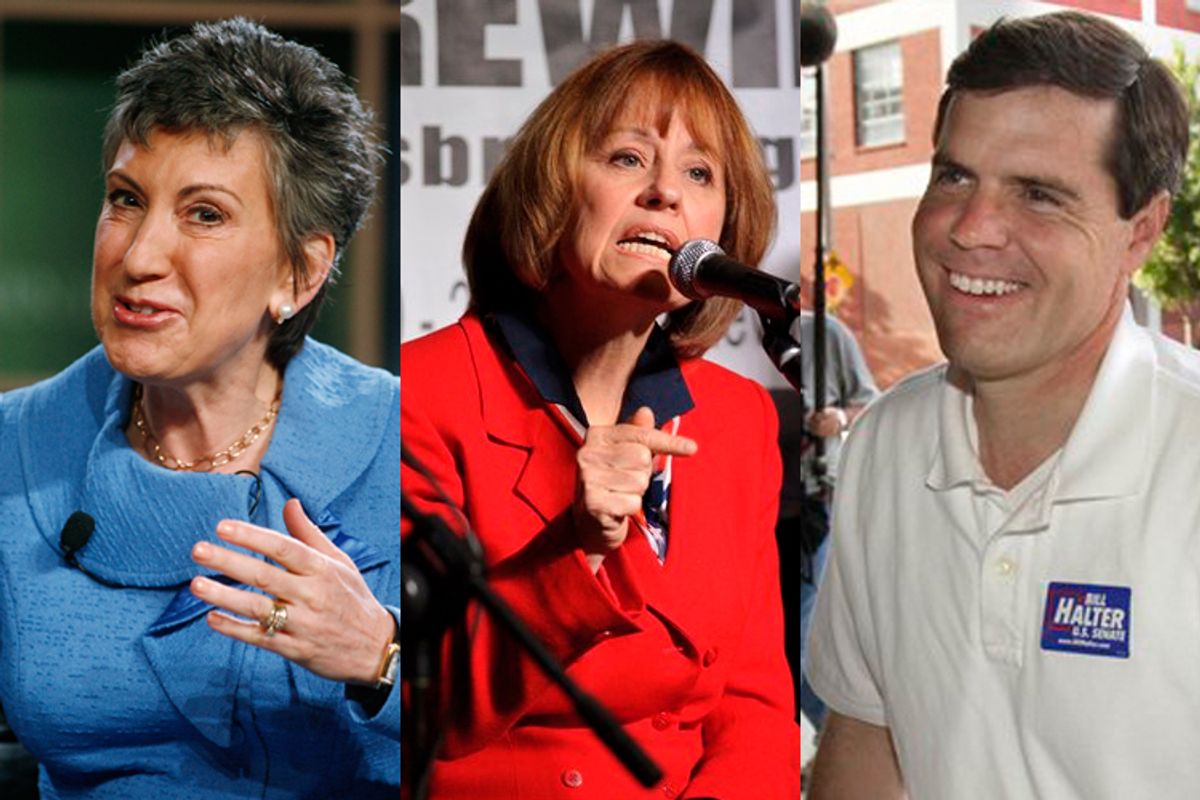 The political world hasn't seen a primary day like today since the 2008 presidential election. By the end of the night, Republicans will have chosen a challenger to Senate Majority Leader Harry Reid, in Nevada; Democrats will have finally settled a nasty civil war in Arkansas; and the world will know whether we'll still have Nikki Haley to kick around any longer.

With closely watched elections in California, Nevada, Arkansas and South Carolina (and less well-known contests in eight other states), here's a guide -- in chronological order -- of what to watch for as the returns come in.

South Carolina The GOP primary for governor has been dirty even by Palmetto State standards -- which is saying quite a bit, considering this is the place where George W. Bush fended off John McCain 10 years ago in the presidential election by spreading false rumors that he had an illegitimate black love child. (Though it's not entirely clear why that hurt McCain so much, since South Carolina did love Strom Thurmond.) Nikki Haley, the preferred candidate of Mitt Romney, Sarah Palin and South Carolina first lady Jenny Sanford, is up in polls -- although two different Republican political consultants in the state have claimed they had affairs with her, in an attempt to shoot her candidacy down. One of them works for a rival, Lt. Gov. André Bauer, who demanded Gov. Mark Sanford resign last year after his escapade to Buenos Aires (and who had to deal with rumors about his own sex life when Sanford allies, in revenge, evidently fanned a whisper campaign that Bauer was gay). But it's not all about sex; last week, a Bauer supporter, state Sen. Jake Knotts, attacked Haley, whose Sikh parents immigrated from India, by saying, "We've already got a raghead in the White House, we don't need another raghead in the governor's mansion."

None of the attacks seem to have done much to slow down Haley, who -- as the endorsement from Palin, in particular, shows -- is plenty conservative. She could go on to become the state's first female governor if she wins. Democrat Vincent Sheheen leads his party's field, but chances are that race is heading to a runoff. The GOP fight would, too, if no one gets 50 percent of the vote.

Also in South Carolina, GOP Rep. Bob Inglis -- who has infuriated Tea Party activists over the last year, condemning Rep. Joe Wilson's "You lie!" shout and pushing back on healthcare reform demagoguery -- could lose his primary to conservative Trey Gowdy. And Democrats will pick a challenger to Sen. Jim DeMint, though DeMint's seat in November is about as safe as you get. Polls close at 7 p.m. Eastern.

Virginia Republicans have a crowded, disorganized field of candidates vying to take on freshman Democratic Rep. Tom Perriello, who's so hated by Tea Party types that someone apparently tried to blow up his house during the healthcare debate (though they went after his brother instead by accident). The likely winner, state Sen. Robert Hurt, isn't much beloved by the conservative grass roots, either, since he voted for a tax increase in 2004. So an independent, Jeff Clark, might also run -- which could help protect Perriello. Polls close at 7 p.m. Eastern.

Arkansas Sen. Blanche Lincoln could be the third incumbent in the Senate -- and fifth member of Congress -- to lose a primary this year, in a runoff against Lt. Gov. Bill Halter for the Democratic nomination for the seat Lincoln holds. Unions and liberal activists have raised -- and spent -- millions of dollars on Halter's behalf, seizing the chance to punish Lincoln for her frequent splits with the party's base. Lincoln barely beat Halter in a May 18 primary, but fell short of 50 percent. Now the momentum (and the polls) appear to have swung Halter's way. If Lincoln wasn't able to seal the deal the first time around, observers wonder, how will she do it tonight?

Turnout could be significantly lower than in the primary, and Halter's allies think that means he'll win; his voters seem to be more committed than Lincoln's. But that's not necessarily the way the equation works. "If you're not sold on the incumbent at this point, your vote is likely going to go to the challenger," says Janine Parry, a political science professor and director of the Arkansas Poll at the University of Arkansas. "But it could also be on the flip side -- it could be that a runoff to a primary attracts a different sort of crowd," one in which only longtime Democrats, used to ignoring their disagreements with Lincoln in the name of holding the seat, show up.

Republicans think they'll wind up the winners no matter what. Either Halter wins, and they can immediately blast him as a union-backed liberal, or Lincoln wins, and she heads into the general election against the GOP's John Boozman roughed up and low on cash. But Democrats are hoping the state's history -- it rarely votes for Republicans except at the presidential level -- will make November competitive. Also, Democrats have runoff elections in two House districts, and Republicans have one in a third. Polls close at 8:30 p.m. Eastern.

Nevada There's almost no way Reid can win reelection this fall -- except with some help from Republicans. Which the GOP may be about to provide, in the Senate primary tonight.

The establishment favorite, Sue Lowden, thinks trading chickens for medical services is a sound healthcare policy. The surging Tea Party choice, Sharron Angle, is eccentric and hasn't ever faced much serious political competition. A third candidate, Danny Tarkanian (son of the former UNLV basketball coach), has been quiet lately. Polls show Angle may be leading, which Reid's campaign is thrilled about. By far the most conservative candidate, she's got the backing of local and national Tea Partiers, but not much else. With Gov. Jim Gibbons and Sen. John Ensign both facing scandals, the GOP is in disarray in Nevada -- meaning what should be a prime opportunity to knock off the Senate Democrats' boss for the second time in a row may slip away. (Meanwhile, Gibbons could lose his own primary to hold onto that job.) That would put Nevada in the same company as Kentucky -- places where conservative fervor has actually hurt Republican chances, not helped. Reid has bounced back a bit in recent polling, and once he starts spending some of the $9 million he's got in the bank, he could be in even better shape. Polls close at 10 p.m. Eastern.

California Former HP CEO Carly Fiorina looks like she's got the GOP Senate primary locked up -- which is fine with Democrats, who think Sen. Barbara Boxer would be able to fend her off this fall. Fiorina seems to have crushed rivals Tom Campbell (running a socially liberal, fiscally conservative campaign) and Chuck DeVore (the Tea Party pick), even after running one of the strangest campaign ads of the election cycle:

But ads like that one could make unifying the Republican Party to take on Boxer tougher this fall. And Fiorina, in the course of proving her conservative bona fides, has drifted into territory that California's blue-tinged electorate may not go for -- she thinks, for example, that people on the federal no-fly list should be able to buy guns, and has been outspokenly anti-choice and anti-gay marriage.

In the governor's race, meanwhile, another business tycoon-turned-Republican, Meg Whitman, is likely to steamroll opponent Steve Poizner. Like Fiorina, Whitman's campaign is at least partly powered by her own wealth; unlike Fiorina, Whitman -- the former CEO of eBay -- is breaking records along the way. (She's put $71 million of her own money into the race, paying her chief consultant, Mike Murphy, $90,000 a month.) Whitman would go on to face Democrat Jerry Brown, who leads in polls looking at November -- at least until millions of dollars in ads start raining down on him.

Democrats have their own competitive race to watch in California -- Rep. Jane Harman, a Blue Dog and a hawk on national security, faces a serious challenge from progressive Marcy Winograd. Winograd got a third of the vote in a 2006 race; in the rematch, with anti-incumbent fever sweeping the country, she could do better. Polls close at 11 p.m. Eastern.

Other races to watch Iowa Republicans will nominate a candidate to take on Gov. Chet Culver, a Democrat who faces the same general malaise his party is struggling with around the country. The choice is between former Gov. Terry Branstad and a more conservative rival, Bob Vander Plaats, who chaired Mike Huckabee's presidential campaign in the state two years ago. In Maine, both parties have crowded primaries to choose candidates to replace Gov. John Baldacci, a Democrat. And in a conservative district in Georgia, voters in a special election will choose a replacement for Rep. Nathan Deal, a Republican who resigned to run for governor -- but Democrats can't win the seat, as today's vote is a runoff between two conservative Republicans who finished at the top of the ballot last month.