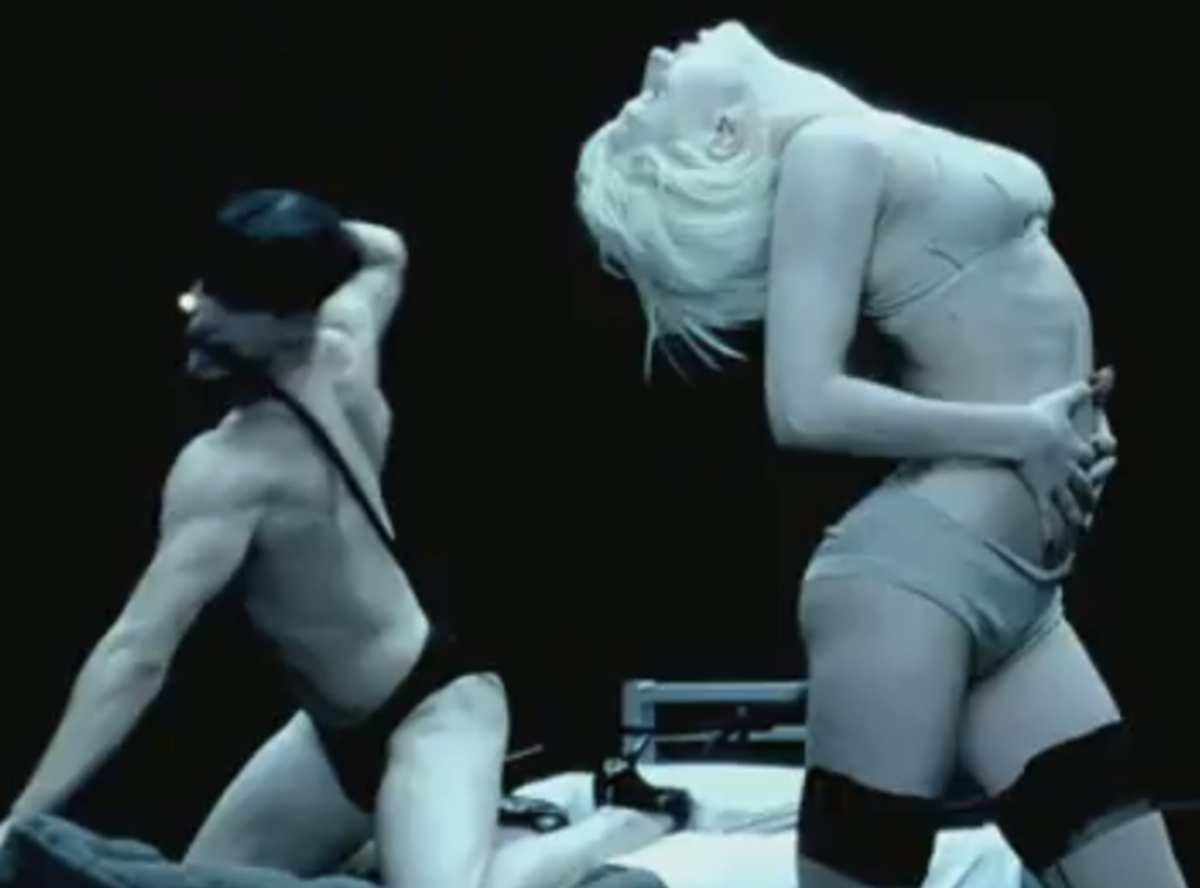 Lady Gaga, like her predecessor Madonna (to whom she pays homage -- or is that rips off? -- in her latest video), also owes a great deal to the gays. The latest Gaga epic, "Alejandro," opens on the image of a strapping young officer asleep at his desk wearing fishnet stockings and black pumps, with an AK-47 at arm's length. The next scene cuts to a fleet of shirtless men in black spanx (though they clearly have no need for them), sporting black bowl cuts, marching in black boots -- perhaps realizing conservatives' nightmare when DADT is repealed? But men in heels and carrying assault rifles aren't a contradictory image in the context of queer sexuality, fetish and kink. So exactly how queer is Lady Gaga's new music video? Oh, let us count the ways ...

1. Gender bending. Gay men wearing heels is nothing new, of course. But this isn't just about boys in girls' clothes; it's also about exploring feminine movement. One gentleman slinks around on the bed like calendar pinup. The dancers move behind Gaga in a synchronized mass, wave their arms out like tentacles and then draw them back in to do an update of the bend and snap. And there is a great deal of attitude in those snaps (most delightfully, the one to Lady Gaga’s left).

On the bed, Lady Gaga takes the dominant role and aggressively thrusts against her bowl-cut twin doggy-style. (And what straight woman has imagined doing something similar to a beautiful gay man?) On another level, it's a more subtle play on the old Internet rumor about Lady Gaga and her penis. However you read it, this is not your typical girl-on-boy.

2. (P)leather daddies. It's hard not to read the Freudian subtext in the line, "But a boyfriend's like a dad, just like a dad," as Gaga wrestles with her lover in bed. Does Lady Gaga just want a gay leather daddy?

The video's extreme leather fetish -- from Lady Gaga's oversize motorcycle jacket and pleather nun's habit to the dancers' thick black boots -- is like Givenchy at the Folsom Street Fair. Of course, you rarely have leather without ...

3. S/M. We see the classic signifiers: Choke-holds and ropes and whips. One dancer shoves his partner's hips to the ground, grunting like a Marine. A man in spiked headgear with strings around him bookends the video: He really just needs a leather face mask that zips across the mouth. Indeed, the question of power, authority and violence is a pall that hangs over the video, much darker than her previous offerings.

In May, Lady Gaga told the Times Online, "[The video is] a celebration and an admiration of gay love -- it confesses my envy of the courage and bravery they require to be together." And just in time for Gay Pride.