Defying expectations, the two-term Democrat prevails in a runoff. But she'll be a prohibitive underdog in the fall 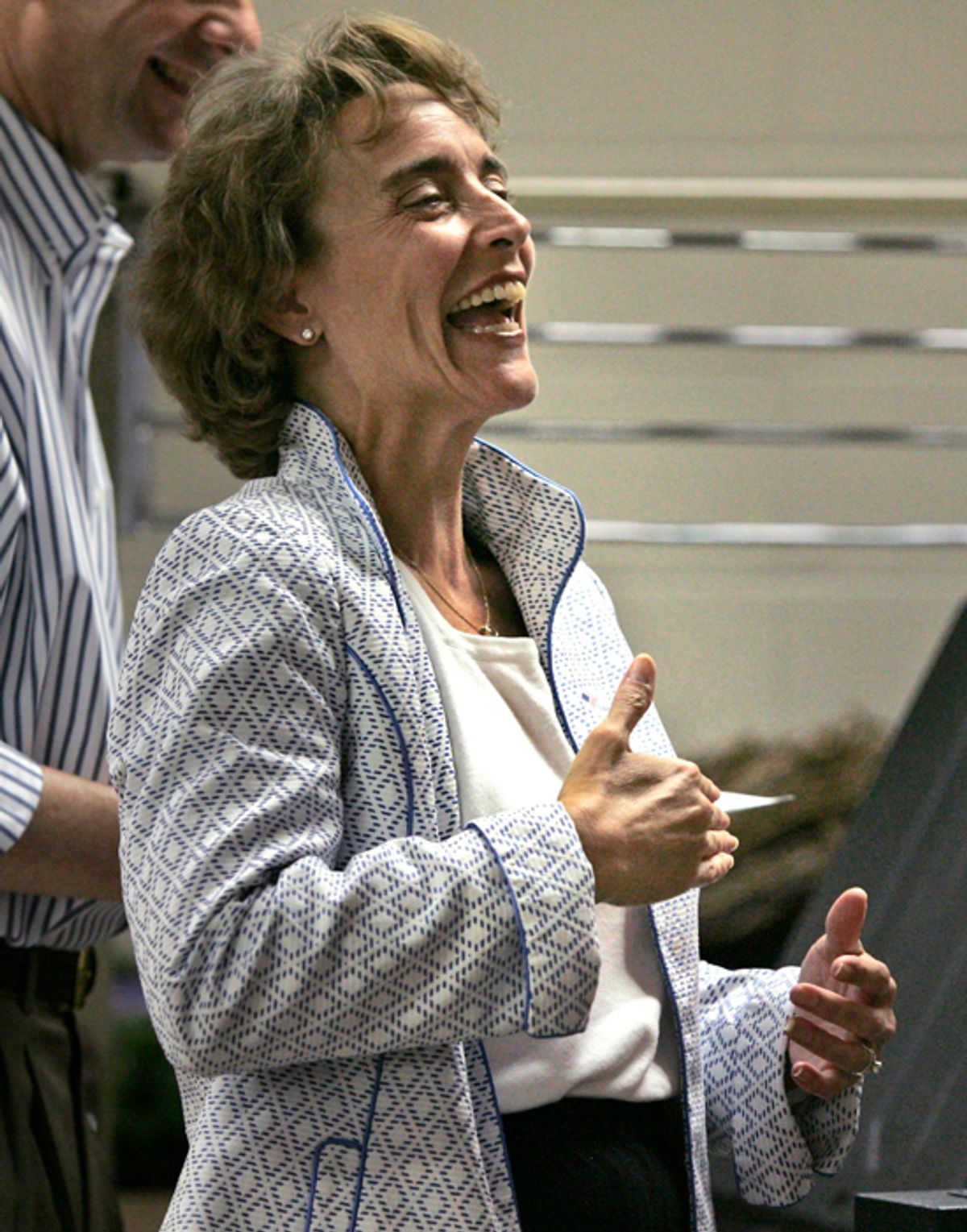 Just when it looked like the powers-that-be in Congress would have to start setting aside meeting space for another group besides just Democrats and Republicans -- call it the lame duck caucus -- Sen. Blanche Lincoln defied the anti-incumbent odds Tuesday night.

Lincoln narrowly escaped becoming became the fifth member of a not-so-illustrious club of incumbents who lost primary challenges Tuesday, beating Lieutenant Gov. Bill Halter in a runoff election for the Democratic nomination for the job she holds now. It was a defeat for progressives, who had longed to dump the moderate-to-conservative Lincoln; unions spent millions supporting Halter -- and attacking Lincoln for voting for NAFTA, opposing the Employee Free Choice Act and wavering on healthcare reform, among other perceived heresies. MoveOn.org kicked in another few million, and groups like the Progressive Change Campaign Committee and Daily Kos readers sent several hundred thousand dollars each. (The U.S. Chamber of Commerce, meanwhile -- which almost always supports Republicans -- spent $300,000 on ads for Lincoln, though labor officials noted that the Chamber more or less let Lincoln go once the race went to a runoff.)

"The vote of this senator is not for sale, and neither is the vote of the people of Arkansas," Lincoln told supporters at her victory party Tuesday night -- a party that, until the returns started coming in, was widely expected to be a farewell. "This is about us. This is about who we are as Arkansans and what we want to do."

For all the support from the left, Halter wasn't exactly the second coming of Franklin D. Roosevelt. He said he would have voted for healthcare reform if he had Lincoln's job last year, and he would have opposed the Troubled Assets Relief Program, the original Wall Street bailout. But beyond that, the main differences between them throughout the campaign had to do with tone and style. Halter -- who hasn't worked in Washington since a stint in the Clinton administration -- played the outsider perfectly, railing against a broken government even though his own party controls it. Lincoln, meanwhile, was stuck taking the brunt of both a general anti-incumbent ire and a specific grudge against her by some Democrats who think she too readily abandons the party to prove her centrist credentials.

But the primary challenge seemed to have sharpened Lincoln's campaign instincts. Arkansas insiders told Salon the buzz in the state was that the incumbent had started visiting and calling people she hadn't talked to in a while; the prospect of losing helped shake her into doing the stuff politicians need to do as a matter of course to avoid getting into trouble in the first place. Halter pushed her to the left on Wall Street reform -- the tough language cracking down on derivative trading that she backed probably would have been jettisoned immediately if Lincoln didn't have Halter to worry about. That may have put her on better footing for the general election, as well; it gives her a populist message to hammer away at through the fall against Republican Rep. John Boozman.

In the last couple of weeks, Lincoln really hit a new stride as the embattled Arkansan, under fire from the forces that control politics. It's not easy for an incumbent seeking a third six-year Senate term to play the outsider, but the union ads gave Lincoln a foil. She paired that with a steady stream of reminders that she was the first Arkansas lawmaker to chair the Agriculture Committee, emphasizing the clout that comes along with incumbency. Lincoln also leaned heavily on Bill Clinton, who came to campaign for her and appeared in her closing TV ads -- warning Arkansans not to let outside forces "use" them to send a message.

The Washington Democratic establishment was always sure Lincoln was a better candidate for November, and they couldn't resist gloating a bit Tuesday.

"Blanche has proven once again she is a true independent voice for the people of Arkansas, but she is also a fighter for what she believes in and will never stop standing-up for her convictions or for her state," Democratic Senatorial Campaign Committee chairman Bob Menendez said.

The GOP was set to paint Halter as a captive of liberals, unions and other scary boogiemen that don't play that well in an Arkansas general election. But Boozman still starts the race as the favorite. Privately, some of the establishment Democrats who backed Lincoln -- in part because they prefer incumbents, even conservative ones, because they usually have an easier time winning elections -- fumed that labor and the Netroots wasted money on Halter's race that other Democratic candidates might wish they had on their side come November. Spending millions of dollars (and forcing Lincoln to draw down her own bank account) on a losing challenge won't be easy to spin.