Culinary diplomacy at the Axis of Evil Cafe

The Conflict Kitchen serves only food from places Americans are supposed to hate. Can taste create understanding? 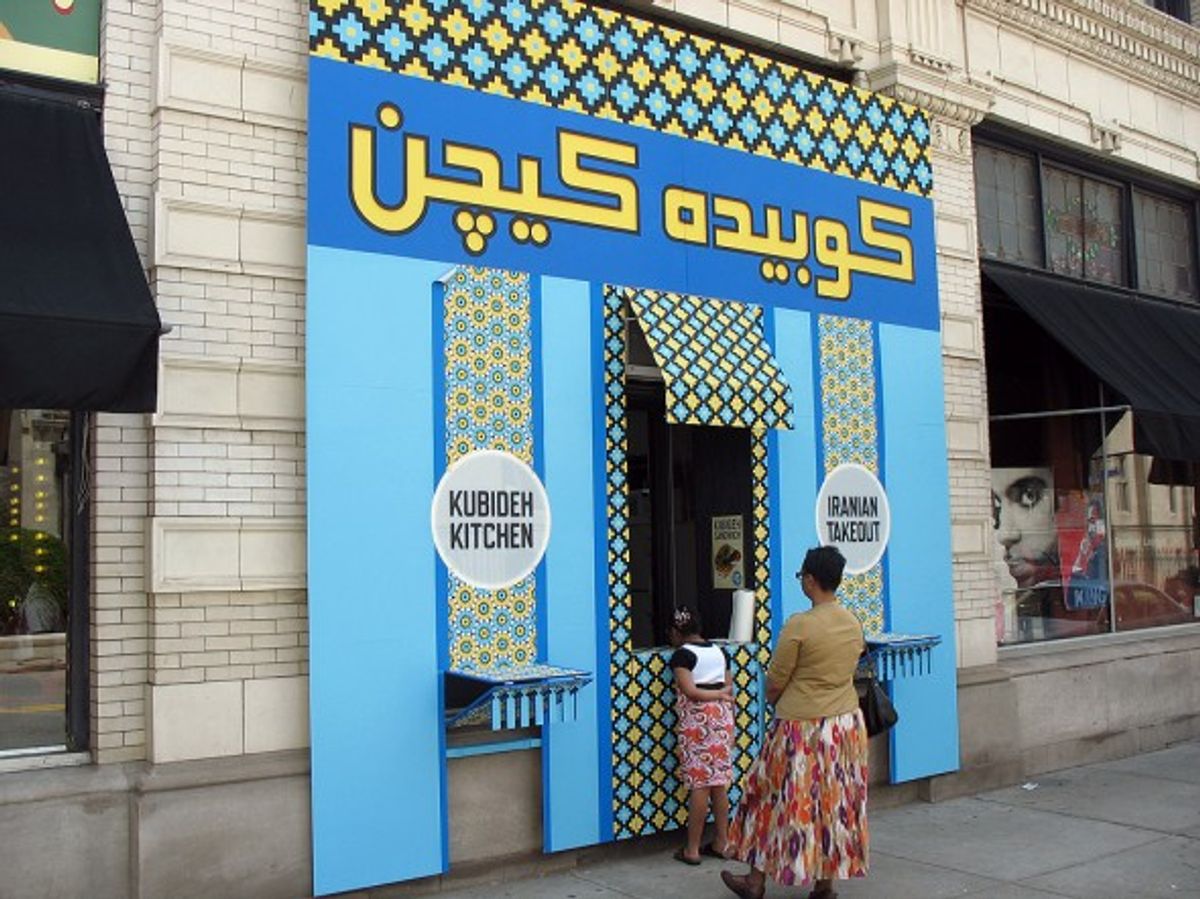 Craving a bowl of North Korean noodles? Or maybe you're looking for your fix of lamb kebabs, a specialty of the Afghan capital? Head over to the Conflict Kitchen, a Pittsburgh takeout restaurant whose most distinctive feature is that it only serves dishes from countries that the United States is ... let's just say not exactly best friends with.

Started by a group of artists, the Conflict Kitchen has, in its first iteration, taken the form of the Kubideh Kitchen, a blue-and-yellow stall that sells kubideh, an Iranian ground beef patty sandwiched between barbari flatbread and garnished with onion, basil and mint. "We're using food as an entry point to help people explore cultures that aren't talked about in the mainstream media," says Jon Rubin, an assistant professor of art at Carnegie Mellon University. The idea isn't to create political controversy ("We don't support the Iranian government or anything," says Rubin), but to help people see these countries as everyday, human places that are defined by more than just their policies and government.

Rubin and his collaborators, John Pena and Dawn Weleski, worked with the local Iranian community to create the dish. The sandwich is packaged in a blue, green and yellow paper that is lined with the opinions of Pittsburgh's Iranian residents, covering everything from poetry to Iran's Green Revolution. "The younger generations play Persian and Western music banned in public ... Defying the regime's propaganda is an honor for Iran's baby boomers," says one box titled Youth.

On June 5, the Conflict Kitchen held its first public event, a meal held simultaneously in Pittsburgh and Tehran, where diners in both cities sat around long tables that were joined via webcam: an international dinner party. They ate the same food -- chicken stew with pomegranate and walnuts, a beef stew with dried limes and greens and crusty, bottom-of-the-pot rice, and talked to each other with the help of a microphone and speakers.

The conversation started safely, with talk of food -- how Americans buy bread (from supermarkets) versus how Iranians buy bread (fresh from the bakery every morning) -- before veering into the related topic of growing your own herbs (almost a universal practice in Iran) and eventually morphing into an edgier discussion about dating and politics and larger commonalities -- two young graduates talked about the difficulty of finding a job after getting their college degrees.

"Eating the same food provided everyone with a level ground. They begun to find commonality in their experiences through the way the food smells and tastes," Weleski says. In other words, the shared sensory experience, the intimacy of eating a meal together can take the edge off what can otherwise be a potentially antagonizing situation.

And, of course, there was the fact that food is irrevocably connected to most aspects of our lives, from religion and society to politics and identity. Conversations about food frequently grow into larger conversations about the world around us.

Just next door to the Conflict Kitchen is the Waffle Shop, another project by Rubin and Weleski that serves homemade waffles and allows diners to participate in a talk show (either as host or participant) that is broadcast over the Internet. Here, too, says Rubin, is the idea that people can be seduced via their stomachs to engage with things that they are otherwise unfamiliar with, be it going up onstage at a talk show or asking questions about a completely alien -- and often vilified -- foreign culture.

Recently at the Waffle Shop, a young black man and an 80-year-old Jewish woman engaged each other in a frank conversation about race. Another man came out to his father. At the Kubideh Kitchen, a Japanese Buddhist customer and a Muslim man discussed religion and food while a half-Iranian, half-American woman talked about how difficult it was for her to live with two hugely differing identities.

So what exactly is it about food that helps facilitate these conversations? "Eating comfort food like waffles or sandwiches helps people open up," says Rubin. Maybe it's the endorphin release that happens after a great meal, but it's an undeniable fact that good food can soften us, turn us into defenseless, vulnerable versions of our pre-meal, hungry selves, in a way that little else can.

If the successes of the Conflict Kitchen and the Waffle Shop are anything to go by, there's an important lesson to be learned here: that food can be used as both an amelioratory salve and as an invitation to open up. Now if only we can ply those Israeli soldiers with caramel chocolate popcorn and pizza.