The copyright wars come to "Glee"

Could real high school kids get away with such reckless appropriation of commercial pop music? 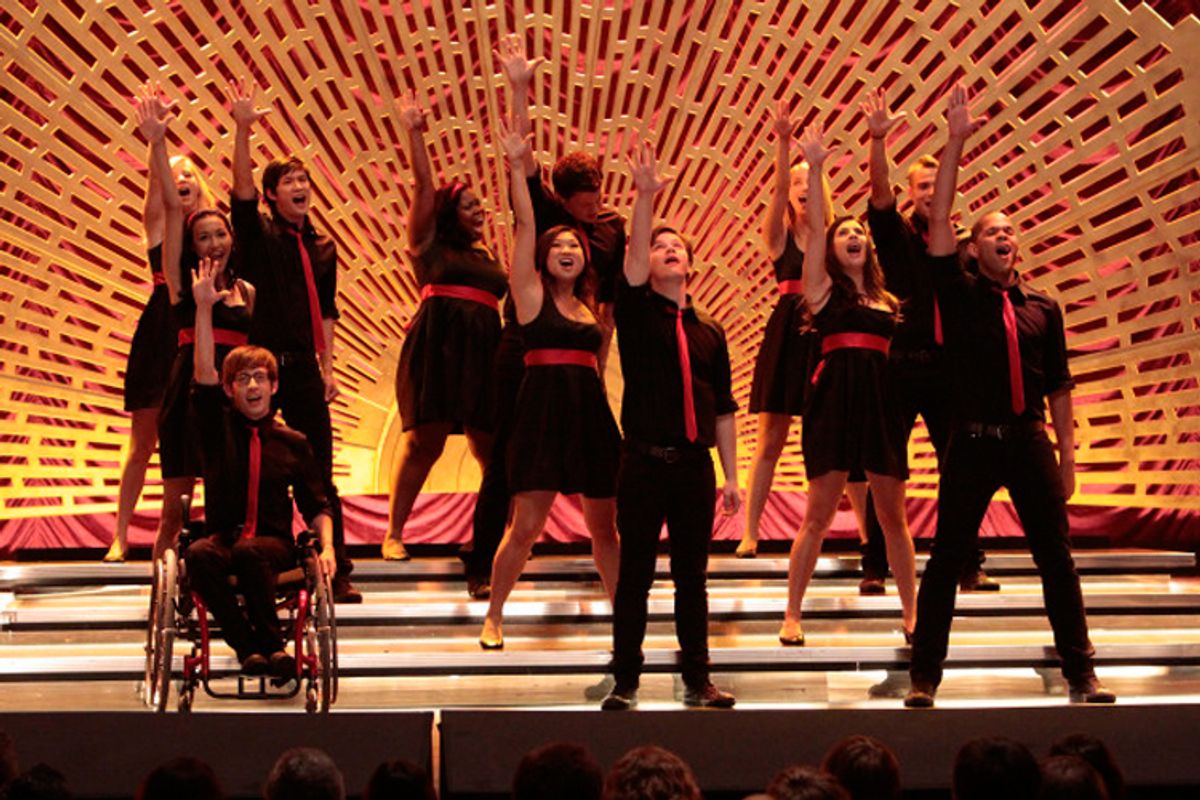 It's always fun to see an expression of pop commercial froth as explicitly fanciful and studiously non-serious as "Glee" get chewed up, deconstructed, regurgitated and analyzed down to the last quark for the purposes of satisfying the omnivorous hunger of the 21st century cultural punditocracy. There is nothing so insubstantial that a mountain of explication and criticism can't be built on top of it, and when you have a legitimate mass sensation, such as "Glee," no holds are barred.

And we all bring our own axes to the party. Today's entry, "Copyright: The Elephant in the Middle of the Glee Club," a post at the group blog Balkinization by Christina Mulligan, a visiting fellow of the Information Society Project at Yale Law School, is a perfect example. (Thanks to a tweet from Glyn Moody for the tip.)

The fictional high school chorus at the center of Fox's "Glee" has a huge problem -- nearly a million dollars in potential legal liability. For a show that regularly tackles thorny issues like teen pregnancy and alcohol abuse, it's surprising that a million dollars worth of lawbreaking would go unmentioned. But it does, and week after week, those zany "Glee" kids rack up the potential to pay higher and higher fines.

Mulligan's conceit is that if a "real" glee club tried to get away with creating, say, "a near-exact copy of Madonna's Vogue music video," it could be liable for huge fines -- as much as $150,000, or worse, if those reckless teenagers posted their work online. Don't scoff -- as Mulligan notes, "In the 1990s, the American Society of Composers, Authors and Publishers (ASCAP) asked members of the American Camping Association, including Girl Scout troops, to pay royalties for singing copyrighted songs at camp." So watch out!

The absence of any mention of copyright law in "Glee" illustrates a painful tension in American culture. While copyright holders assert that copyright violators are "stealing" their "property," people everywhere are remixing and recreating artistic works for the very same reasons the "Glee" kids do -- to learn about themselves, to become better musicians, to build relationships with friends, and to pay homage to the artists who came before them. "Glee's" protagonists -- and the writers who created them -- see so little wrong with this behavior that the word 'copyright' is never even uttered.

This is all true enough, and I have plenty of sympathy for anyone who wants to argue that copyright laws are all screwed up. But Mulligan is missing an essential point. "Glee" is itself an example of a new business model for generating revenue from popular music in an era where old business models, based on now-unenforceable copyright laws, have crumbled under the pressures of the digital era.

Glee is a music business revenue machine. The cast spawned 25 Billboard top 100 singles in 2009. According to an Advertising Age story, published in February, "the show has spawned more than 4.2 million downloads of songs featured in its episodes, as well as two gold albums."

"Glee" produces its own music, which can then be sold for revenue. Twentieth Century Fox and the record label that distributes and markets the music, Sony Music's Columbia, share in the revenue and the studio puts the money back into the cost of producing the show at present.

"Glee," the show, is an example of how the entertainment industry will find ways to survive in an environment in which the traditional enforcement of copyright laws has become, for all practical purposes, impossible. Spend a few minutes on YouTube and you can find a practically infinite number of glee clubs performing copyrighted tunes. If anything, the success of "Glee" is feeding an amateur frenzy of performance, even as it mints money from its own performances.

We're going to see more such hybrid beasties, as "Glee's" model gets copied, or tweaked or ripped off by imitators. And I'm betting that in the not too distant future, we'll look back at those crazy days of the early 21st century, when the producers of entertainment actually attempted to criminalize the behavior of those most likely to consume their product, as wackier and more unrealistic than anything that ever happened on the show "Glee."